Roof Ops and Residential Garage Fires - How do you do it? 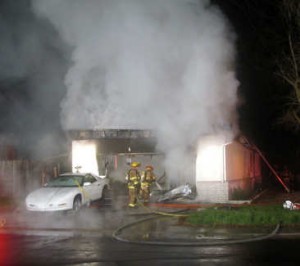 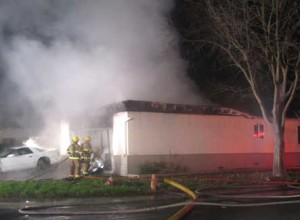 On January 1, 2010, Modesto Fire Department responded to a residential structure fire that was started in the garage from the residents using a candle to provide light while filling a gasoline generator. The resulting fire engulfed the garage and prompted the decision to have the truck company perform vertical ventilation OPS on the roof in concert with engine companies dealing with extinguishing the fire.

RIC Team In Place Two truck company firefighters fell through the roof while performing ventilation operations. The good news here is that a RIC team was set up and in place. When the mayday was issued, the two firefighters were immediately located, removed and turned over to EMS on the scene. This was a text book operation for bread and butter residential structure fires with contingencies in place, should something go wrong.

Fuel Loading: We all know about fuel loading right? Lot's of fuel in the garage (e.g. cardboard boxes, books, newspapers, car, lawn mower, edger, gas cans, hazmat, you know, common stuff...) means that you will have a lot of heat generated, which of course lends itself toward accelerating the intensity of the fire and the eventual structural failure and collapse of the roof.

Truss Construction and Gusset Plates: Couple this with the common use of gusset plates that are used for Truss Construction where you have a piece of metal with pointed spikes punches through the metal connecting pieces of wood to create a truss.

This is great for companies mass producing homes today but not great for us considering that there is not much purchase for the gusset plate to attach itself to the wood. Remember when we actually used nails to build homes? This is a big enough issue that even the CDC has issued a warning for firefighters. Please take the time to review this.

What prompted me to create this post was the following quotes from the Modesto Bee newspaper:

““There was a catastrophic failure on the roof and the two firefighters fell through,” Patino said. “Upon collapse, the mayday was reported. The intervention crew was pressed into service and within a couple of minutes, they had both firefighters out.”

Patino said the intensity of the heat caused the roof to collapse significantly sooner than usual, adding that he was told by crew member that he had never seen a roof fail in that short amount of time.”

The CDC / NIOSH report specifically warns and lists three scenarios that can occur in which fire fighters suffer fatalities and injuries while operating at fires involving truss roof and floor systems: 1. While fire fighters are operating above a burning roof or floor truss , they may fall into a fire as the sheathing or the truss system collapses below them.

2. While fire fighters are operating below the roof or floor inside a building with burning truss floor or roof structures , the trusses may collapse onto them.

3. While fire fighters are operating outside a building with burning trusses , the floor or roof trusses may collapse and cause a secondary wall collapse. 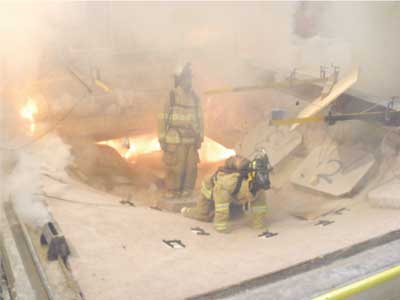 Fire Engineering wrote an exceptional article on the subject that gets into much more of the process of why things collapse and the times associated depending upon how things are constructed and the specific materials. This chart gives a good general idea as to how long you have before structural collapse can occur...

Key Question: My question for the more experienced engine company and truck folks out there is how do you approach residential structure fires where the garage is fully involved?

Permalink Reply by Ben Waller on January 2, 2010 at 9:57pm
In most cases, there is no reason to vent the roof on a one-story SFD. If the fire is in a new-construction home, then the roof is definately a bad place to be.

If you need a large ventilation opening, forcing and raising the garage door, then propping it open will vent more quickly and effectively than any amount of roof work.

If you can't open the garage door, you can cut large openings very rapidly with a K-12 or other cut-off saw. The "Inverted L" cut will make a huge hole in only a minute or two. It only takes two firefighters, the saw, and a hook.

Permalink Reply by Loyd Dittfurth on January 2, 2010 at 10:07pm
lol I ment cool not good sorry

Permalink Reply by Station10Capt106 on January 2, 2010 at 10:10pm
very good points made here. We have been reassessing our tactics alot the past 5 years as we have to deal more and more with newer construction. Very rarely will we go on a roof to ventilate. Most of our ventalations are horizontal. partially because we are a volunteer department and sometime lack the manpower needed to place ladders and such. Much easier, quicker and safer to do horizontal.

The videos from the UL is a great training tool. I used them for a couple training sessions last year.

Permalink Reply by Ben Waller on January 2, 2010 at 11:45pm
With a SFD built with non-dimensional lumber, by the time you get the trench cut completed, either the fire will be out or the roof will collapse, or both.

Permalink Reply by Jack/dt on January 2, 2010 at 11:58pm
Lightweight construction or not, it's a garage. Once fully involved what's the point of a trench cut? Moreover, where would you make it? The trench cut is essentially there, where the garage meets the house, the house is in essence a substantial fire wall. I can see a trench cut on a strip mall to stop the fire from running the length but a residential garage, I just don't see the point of it, or any cutting on the roof for that matter. I can see the idea of cutting a big hole on the charlie side wall and pushing it out the front, if the need to cut something is that overwhelming.

Permalink Reply by Loyd Dittfurth on January 3, 2010 at 1:20am
i said I ment cool not good lol

Permalink Reply by Doug on January 3, 2010 at 1:39am
They both died? I thought they were both seriously hurt with non-life threatening? :(

Permalink Reply by Mike Schlags (Captain Busy) Retd on January 3, 2010 at 2:00am
Thank you for reinforcing this lesson. we will have to wait for the NIOSH report as to why vertical ventilation was used and why firefighters were on the roof of a SFD... what is important here is that discussion and reinforcement for what one should do has been successfully accomplished and backed up by our more experienced members of FFN.

Permalink Reply by Mike Schlags (Captain Busy) Retd on January 3, 2010 at 2:01am
You always have my six. Gracias'

Permalink Reply by Russell Yount on January 3, 2010 at 9:45am
You mentioned videos from the UL about this. I think this might be beneficial for my department. WHere can I get my hands on these videos?