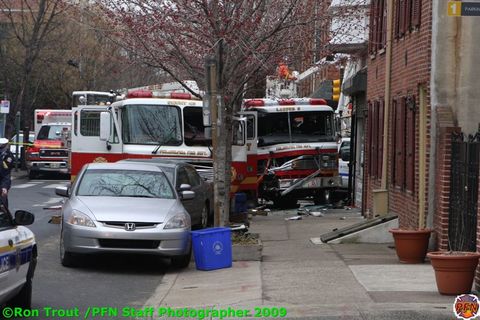 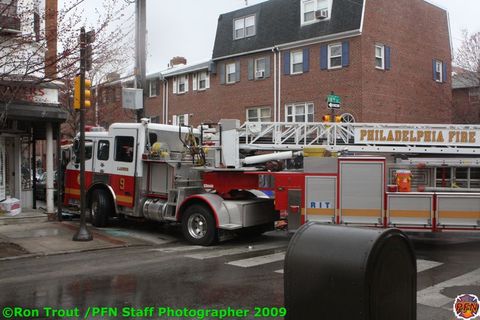 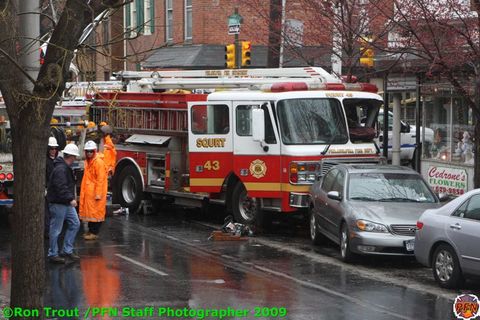 Raw Video of the Scene:

Fire Commissioner Lloyd Ayers said none of the injuries appeared life-threatening after the crash, which involved a ladder truck and a fire engine in a residential neighborhood.

The most seriously injured firefighter, a lieutenant on the ladder truck, was knocked unconscious and had to be cut from the wreckage.

Ayers said he spoke at a hospital with the injured lieutenant, whose first question was, "How's my guys?"

No other injuries were reported, but a woman inside a flower shop nearly struck by the ladder truck was taken to a hospital for observation because she was shaken up, Ayers said.

The cause of the crash was under investigation.

Four other fire trucks made it to the two-story home where the fire was reported and extinguished the flames.

The Philadelphia Inquirer reports that the most seriously injured was the lieutenant on board Ladder 9, who was knocked unconscious and had to be extricated. He was conscious at a local hospital and did not appear to have life threatening injuries.

PhillyFireNews.com reports that Ladder-9 (a tiller) and Squirt 43 struck each other at 9th and Lombard while enroute to a box assignment.

Permalink Reply by Tom Aiello on March 19, 2009 at 3:16pm
Does Philadelphia have a Rad-A Lite system installed at intersections. Or was this a Stop sign intersection?

Permalink Reply by Tom Aiello on March 19, 2009 at 3:19pm
From the photo's it appears to be an intersection with lights. Maybe they could take a lesson from Erie Fire Dept. and install a lighting control device on the Apparatus and intersections. somewhat expensive but does go a long way in preventing such occurances.

It's cheaper to replace the apparatus then it is to put devices on all the intersection lights in a city the size of Philly. Since Mayor Nutter is crying super poor and since they've closed a few companies, I bet they just pull an engine and ladder out of reserve status and that's that. I hope the brothers injured have a speedy recovery.

Permalink Reply by Brandon on March 19, 2009 at 3:35pm
I really hate hearing about these kinds of things.
No news on how it happened im guessing.

Permalink Reply by Dave Kearney on March 19, 2009 at 3:37pm
No Opticon or other system. City tested several yaers ago and decided not to go with it because it is cheaper to pay for accidents!

Both of these companies were responding from a location not in thier area to another area, also out of thier local, because of company closings instituted by the Mayor January 5, 2009.

Permalink Reply by pete jubie on March 19, 2009 at 3:43pm
Sad day in the servce. prayers to all that got hurt. cannot comment on the incident, investigation will tell all.

Permalink Reply by Tom Aiello on March 19, 2009 at 3:43pm
I would agree with you on the speedy recovery. But what price is a life worth? Mayor Nutter needs to talk to the previous Mayor of the small city of Erie. (Joyce Savoccio). You and I both know of the risks we take everyday . I for one have been around awhile and it has been my experience that after the horse leaves the barn it is to late to lock the barn door. Anyway without a great deal of lecturing Stay low and stay safe.
Tom

Permalink Reply by Lou Angeli on March 19, 2009 at 4:17pm
"These closings will have no significant impact on fire department response or the safety of our citizens."
Mayor Michael Nutter

Nine good men had to suffer in order to prove your comments were wrong then -- and remain wrong now!

Permalink Reply by James Quagliano on March 19, 2009 at 4:20pm
There is a device that is already installed on ALL fire apparatus that would totally prevent ALL these accidents.

It's called a BRAKE PEDAL. My department requires us to STOP at all intersections. Even when running lights and siren to a call.

Permalink Reply by pete jubie on March 19, 2009 at 4:24pm
In NYS, we have a due reguard law for all emergency vehicles. To me, and this is after the seeing the aeral view, due reguard was not used. We are taught to stop at all intersections, does not matter about the control devices.