FFN - A Cape Vincent, New York man who lived and breathed emergency services was tragically shot and killed by a man he was trying to help Friday night.

Mark Davis, 25, a two-year member of the Cape Vincent Fire Department, was reportedly gunned down by Christopher Burke. Davis and other crew members were attending to Burke when the victim left the room, returning with a rifle, according to news reports.

The crew tried leaving the situation, but two shots rang out, with at least one striking Davis. 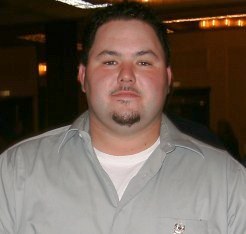 Mark Davis, 25, died after being shot by a victim he was attempting to help.
Photo from TI-Rescue.org -- Browse More
"EMTs at the scene fervently attempted life saving measures, and continued these efforts during the ambulance transport to the Samaritan Medical Center in Watertown, NY where he was pronounced deceased," a New York State Police report said. (WWTI Photo Slideshow - News 10 Video)

Davis was a member or employee of several emergency organizations in the area, WWTI reported in a profile of the victim. He was enrolled in a paramedic program at a local college and worked ful time at an ambulance company in Watertown, New York.

The Thousand Islands Emergency Rescue Service, where Davis was a volunteer since 2007, posted a tribute to him online Saturday.

"He was one of those guys that EMS was what he lived for," Cape Vincent First Assistant Chief William E. Gould II told the Watertown Times,

Burke was arrested and charged with second degree murder, WYSR reports. He was arraigned Saturday morning.

WWTI reported that police were not yet revealing what type of emergency EMS crews were on the scene for.

Cape Vincent is about 90 miles north of Syracuse, near the Canadian border.

Permalink Reply by Eddie Valentine on January 31, 2009 at 12:18pm
our thoughts and prayers go out to his family and members of his department. If anyone hears of the details of his wake and funeral please post them

Permalink Reply by Tim Huskins on January 31, 2009 at 12:26pm
This is a very sad time for the Cape Vincent FD/EMS and for the Davis family. I was stationed at Ft. Drum which is not to far from Cape Vincent and I know that Mr Davis will be truely missed by all who knew him. God Bless the Davis Family. But we also need to remember the family of the person who shot Mr Davis. No details have been posted on what the EMT's were trating him for or what may have set him off. Please keep both familes in your prayers.

Permalink Reply by Robin Inman on January 31, 2009 at 12:26pm
My thoughts and prays go out to Mark Davis' family and friends and to the Cape Vincent Unit. What a horrible and senseless tragedy......all we want to do is help people. Rest in Peace Mark and know we look up to you as the hero you are.

Permalink Reply by William Kahn on January 31, 2009 at 12:32pm
That's just adding to the problem. Following protocol to potentially dangerous scenes is the right thing to do. When in doubt, stage for the Police. Let them secure it before we go diving in to patch up the wounded.

Permalink Reply by PFC Harmon on January 31, 2009 at 12:38pm
This is happening more and more, are the police going to have to respond first to every EMS call and fire? May god be with this hero, his department and family.

Permalink Reply by Eric on January 31, 2009 at 12:45pm
Another senseless tragedy. May he rest in peace. Thoughts prayers and condolences to his family.

Permalink Reply by Car-10 on January 31, 2009 at 12:47pm
And civilians wonder why we can come to hate people. what an asshole. RIP brother, and everyone else STAY SAFE. and to William Kahn : Yes we should be able to defend ourselves, whether it means carrying a gun or some kind of defense, there are just to many sickos out there to know who is who.

Permalink Reply by lisa on January 31, 2009 at 12:53pm
RIP..are prays are also with his family and department