Eight firefighters and a gas company worker were injured in an apparent natural gas explosion in Forestville, Maryland this afternoon. 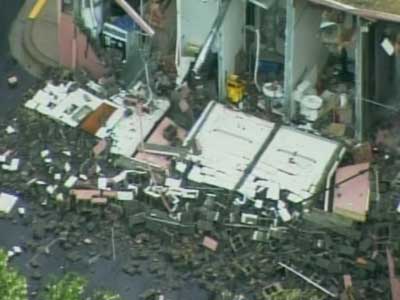 Four of the firefighters and the gas worker were taken to the Medstar Burn Unit at the Washington Hospital Center. Two of the firefighters have since been treated and released. Two others, including a captain seen in the white helmet in the video above, are being held overnight for observation.

According to Prince George's County Fire/EMS Department Chief Spokesman Mark Brady, the fire department received a call around 12:55 PM for a report of a natural gas leak. They arrived at 3426 Donnell Drive and evacuated a number of businesses at the Penn Mar Shopping Center. Brady said 45 people were ushered out of the building.

At about 1:23 PM, with the gas company on the scene, an explosion occurred, causing the destruction of about 5 store fronts. A flash fire resulted. Firefighters and the gas worker were injured by both the fire and flying debris.

The building was so heavily damaged firefighters were not able to immediately go back in and search to make sure everyone got out safely.

On the firground audio you can hear a report from the rear of the structure that fire had broken out while firefighters were venting the structure. Moments later, as command attempted to determine what was burning, the explosion occurred and maydays were called.

Permalink Reply by Peter Lupkowski on May 8, 2009 at 10:40am
Statter has the fireground audio. Well commanded before and after the explosion. Good luck to the injuried.

Permalink Reply by Mick Shelley on May 8, 2009 at 11:34am
We responded to a gas leak at a substation once. As we were about a mile from it
All we could see was a huge fire ball, after the loud explosion, we even where able
to feel it from a mile away. Upon arrival, the substation was gone. Everything in,and
around the area was leveled. Thank god it didn't blow when we had arrived, otherwise
it would have been a loss of several firefighters.
I guess what I am trying to say is DON'T Fool yourself when it comes to a gas leak.
It's like a bomb going off. Stay clear until the main source is turn off by the utility
company. I do prey that the four firefighter make a full recovery.

Permalink Reply by Bill Brierton on May 8, 2009 at 4:18pm
UPDATE: Two fire fighters remain at Washington Burn Center in good condition, all others were released from the hospital. I am very glad nobody was seriously injured or killed.

The PPE gear that everybody was wearing at that time of the explosion kept personnel from serious injuries. Just goes to show that even on a potential BS type call like this it is good to wear your gear.

Permalink Reply by Derek R. on May 10, 2009 at 1:26pm
Thnx for the update, very glad to hear that all are recovering. And I agree with the above comment....ALWAYS wear you PPE. Stay safe brothers and sisters..

Permalink Reply by PFC Harmon on May 10, 2009 at 2:16pm
I hope everyone recovers, I work for a gas utility and go on calls like that everyday. Gas is dangerous and unpredictible again my prayers go out to the injured and thier familys.

Permalink Reply by Bill Brierton on May 29, 2009 at 3:34pm
Well all those who were injuried have been released from the hospital and either have returned to work or shortly will. The cause of the explosion was due to a short in an electrical panel in the unoccupied business that was being renovated. Apparently gas seeped up from underneath and the electrical panel sparked and that was all she wrote.

Our engine was parked about 20 feet away when the explosion occured and only suffered minor glass damage from the building.

Permalink Reply by Brian Boeseneilers on May 29, 2009 at 4:58pm
Never let your guard down on a "smell of gas" call. I hope everyone makes it out of this ok.