SYDNEY (AP) -- It was a chance encounter in the charred landscape of Australia's deadly wildfires: A koala sips water from a bottle offered by a firefighter. David Tree noticed the koala moving gingerly on scorched paws as his fire patrol passed. Clearly in pain, the animal stopped when it saw Tree. 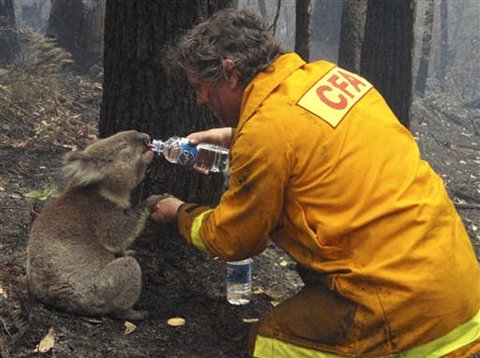 Local CFA firefighter David Tree shares his water with an injured Australian Koala at Mirboo North after wildfires swept through the region on Monday, Feb. 9, 2009. Suspicions that the worst wildfires ever to strike Australia were deliberately set led police to declare crime scenes Monday in towns incinerated by blazes, while investigators moving into the charred landscape discovered more bodies. The death toll stood at 181.(AP Photo/Mark Pardew)

"It was amazing, he turned around, sat on his bum and sort of looked at me with (a look) like, put me out of my misery," Tree told The Associated Press on Tuesday. "I yelled out for a bottle of water. I unscrewed the bottle, tipped it up on his lips and he just took it naturally.

"He kept reaching for the bottle, almost like a baby."

"I love nature, and I've handled koalas before. They're not the friendliest things, but I wanted to help him," Tree said.

Often mistakenly called koala bears because they resemble a child's teddy bear, the marsupial is actually a rather grumpy creature with a loud growl and sharp claws. It rarely comes down from the trees and doesn't like walking.

Koalas are especially vulnerable to wildfires because they move slowly on the ground.

The wildfires cut through parks and forests and sent countless wombats and other native species fleeing. One resident reported seeing kangaroos bouncing down the road with flames at their backs.

A count of the animals killed has not been made.

Tree said he found the koala in a burned-out forest near Mirboo North, about 90 miles (150 kilometers) east of Melbourne, Victoria's capital.

Koalas normally drink almost no water because they get almost all their fluids from the leaves they eat.

After the scorched koala sipped from the water bottle and Tree's crew moved on, animal welfare officials came by.

Coleen Wood, manager of the Mountain Ash Wildlife Shelter where the koala was taken for treatment of second- and third-degree burns to its paws, said Wednesday that it was expected to make a full recovery.

Wood said there was no doubt the animal was wild, not domesticated, and that it would be released back into nature once a suitable habitat is found _ the foliage in Sam's forest was all but destroyed.

"The hardest part is going to be trying to find enough habitat to support these guys," Wood said.

The Royal Society for the Protection of Animals said it was establishing shelters to care for thousands of pets and livestock affected by the fires.

For donation information on the Net: http://www.redcross.org.au

Permalink Reply by Mary Ellen Shea on February 11, 2009 at 11:29pm
I've seen this all over the internet, and it doesn't get old. Whether it's the sentimentality or the stark contrast, it still serves to draw attention to the fact that our Southern Hemisphere brothers and sisters are fighting a hellish battle.
Pray for their safe return.

Permalink Reply by Wayne Martin Harvey on February 11, 2009 at 11:49pm
The Koala was destined to be saved when rescued by David Tree and Colleen Wood.Out of one tree to another from one wood to another.Well done guys,believe two people have been arrested so far,hope they get the full brunt of the law.Wayne Harvey

Permalink Reply by Trisha Stanfield on February 12, 2009 at 12:27am
For a rough and tumble Aussie, David Tree is one heck of a gentle bloak! Good on you! Great save!

Permalink Reply by Dennis Brown on February 12, 2009 at 10:11am
A job very well done we need more like them out there Thank you Mr.Tree & Ms.wood

Permalink Reply by CHRIS PUYLARA on February 12, 2009 at 11:35am
JUST AN AWSOME JOB TO THE GUYS DOWN UNDER-----ONE HELLUVA MESS YOU GUYS HAD THERE----TO THE GUY WHO SAVED THE KOALA-----YOU ARE TRULY A SOFT SOUL ----I SAW THIS ON THE NEWS- AND IT PUT A LUMP IN MY THROAT---YOU ARE TRULY A DEDICATED INDIVIDUAL TO THE SERVICE. AND LASTLY--EVERYONE AROUND THE WORLD----PLEASE HAVE A SAFE AND REWARDING DAY----CHRIS

Permalink Reply by Bob Allard on February 12, 2009 at 2:58pm
There is a firefighter that deserves an award, not just thinking of himself in the very hard times when he was looking for hot spots, sure wish there were more like him.

Permalink Reply by Oldman on February 12, 2009 at 3:56pm
This even got an AWWW from this crotchety old man.

Permalink Reply by John on February 12, 2009 at 4:30pm
Kudos for our Aussie Brother a feel good story for such a tradgedy down under.

Permalink Reply by Tony P on February 13, 2009 at 12:45am
"Feel good' stories on the news usually turn my stomach. This video and story are magic :)

Permalink Reply by lutan1 on February 13, 2009 at 12:52am
He was on the radio yesterday being interveiwed and he made it very clear that he's sick of the attention he's getting.

He said he did what he had to and now wants to move on and has asked everyone to let him be.

Permalink Reply by Chris Bouissey on February 13, 2009 at 9:32am
Good job to the guys down under...what a mess. hopefully justice will prevail.