Dunn's Chevy Silverado truck left the road and struck two trees, state police said. He was pronounced dead on the scene. Reports indicate it was an off-duty death. 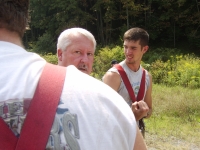 Virginia State Police said the accident occurred in the rural Southwestern Virginia community at about 2:15 a.m. Dunn, 21, was the lone occupant of the vehicle, which crashed on Route 615 eastbound near Route 646 in Bland.

Dunn listed his day job as a Sheet Metal Fabricator.

"Justin Dunn was a great firefighter and rescue squad worker," a local firefighter and FFN member wrote relaying news of the accident. "He was always ready to respond at a moments notice. Please pray for his family and our fire departments."

FirefighterNation.com will post more details as they become available.

Permalink Reply by jonathan on February 24, 2009 at 1:25pm
rest in peace brother an GOD bless the family an friends he leaves behind. larue county fire dept

Permalink Reply by Larry Taggart on February 24, 2009 at 3:56pm
The prayers of myself and my family go out the the Dunn family, and the members of the Bland County Volunteer Fire Department.

Permalink Reply by Chad Furr on April 7, 2009 at 10:32pm
My thoughts and prayers are with not only his family but his FF family also.

Permalink Reply by Padre Pete on April 9, 2009 at 9:25pm
A painful tragedy for family, friends and community. From this distance, prayer is as close as I can get and is what I have to offer.
Almighty and ever Loving God, Creator of Life on both sides of death, we ask your blessing on our Brother your servant Justin. Lord, he was a fireman who has answered his last alarm. Following Christ's own example, he put himself in harms way for friends and strangers alike. We pray that you found favor in his work and in his life and that he has come to know the fulfillment of your promise of life eternal. And we pray that all who suffer this terrible untimely loss may seek comfort in your grace and be rewarded.
We pray too, as our tasks may indeed take us through the valley of the shadow of death, that you stay our ever present source of strength and courage and you keep us ever mindful that we never go in or come out without you.
All this we ask in Christ’s name. Amen

Permalink Reply by Eric on April 10, 2009 at 10:29am
Terribly sad. My thoughts, prayers and condolences are with Justin's friends, family and departments. May Justin rest in peace.

Permalink Reply by Deanna on April 10, 2009 at 4:13pm
Thoughts and prayers to the family and the FF that he served with, Rest in Peace.

Permalink Reply by Michael Simpson on April 10, 2009 at 4:46pm
an extra prayer goes out to yall during your loss

Permalink Reply by Greg Gilman on April 14, 2009 at 9:58pm
i want to send my deepest condolences to justins family and department for there loss r.i.p. to justin and all our fallen brothers