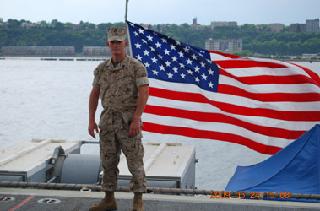 Marine Sergeant Christopher Hrbek aboard the Iwo Jima on Memorial Day 2009 as it sailed into New York on the Iwo Jima. (FDNY photo) 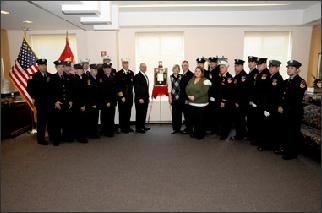 
“We are here today to honor a young man whose devotion to duty was truly extraordinary. Marine Sergeant Christopher Hrbek always dreamed of being a firefighter, but was called to serve his nation before he could serve this city. He went above and beyond in answering that call,” said Commissioner Cassano. “It is rare to see that level of devotion in anyone, never mind someone so young, who had already sacrificed so much.”

Marine Sergeant Hrbek was called to start training to become a member of the FDNY on two occasions, but twice deferred to continue active duty in the United States Marine Corps; serving four tours of duty in all. On January 14, 2010, at the age of 25, Marine Sergeant Hrbek was fatally injured during an explosion in the Helmand Province of Afghanistan, where he was serving as part of Operation Enduring Freedom. He received the Purple Heart for his actions that day.

Commissioner Cassano was joined at the ceremony by Marine Sergeant Hrbek’s friends and family, including his step-brothers, Firefighter James Hodges of Rescue 1 and Firefighter Beau Hodges of Engine 59, as well as members from both companies.

At the ceremony’s conclusion, a plaque was presented to Marine Sergeant Hrbek’s mother and stepfather, Cheryl and Jaymee Hodges. At the top of the plaque are the FDNY and Marine Corps logos, as well as the American flag. At the bottom is his Honorary Firefighter Badge. The plaque reads, “The FDNY will always remember Christopher Hrbek and all the U.S. Marines who died in service to our Country. Christopher is a true fallen hero. The Members of FDNY are proud and honored to call him “Brother.”

“Chris wanted to join the real fire department when he was done with his service to his country and now he is a member, along with his two brothers,” said Jaymee Hodges, Marine Sergeant Hrbek’s stepfather. This is something he had always wanted.”

Permalink Reply by Robert St. Germain on March 4, 2010 at 3:31pm
God Bless him and his family. My prayers are with all who were involved with this tragedy.

Permalink Reply by John Rulli Jr. on March 4, 2010 at 11:23pm
The FDNY is the greatest fire dept in the world and this is one of a million things that makes them the best! God bless!!! RIP brother

Permalink Reply by J.R. Fitzgerald on March 5, 2010 at 12:42pm
I am truely greatfull for the service and sacrifice that Sergent Hrbek gave to keep this country free. And knowing that a person of that caliber and commitment became a brother FF makes me even more proud to call myself a FF. My prayers are with him and his family. R.I.P. Brother.