MADISON, Wis. - The high-stakes fight in Wisconsin over union rights is about more than pay and benefits in the public sector. It could have far-reaching effects on electoral politics in this and other states by helping solidify Republican power for years, experts said Monday. 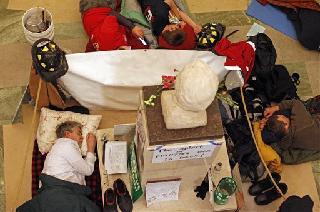 While Republican Gov. Scott Walker's plan to wipe out collective bargaining rights for most public employees has galvanized Democrats and union members in opposition, the GOP could benefit long-term by crippling a key source of campaign funding and volunteers for Democrats.

"It would be a huge landscape-altering type of action, and it would tilt the scales significantly in favor of the Republicans," said Mike McCabe, director of the Wisconsin Democracy Campaign, which has long tracked union involvement in Wisconsin elections. "This is a national push, and it's being simultaneously pushed in a number of states. I think Wisconsin is moving the fastest and most aggressively so far."

The National Education Association, which represents 3.2 million workers, said teachers' collective bargaining rights are also being targeted by proposals in Ohio, Idaho, Indiana and other states.

Iowa Gov. Terry Branstad, a Republican, said Monday lawmakers should pass a proposal to bar public employees from negotiating health insurance benefits. In Indiana, a GOP-led House committee debated Monday a right-to-work bill that would prohibit union membership from being a condition of employment.

The Wisconsin plan strikes at a key Democratic Party constituency by eliminating the mandatory union dues teachers and other public workers are required to pay. The plan would take away the ability of most municipal and state employees to bargain any condition of employment beyond their base salaries - including benefits, work schedules and overtime pay. And unions would need to survive a vote of their members every year to stay in existence.

Public safety workers, including police officers, firefighters and state troopers, would keep their rights under the plan. Those unions endorsed Walker in his campaign for governor last year, but he said they were exempted because he did not want to jeopardize public safety if they walked off the job.

"It's stunning partisan calculation on the governor's part, and really ugly," she said.

Walker has denied political motivations, saying his proposal is about cutting state and local spending for years to come. But in an interview with The Associated Press last week as protests raged inside the Capitol, he acknowledged his plan to allow workers to opt out of paying their dues could cripple unions.

"That's something that threatens these national leaders. They want that money. That's their existence. Having mandatory membership is what keeps them going," he said. "If people have a choice, I think many of them are afraid that things will change, and that's where the intensity is. But for us, it's about balancing the budget and doing it in the most responsible way possible."

Standing to lose the most clout is the powerful Wisconsin Education Association Council, which represents 98,000 teachers, counselors and other current and retired school workers. Mandatory dues for its members can be $1,000 or more per year.

Walker has suggested workers could save their dues and use that to help pay more for their health insurance and retirement benefits. His plan would essentially cut take home pay for many public workers by 8 percent by increasing their contributions for those benefits, concessions that union leaders say they are willing to accept if Walker backs off his anti-union rights plan.

Crowded among a throng of protesters on the Capitol steps on Monday, Madison elementary school teacher Barbara Rowe said she gladly pays her $95 monthly dues to her union. She said her pay would be cut by far more than that under Walker's plan and she was willing to accept that to help balance the budget. But she denounced his proposal to eliminate collective bargaining "as a total power grab."

"This is all about union busting," she said.

WEAC is typically among the largest-spending special interests in Wisconsin politics, helping former Democratic Gov. Jim Doyle win two terms in office and often trying to sway key legislative races with television ads and mailers. It also contributes to other groups that run political ads in favor of Democrats and against Republicans.

WEAC's political arm has spent more than $11 million in donations to campaigns and spending to support and oppose other candidates since 1998, nearly all of it helping Democrats, according to McCabe. The group endorsed Milwaukee Mayor Tom Barrett, a Democrat, in his race against Walker for governor last year.

McCabe said WEAC's campaign spending dwarfs that by other unions _ including American Federation of State, County and Municipal Employees, which represents tens of thousands of state and local workers in Wisconsin. But he said they were all a key part of the Democratic party's coalition in a state that has generally leaned to the left.

Arguably more important than their spending is union-organized volunteer work manning phone banks to help Democrats, going door-to-door to get voters out and mobilizing their members to vote, he said.

"It adds up to something that would fundamentally shift the nature of partisan politics in Wisconsin for a decade, whether or not they intended to or not," he said. "The stakes are very high. Everyone is viewing this as a test case for the nation."

Permalink Reply by John Crabbe on February 23, 2011 at 12:54am
I will be down in Madison on Wednesday

Permalink Reply by Vic Silverfish on February 23, 2011 at 6:53am
They recognise this is part of a larger strategy to further wreck labour's ability to organise. Solidarity boys!

First they came for the communists,
and I didn't speak out because I wasn't a communist.

Then they came for the Jews,
and I didn't speak out because I wasn't a Jew.

Then they came for me
and there was no one left to speak out for me.