Tough on Tattoos: Like it or not, body modifications can reduce your chances of getting hired

Tough on Tattoos: Like it or not, body modifications can reduce your chances of getting hired
By Scott Cook

This month I’m going to talk about body modification: tattoos and piercings.

Now I know some of us believe that body modifications are really a personal choice, and they’re often done as a remembrance or celebration of someone important in our lives—and that’s all well and good. Tattoos and piercings are your business. You like them? Don’t like them? I don’t care; it makes no difference to me one way or the other. This is America, and you have the right to do anything you want with your body.

What gets me is that some firefighters with outlandish ink visible even with clothes on, or gauges in their ears as big around as toilet paper rolls, think that since they have the right to do that to themselves, others have ZERO right to think negatively of them for doing it. Big mistake. 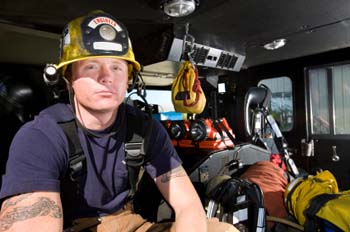 What image do your body modifications present? Photo iStock.com

As I said, I couldn’t give a rip one way or the other. But your current or future employer will, and that’s a fact. When you’re in the City of Gadzook’s uniform, you represent that city, not yourself, as you would prefer to believe. I know a lot of firefighters who think, “It shouldn’t matter that I’ve marked myself for all to see. What matters is whether I can do the job proficiently and safely.”

To an extent, that’s very true. But when you walk up to Mrs. Jones, who’s having the worst day of her life, the last thing you want to do is make her feel uncomfortable. And before you say a word, or she sees that big shiny fire department badge on your uniform, she sees the tattooed arm, neck or face. Is that going to instill confidence in Mrs. Jones?

And let’s not forget about your prospective employer. Let’s say they have the choice between two prime candidates with equal skills and abilities to represent the city. One of the two doesn’t have any body modifications, while the other has a large, “visible while in uniform” tattoo. Who do you think gets hired?
Maybe it shouldn’t matter. But it does.

I’ll relate a true story from outside the fire service. A very nice young lady applied for a job. She’s smart and quite capable. She’s been hanging around the worksite as a student for several months. One day she wears a shirt that’s not tucked in. The folks that she’ll be working with see the ink on her back. Instantly, their opinion of her changes—not about her abilities as a worker, because they know she’s a good worker. But they begin to have doubts about her character, and how she will represent the company when she’s outside the workplace. In the end, she doesn’t get the job.

It shouldn’t matter … but it does.

Scott Cook is the former chief of the Granbury (Texas) Volunteer Fire Department and a fire service instructor. He’s also a member of FireRescue’s editorial board.

Comment by Raymond Clarke on July 31, 2010 at 12:07pm
"With regards to firefighters wearing mascara, eyeliner and lipstick...I would have to throw that one over to the attorney. It has never come up at our locale, but I wouldn't rule it out."

I'll have to remember this one Art.

I must agree with the general populus here. Keep them covered while on the job. If that means you have to wear long sleeves on a 100 degree day, so be it, it was your choice to mark/pierce your body.

Comment by Angela M. Burkhart on January 4, 2010 at 1:26pm
I think that most tattoos that people have aren't offense to most people, the same goes with basic piercings as well as make up that the women(I would assume, LOL)departments wear. The problem that arises is more that where and what do you draw the line at? It is only the size of a visible tat or the meaning or actual picture shown? Is it how many there are or if there are any at all? The same would apply to piercings.

Legally with company by-laws and regulations it is simpler to just not allow any of them to be visible when wearing a work uniform or have them covered by bandages or the like. That way it is less to do with freedom of expression and more of an equal playing field. This is more to do with public perseption and whether or not they feel comfortable about our professionalism and abilities. Should that have anything to do with it? Of course not, it has nothing to do with how we are able to do with we have to do. However we have to remember that as firefighters we are in a whole different spot light with the public and need to respect that even if we disagree.

I have two tats myself, one on the shoulder that when wearing a short sleeve shirt isn't visible and one bracelette on my wrist that I can cover with my watch if I so choose. I love them but would understand if an employer would prefer them unseen.

Piercings are another matter strickly because of safety issues, now simple stud earrings are one thing, although still could cause a problem. Rods, dangles, hoops etc are different. Many individuals don't wear their wedding rings for the same reason. They can get caught on things and doing mimimal to great physical harm.

Comment by Malcum Salyers Jr. on January 4, 2010 at 10:26am
I agree that tatoos and piercings are a personel choice. I have one that was designed and bought for me by my son. It was a birthday present and looks very nice and has both meanind and thought to it as well as tells a story about me.He said he wanted to get it for me in order to show his appreciation and respect he has for what I do and have done. I agreed to the tatoo but it was with one stipulation. It could not be seen when I wore a short sleeve shirt. Gota admit he did do a great job on what he wanted to express and gave it a personel touch. Ive had it now for about 4 yrs and a lot of people still dont realize its there. Remember their is a time and place for everything and at work or a job interview is not the place to show off a piercing or a tatoo and most definately as an officer not to your crew members or a patient.

Comment by Jack/dt on January 3, 2010 at 4:16pm
Mallory,
Keep your personal comments to yourself, they add nothing to this discussion.
As for my comments, apparently you are unable to distinguish analogous examples from smartass-ness.

Simply because you are in favor of tattoos doesn't put you in the apex position to pass judgment. And as for my examples, so what if someone doesn't want to wear deodorant? It's a societal convention that people have become used to. So long as they are showered everyday what is it to anyone else, in some respects it's no more obnoxious than someone lathered in perfume or cologne.

I was trying to make a point that what one person sees as a personal liberty or expression another may not. That you see tattoos as a means of expression is great, I'm simply playing devil's advocate. The very fact that you seem so disgruntled about my comment(s) would lead me to believe that you are one of those people who think everyone around them has to just shut up and deal with whatever you want to hand out. Not a very desirable quality either. Do I get it? Nope, have to be a fool to want to tat yourself up but hey, have at it, not going to affect my life one bit. Do you get it now?
(seems that you yourself think tats=hooliganism, I never implied as much. Check your mirror.)

Comment by Mallory Turner on January 3, 2010 at 3:58pm
Way to be a smart ass about the whole thing. All those things make you look unprofessional and although they don't change your work ethic it makes YOU undesirable to work with and be around. As long as the tattoos are covered up until your off work shouldn't be an issue. I know quite a few firefighters with full sleeves (older guys, I might add) and they are two of the hardest workers at the station. Another tattooed "hooligan" from my academy was the top ten in class through graduation. Do you get it now?

Comment by Art "ChiefReason" Goodrich on January 3, 2010 at 3:51pm
Jack;
Yes; I see your point, smell your point and if it wasn't for reasonable people, where would we be?
You bring back some not so fond memories of my ambulance days. Some of the sights and smells...man, oh man. Let's put it this way; when the smell is so strong that it leaves a taste in your mouth, that's strong.
Art

Comment by Jack/dt on January 3, 2010 at 3:12pm
But...you do see the point I'm trying to make, right? One person's right to stink like hell ends at the tip of another's nose, FF or civilian. Guess the same argument holds true for tats and eyes.

Comment by Art "ChiefReason" Goodrich on January 3, 2010 at 2:38pm
Of course, you dodged the other issues I mentioned. B.O. isn't an issue with OSHA or NFPA.
Hey; if you can dodge a wrench, you can dodge a ...nevermind.
I can't tell you how many times in this past year our human resources guy had to go to an employee and tell them that we were getting complaints of body odor. If it is stated in the handbook that proper grooming is required, then you can certainly take appropriate action. On the flip side, we also got complaints of too much perfume or cologne. I guess that there is a fine line on foo foo, but stink is stink and you cannot show up for work in an overly funkadelic state.
Let's see what else did I dodge?
Oh yeah; clothes cannot be baggy, torn, tattered or look like they were grabbed out of the hamper. Dress code requirements are allowed and should be enforced. That way; lawyers stay out of it, if it has been done uniformly.
With regards to firefighters wearing mascara, eyeliner and lipstick...I would have to throw that one over to the attorney. It has never come up at our locale, but I wouldn't rule it out.
Mopar, mon fraire'?

Comment by Jack/dt on January 3, 2010 at 2:10pm
Art,
Yeah I realize that but come one, that scruffy look is like, wow man, like my form of like self-expression.
Of course, you dodged the other issues I mentioned. B.O. isn't an issue with OSHA or NFPA.