Is It Safe Above? Tips for assessing roof conditions & initiating ventilation at commercial fires
By Michael M. Dugan

Fires at commercial occupancies are one of the most difficult operations firefighters and officers encounter. These fires are resource intensive and dangerous, and our record of performance at such fires is hardly perfect. Roof ventilation during a fire in a commercial structure is a key tactic for improving the incident outcome, but that ventilation must be coordinated and controlled, and conducted only when it’s safe for the team to be operating on the roof.

Assessing the Roof
Commercial roofs are very dangerous; some fires warrant setting up a defensive operation rather than risking members’ safety by initiating a roof ventilation. The building construction and fire conditions will most likely be the determining factors in this decision.

When considering the type of construction, ask yourself: Does the roof have a metal deck, wood, concrete or gypsum? What is the support structure and how long has it been exposed to fire? For example, if a metal roof deck has enough fire under it to warrant cutting the roof, then the building is already in the process of deteriorating. Another example: If fire exposes a gypsum roof deck support system, it will not show at the roof through the gypsum deck. 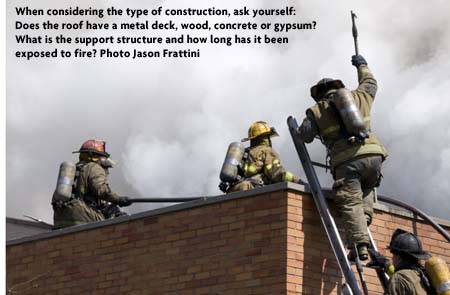 The best time to determine building construction is during a familiarization drill on a nice, sunny day and not at night during a fire. That’s why preplanning structures in your response area is so important. Tip: If you’re unsure about the construction type or if you believe the building might have been recently renovated, treat it as a lightweight-constructed building.

When considering the fire conditions, ask yourself: What is the current intensity of the fire and how will the fuel load within the building—and the building itself—affect the fire’s progression? The fire should be visible from the street, but if not, the incident commander (IC) must rely on reports from interior companies. If in doubt, make the decision to remove members from the building and roof; it’s time to go defensive.

A rule of thumb: If the building is of newer, lightweight material, and the fire conditions are moderate, roof operations are generally safe. Specifically, a moderate fire is one that’s confined to the contents of the building and not impinging on or affecting structural members of the building. Members can operate on the roof to vent natural opening, but the roof still should not be cut due to the nature of lightweight components.

If the fire conditions are heavy to severe, then the risk is not worth the reward. Specifically, a heavy fire would be one that’s attacking and weakening structural components of the building and affecting their ability to support the roof. If the fire is impinging on the ceiling of the building and the roof support, this would indicate a dangerous condition.

The Right Tool for the Job
Members assigned to the roof must be equipped with certain tools to operate safely. The most important tool for any firefighter to bring with them: their brain. Look, listen and feel as you begin your operations. If something doesn’t look, sound or feel right, stop and communicate that to the IC. Your piece of information might be the one thing that the IC needs to know before deciding to give up on the building. If they don’t get the information from the roof team, they might not make that call.

Other tools every roof firefighter will need: a flashlight and a radio. One member of the team should also bring a hook or pike pole and a Halligan tool and the other member an axe or Halligan and a saw.

Getting On
Getting to the roof on most one- or two-story buildings generally requires only a portable ladder. The aerial ladder should be positioned away from the front of the building, leaving room for a tower ladder or unit with a master stream in front of the building in case the need arises.

If the building is a store in a row of similar types of stores, the portable ladder will allow members and the command staff in the street to see whether that building has a fire wall at that location (if the department follows that standard operational guideline). If the ladders are placed at the location of the fire walls, and smoke and fire are observed on the other side of that way, it indicates to the IC that fire has extended beyond the fire walls.

Once you place the portable ladder, place another ladder on the other side of the building near the opposite fire wall, if present. This allows the team on the roof to have a means of escape remote from the primary access point; it also highlights the opposite fire wall. Portable ladders are the quickest way off the roof during an ordered evacuation.

Moving on a large commercial roof requires caution. One member of the team should use the hook to probe in front of the team to determine if the roof is structurally sound. If the head of the hook penetrates the roof, or the roof feels springy, evacuate the roof. Note: Always try to leave the roof from the way you came, because you know that route is safe.

If the roof decking is intact, locate a natural vent in the roof, such as scuttle, skylight or vents. This will allow ventilation without having to cut the roof. This venting might suffice for the interior forces to find the fire and extinguish it.

Once the initial ventilation has been accomplished, determine whether additional ventilation is required and possible due to the type of construction used and concerns about the support system.

The roof team must have a plan before cutting the roof that includes the wind conditions, the size of the cut and access to an escape route. Try to cut with the wind at your back. Always back up the saw operator to avoid tripping or falling over hazards on the roof while operating a running saw.

Note: If the cut puts the roof team on the opposite side of their egress from the roof, identify an additional escape point before commencing with the cut.

Special Dangers
Beware of cutting steel deck roofing. If a steel deck roof needs to be cut, the support system is most likely already compromised. A steel roof will also have an uncertain system of attachment when it comes to the sheets of steel. The metal decking will not always be supported at the seams, so if you cut it, you might be standing on an unsupported section of roof.

Another roof system that can be extremely dangerous: gypsum roof deck. Gypsum roofing will stop the fire from going through the roof, but members operating on the roof will be unaware of the conditions of the support system below them because the gypsum delays recognition of conditions. Therefore, if you start a cut and a white powder appears around the saw, this indicates a gypsum roof deck. You should evacuate the roof and notify the IC.

Gypsum is impacted by moisture and to place gypsum on the roof, which can be affected the most by moisture, makes no sense from a fire service point of view. Gypsum is weakened and disintegrates when exposed to moisture, so when it’s placed on the roof, the wettest place on the building, it can be a problem even before the fire. If a member steps on a weakened roof, they might fall through it. If the roof has been affected by moisture, you’ll see a mud- or clay-like substance around the saw and its shroud.

Similar to steel, gypsum doesn’t have to rest on support beams, so if you cut it, you may be left standing on an unsupported section of roof. Members can cut and work on a roof of ordinary construction with ease. A wooden deck roof can and should be cut as soon as initial ventilation is accomplished, if necessary.

When cutting a wood roof with a saw, start with an expandable-type coffin cut approximately 3 feet by 3 feet. If more ventilation is necessary, expand the hold to 3 feet by 6 feet (see diagram). Remember to push down the ceiling to vent the occupancy for the members operating in the store.

It’s safer to make one expandable hole in the roof than many smaller holes due to safety concerns for the roof team. However, avoid making a cut in a roof that’s too large to be pulled. If the saw operator cuts an 8-x-8 foot section but members on the roof cannot pull the section due to its size, then no practical ventilation has taken place.

A Final Note on Safety
Operating on the roof can be difficult, and safety should be your primary concern. Once on the roof, find a second way off. In an emergency evacuation, go the safest way off the roof, not the quickest. If while operating on the roof you’re blinded by smoke, drop to your hands and knees and wait for the wind to change. If conditions don’t improve, crawl back the way you came toward your escape route.

Members operating on the roof are the eyes of the IC. If the roof contains hazards not visible from the street, such as large air conditioner units or refrigeration units, notify the IC immediately.

Roof teams should have extensive firefighting experience and be confident when making decisions. They should be empowered with the ability to evacuate the roof and give it up if conditions warrant it. Roof personnel must understand that they can make a huge difference in the operation and safety of all operating forces—positive or negative.

Michael M. Dugan is a 33-year veteran of the fire service and a 23-year veteran of the New York City Fire Department (FDNY), currently serving as captain of Ladder Company 123 in Brooklyn. As a firefighter in Ladder Company 43, Dugan received the James Gordon Bennett medal in 1992 and the Harry M. Archer Medal in 1993, the FDNY’s highest award for bravery. He was an instructor at the inception of the FDNY’s Annual Education Day and has developed programs currently taught to all FDNY members during the annual event. Dugan is a member of the IAFC Safety, Health & Survival Section. He serves as a HOT instructor at Firehouse Expo and FDIC, and is a regular contributor to fire service magazines. He also lectures at various events around the country on topics dealing with truck company operations, building construction, scene size-up and today’s fire service. Contact Captain Dugan at duganfire@aol.com or visit his Web site, www.NYfiretraining.com.

Comment by Ben Waller on October 5, 2009 at 10:51pm
On modern Type II construction, a moderate fire can turn into a huge fire very quickly. The timeline from the Charleston Super Sofa Store fire is an example.