Who says getting old is bad? Getting old means growing wiser and perhaps more dignified and even commanding more respect, right? I’d like to think this is just as true for fire stations as people. The members train hard to learn everything they can about their craft and then pass along this knowledge to the new recruits. And as a station grows older, our respect for the station—and what it symbolizes to the community—grows exponentially.

In the April issue of FireRescue, we published Jane Jerrard’s article “End of an Era” about the closure of the oldest continually operated firehouse in the country—Louisville (Ky.) Fire Department Station #7—which has reportedly been putting out fires since 1871.

Many members of the community were saddened by the closure of this landmark and even took their arguments before a circuit court in an attempt to keep the station operational. However, the city ultimately won the battle to close the station, which would, according to Louisville’s mayor, help offset the city’s ballooning budget deficit.

Blame the economy for everything!

The “End of an Era” article has generated quite a discussion. We’ve received letters from readers purporting that their department possesses the oldest firehouse—or at least a really old firehouse that warrants some recognition. And I couldn’t agree more—at least about the recognition part.

Mike in Ohio writes, “The City of Shelby, Ohio, may be the next ‘old house’ in line. Our department has been the only home of Shelby Fire since 1872. We operate out of one station. Last year, the station was flooded with 52 inches of water from the river that’s literally next door. Several attempts have been made to pass a levy for a new station. Each time it has failed. We even have an article in our possession—written in the early 1900s—that states ‘If we don’t build a new fire hall, it will be there for a hundred years.’”

Maybe that article was written by the Nostradamus of Shelby, Ohio—or at least someone who had an inkling that funding issues were only going to get worse over time.

To Mike, thank you for writing us. While I hope you get everything you need to build a new station, you realize that leaves vulnerable your position as the “second-longest-running station.” But I suppose that’s not as important as having to work (and therefore live) in a structure that old.

This brings me to the next letter I’d like to address. Chip in Maryland writes that “The United Steam Engine Fire Engine Company No. 3 in Frederick, Maryland, was built in 1845 and is still in use today. Though the building has been renovated and additional engine bays were constructed in the late 1960s, the original building is still in operation today.”

1845! If Chip’s claim is true, then Maryland trumps Kentucky—by 26 years. That’s quite a feat. Chip adds, “We congratulate the Louisville Fire Department for the service to the community, but want to be sure to note that at least one other firehouse, built prior to the Civil War, is still in use today.”

Chip, thank you for writing to us as well. We’ll certainly try our best to verify the assertion. My first thought, prior to extensive research, is perhaps the discrepancy lies in the phrase “continually operated station,” which describes the Louisville Station #7. Is it possible that the United Steam Engine Fire Engine Company in Frederick, Md., temporarily closed its doors at some point in its long history, thereby taking it out of the race for oldest continually operated station? I wouldn’t be surprised. But then again, I haven’t done my homework yet.

Regardless of which station really is the oldest continually operated firehouse in the country, both communities deserve kudos. I can only imagine how honorable it feels to be a part of such history. 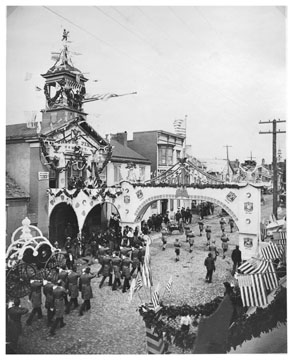 And so not to rob the readers of a little history, here’s some more of Chip’s letter about the Frederick station: “Built in a swampy area, the building was dubbed the ‘Swamp Hall’ by the town folk, and the firefighters were nicknamed ‘Swampers.’ This year marks the 150th anniversary of John Brown’s Raid on Harper’s Ferry. The United Guard, a militia organized and manned by the members of the Uniteds, were reported to be the first military regiment on the scene to help quell the insurrection. The other two Frederick fire company militia units, the Independent Hose Company ‘Rifles’ and the Junior Fire Company ‘Defenders,’ were also summoned to Harper’s Ferry.”

The picture at right shows the United firehouse decorated for the 1876 centennial celebration parade—an amazing image. Thank you again, Chip.

And just to be clear, this discussion is not meant to take anything away from the closure of the Louisville station. Regardless of whether that station has been operating the longest, they should be proud of being part of such a rich fire-service history. I’m happy to hear that community members fought to keep the station open. It shows a respect for their local fire department that every community should share.

I’m curious: What’s the oldest station in your community? Are there historically significant fire-service sights in your first-due?

As always, thanks to everyone for reading FireRescue and writing to us. We always value your feedback. 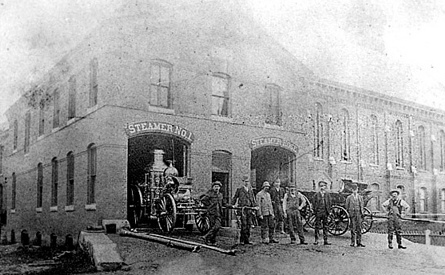 I work in the City of Keene, New Hampshire. The Central Fire Station was built and completed in 1885. It still remains operational at this time. The current expanded floor plan configuration was completed in 1892.