The World Burn Congress Brings Rescuers and Survivors Together 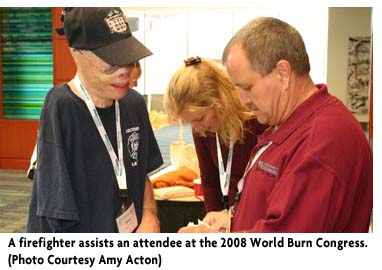 After saving a burn patient from immediate death, you may have wondered late at night if you really did that person a favor. Maybe a quick death would have been better than the long and painful treatment for extensive, serious burns. And then there are years of continuing treatment, surgeries and skin grafts. If the burns are on visible parts of the body, especially the face, there will psychological trauma to deal with in addition to the obvious physical trauma.

The World Burn Congress (WBC), held Aug. 26-29 in New York City and sponsored annually by the Phoenix Society for Burn Survivors, provides first responders with the opportunity to meet, interact and bond with burn survivors.

Amy Acton, the Phoenix Society's executive director, says the WBC provides closure for first responders who might have wondered if they'd done the right thing by saving a burn patient. "When they see someone with burns over 80% of their body go on to marry, have a child and a job, they realize 'It's OK that people survive. We're doing good work.'"

She says the opportunity for first responders to interact with burn survivors provides the closure that's missing from most first responder/patient encounters. Even if the first responders don't meet the actual patients they saved, meeting others like them demonstrates that patients can go on to live meaningful lives if they have adequate resources for their recovery.

Phoenix Society President Ron Siarnicki says his interest in firefighter injuries coupled with his family's experience after his nephew was burned led to his involvement with the group. He met Acton at an American Burn Association event. "The rest is history," says the retired Prince George's County (Md.) Fire/EMS Department chief and executive director of the National Fallen Firefighters Foundation.

Attending WBC is a "truly emotional, inspirational experience," says Siarnicki. "It is humbling to see the strength and drive of burn survivors as they work to rebuild their lives and reintegrate into society after a devastating incident."

Phil Tammaro, firefighter/EMT with Billerica (Mass.) Fire Department and a certified fire and life safety educator, is a burn survivor. He was burned over 35% of his body when he was two years old. Even though Tammaro is an example of a fulfilling life as a burn survivor, he says attending the WBC "puts a whole other perspective on what we do. It is amazing to see such positive people."

Billy Leahy, a FDNY firefighter and president of the New York Firefighters Burn Center Foundation, says hearing the burn survivors' stories is a continuation of the first responders' stories. "We see people at their worst and then never see them again." But spending time with burn survivors at the World Burn Congress reinforces what first responders do. "It is an eye-opening experience to see what people can overcome," he says.

"There has always been a lot of interest in the acute care of burns; now there is more awareness of what happens down the road," Leahy says. The WBC is an important part of that new awareness. It offers first responders a chance to learn about the latest developments in burn prevention and treatment. It offers resources to burn survivors, their families and first responders on coping with loss and adapting to a new life. This past year's sessions included vocational planning, creative cosmetics, two half-day workshops on fire protection and lots of time to share stories.

One of the speakers at this year's WBC, which is Aug. 26-29 in in New York City, will be Kim Phuc Phan Thi, a Vietnamese woman who was burned as a girl by napalm in an iconic, Pulitzer Prize-winning photo from the Vietnam War era. Another speaker is Kimberley Dozier, a CBS correspondent whose injuries from a 2006 roadside bomb in Baghdad included burns from her hips to her ankles.

Attending the WBC was a very rewarding experience for Joe Burris, a retired fire and rescue training specialist from the North Carolina State Office of Fire Marshal and assistant chief of Eastern Pines Fire Rescue in Greenville, N.C. "It puts life into perspective," he says, adding that he has been struck by such comments from burn survivors as, "It's the greatest thing that ever happened to me," and "It changed my life and saved my life."

In addition to offering closure to first responders by showing them positive examples of burn survivors, Phoenix Society strives to prevent burn injuries. They do this through public education and providing support for codes that call for increased sprinkler installation and other ordinances for fire and life safety. Siarnicki calls on the EMS and fire service community to offer more support to the Phoenix Society.

Learn more about the Phoenix Society and the World Burn Congress.

Ann Marie Lindstrom is a freelance writer and contributing editor to JEMS, the sister publication of FireRescue magazine.