Hermine Hits
The long shift began on Sept. 7 at 2045 HRS when the first call came in to the Bell County Communications Center. The call came from the west side of town where rising waters had trapped a family in their home. In the low-lying terrain, a small, unnamed creek was collecting water from the intense downpour and swelling into the streets and houses. Within a few minutes, other calls started pouring in—some from people just down the street from the first call. People were trying to flee their homes, but were now stranded in their cars by rapidly rising water. 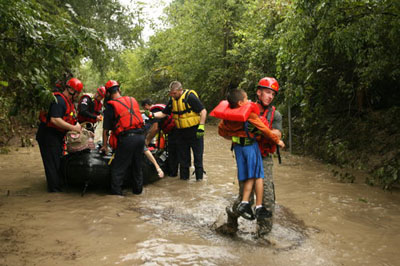 
First on scene were Engine 7, which had a swiftwater technician on board, and Rescue 2, a heavy-rescue truck that also had a couple swiftwater techs aboard. It was now becoming evident to rescuers that they were about to be hit hard, so the department paged all 30 members of the Killeen Technical Rescue Team. In addition, the police and road departments were called to assist.

Rescuers removed people from their flooded residences and cars, and used the department’s converted school bus to transport them to a local community center.

Elderly in Need
Rescuers were wrapping at this scene and were en route to quarters when they started getting calls from all over town. The first of these calls was to Little Avenue, where some elderly people were trapped in their residences.

Rescuers launched their rescue boat, a tiller-steered Zodiac FC 420 with a Yamaha 40-hp engine, to navigate the class 2 current—moving water with some obstructions that were easily avoided by a skilled driver. They used the boat to evacuate about a half dozen elderly people and three dogs, and they escorted some other people out by foot. The team then helped the rescued people onto the community center-bound bus.

Housing Development Evacuation
As rescuers were wrapping up here, a call came in from the east side of town. The Killeen Fire Department dispatched a booster truck staffed by off-duty personnel. Rescuers arrived at a U-shaped street where they found a housing development of duplexes making up approximately 70 residences.

At the same time, dispatch notified responders of an EMS call at the same housing development. A man in his mid-30s who lived in a residence that had flooded was unconscious and having rapid respirations. The boat crew took him and his wife to an ambulance.

The crew finished rescuing those people who were in immediate danger and then doubled back over the area, looking for anyone who was not in immediate danger but might be if the water continued to rise. They then went back to the central fire station. It was 0400 HRS on Sept. 8, and the once-relentless rain was now easing up.

Man in a Tree
As units returned to their respective stations and were just beginning to rest, a call came in from Harker Heights, a city just east of Killeen. The Harker Heights Fire Department was requesting a rescue boat and crew. A group of rail workers who had been checking for damage on the rail line reported hearing voices from an area of trees running parallel to the rail line and adjacent to Nolan Creek.

The department dispatched its boat, which was towed by a pickup. When rescuers checked in with Harker Heights Command, they were told that there was one person stranded in a tree along Nolan Creek but their location was not certain yet. It was 0500 HRS, and it was still dark outside.

Having trained and worked together before, the two departments combined forces. Killeen left their vehicle and boat with Harker Heights Engine 2, and rescuers in PFDs walked along the creek, calling out about every 10 feet. After walking approximately 150 feet downstream, they heard a man’s voice calling for help. It sounded like he was on the other side of Nolan Creek, which was approximately 90 feet wide. Rescuers could not get a visual on him using flashlights or helmet lights, so they went back for the boat and launched it into the creek.

The creek was now about a class 3 current, carrying a very heavy debris load that included tree limbs, uprooted trees and various kinds of trash. The boat driver got into the current, then into an eddy, and firefighters again began calling out. They heard they man call for help. He was approximately 60 feet away. The driver headed back into the current in the direction of the calls for help, and the bowman spotted the man in a tree. The driver put the bow against the tree, and the man, who had been about 10 to 12 feet above water, began to carefully make his way down to the boat.

The man, who was covered in fire ants, said he had been in the tree for about 5 ½ hours. The firefighters gingerly brushed off the fire ants and gave turned him over to Harker Heights EMS.

Body Recovery
The Killeen crew got back to their central station at 0615 HRS. They washed off and decontaminated their boat and restocked. Then, at about 0645 HRS, a deputy chief arrived and said that he needed special ops crew for a body recovery. A woman had driven her car into a flooded road, and the car had been washed away. The engine company that responded during the night had reached the scene but could not see any sign of the car.

The special ops team went back to the area where the water had swept away the car. The water had since receded, so rescuers could now see the car. Wearing PFDs, the team floated over to the car, bringing with them a metal basket litter that was equipped to float. They broke the glass of the rear window, extricated the body, used webbing to secure it in the litter and pulled the litter to land. Rescuers cleared the scene at 0800 HRS.

Belton Needs Help
Rescuers arrived at the department’s maintenance facility at about 0800 HRS at which point dispatch called them to go to Belton, located about 17 miles east of Killeen on I-35. A class 4 current (an intense and powerful current with predictable rapids) from a local creek was moving through a neighborhood, flooding homes and businesses. Some homes were already logged with 6 to 7 feet of water, and people were stranded on their roofs.
The rescue team had worked all day and all night, but they were the most experienced, so after clearing with command, they were en route to Belton. Considering the reported class 4 current, they requested three additional swiftwater technicians.

Rescuers reached Belton around 0830 HRS. They ultimately assisted the other agencies on scene—Temple Fire and Rescue and the Fort Hood Fire Department—evacuating people from their houses. They then did a recon to confirm that no additional citizens were in danger.

Command then informed the Killeen crew that the another department’s boat had engine trouble and was now out of service. There were still 12 victims on the other side of the creek trapped in houses. The only way to reach the trapped people was to travel across the creek, which had a class 4 current carrying a heavy debris load, including fragments of a concrete bridge.

Rescuers had to first maneuver downstream and then back upstream to avoid the debris. With an engineman and bowman working the boat, they were able to remove four people at a time. Other firefighters scouted ahead, placed PFDs on people and instructed them about the rescue procedures.

It took about an hour to reach the 12 people. Belton and Fort Hood firefighters then transported victims to either the Red Cross or a church.

The Killeen crew put their boat on trailer, checked in with command and was released. They got back to Killeen at about 1500 HRS. Some of them had been working since 0700 HRS the previous day.

Sources: Justin Todd of the Killeen Fire Department Technical Rescue Team provided information for this report. Some additional details were taken from accounts of the incidents in The American Statesman.

“One thing we learned was that training on these types of incidents is very important. Training for the usual is not as important as training for the unusual events that might take place. Keeping up on skills, preplanning and training with your mutual-aid departments is paramount. This way, you’ll know each other’s capabilities and can also help each other with needed skills.

“Also, one of the most important lessons we learned was overall accountability. We had accountability on scene of our personnel, but knowing which apparatus were at which scene was difficult at times.

“And very important is the proper equipment for the situation. Our Zodiac FC 420 performed outstanding throughout the incidents. Also, our PPE, which was purchased for us by the city, is top of the line and kept everyone safe. With the proper equipment, we were able to perform the rescues safely and efficiently with no injuries to any rescued victims or rescue personnel.”