A May 3 response illustrates a typical climbing accident. At 1025 HRS, the Combined Communication Center in Spokane, Wash., received a 911 call from a rock climber reporting that his climbing partner had been injured in a fall and was trapped on a rock ledge in Spokane’s Shields Park.

The 19-year-old male patient had been practicing lead-climbing techniques on a 75' vertical rock wall, placing protection in the rock as he ascended, while his partner belayed him from below. When the lead climber’s protection unexpectedly failed, he fell approximately 25 feet, landing on a small ledge about 40 feet above the ground. 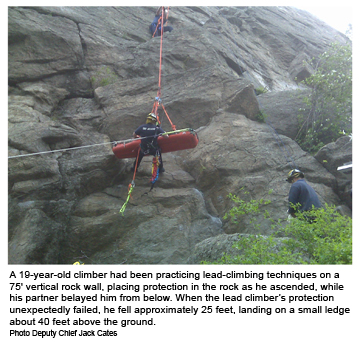 Engine 94 arrived at 1034 HRS with a crew of four, one of whom was a rescue technician. The officer established command at the bottom of the cliff with another company member, while the rescue technician and the fourth company member, who had a basic rope rescue pack, made their way to the top of the cliff and began setting up for a high-angle rescue.

The technician’s initial plan was to rappel down to the victim on a 150' rescue rope while using a nearby climbing rope as a belay. However, once the duty chief arrived, that plan was overruled in favor of waiting for a second rescue rope to arrive on scene.

Rescue 92 arrived shortly thereafter with a crew of five, including four rescue technicians, and additional gear. The senior tech was designated Rescue Group Supervisor and put in charge of coordinating efforts at the top. It was decided to lower one rescuer with a basket litter to the ledge, where he would package the victim and then continue on to the ground. For a lowering on 300-foot-long ropes, they anchored a brake bar rack to trees, along with a separate belay system constructed of tandem Prusiks.

The SCFD9 members had trained for several years with the Arizona Vortex Multipod, and there was one on an apparatus at the scene. But because the plan was to lower the victim to the ground, not to haul him, it was decided that the rescue could be accomplished quicker and just as efficiently using edge rollers.

As additional TRT members arrived on scene, rescuers completed the rigging by attaching a tag line to the head and foot of the litter. This would allow rescuers below to pull the litter away from the rock wall.

Once the patient was packaged, he and the litter tender were lowered to the ground without incident. Firefighters and AMR personnel then carried the patient in the litter approximately 75 yards to the waiting ambulance.
At 1222 HRS, AMR transported the patient to Sacred Heart Medical Center. Total time from 911 call to ambulance transport was a little less than 2 hours.

After the victim and rescuers were off the cliff, a third rescuer rappelled down the climber’s route to remove the personal climbing gear and return it to the patient’s climbing partner. Once all rescue equipment had been returned and apparatus placed in service, a tailboard critique was performed prior to leaving the scene at 1300 HRS.

Lessons Learned / Lessons Reinforced:
(Provided by Jim Thoen)
1. “Related to the tiered response, all SCFD9 career firefighters are trained to the operations level, and technicians are often working throughout the district as well. Incidents such as this demonstrate the importance of rapidly getting trained personnel on scene to size up an incident and request additional resources, as well as establish anchors and, if necessary, access the victim.
2. “Rescuers are rarely called upon to perform rescues that are identical to training scenarios. However, SCFD9’s TRT regularly trains on high-angle litter rescue, and this incident was about as ‘close to normal’ as one can get.
3. “Most technical rescues require only a few rescuers to don harnesses. The problem: No one knows in advance exactly how many rescuers will need harness. In this instance, three rescuers went over the edge, and several more were tied off as edge attendants. There’s no substitute for personal preparedness.”