On May 8, 1997, 3 West Helena (Ark.) firefighters were killed in an explosion at a chemical packaging plant
By FireRescue magazine staff 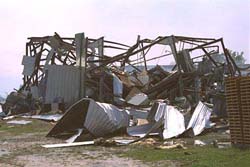 A team of four West Helena firefighters was attempting to locate a source of smoke at the BPS facility when the explosion occurred, causing a cinderblock wall to collapse onto the firefighters. Photos NFPA 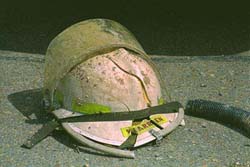 Stewart Warren was one of the three firefighters killed that day. Another 16 firefighters were injured in the blast. 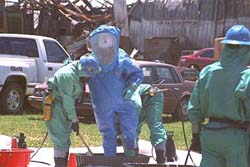 
On May 8, 1997, a fire at a chemical packaging plant sparked an explosion that killed three West Helena (Ark.) firefighters—Stewart Warren, Ed Hudson and Reginald Robinson. Another 16 firefighters were injured in the blast, which occurred at Bartlo Packaging Inc. (BPS Inc.), a bulk storage and distribution facility that packages agricultural pesticides and herbicides.

According to reports, a chemical was being offloaded into a warehouse when employees noticed smoke coming from the building. City emergency response personnel were notified. A team of four West Helena firefighters was attempting to locate the source of the smoke when the explosion occurred, causing a cinderblock wall to collapse onto the firefighters. One of the firefighters was rescued but seriously injured, and the other three died before they could be rescued.

The area of the explosion was inaccessible hours after the fire, and hundreds of residents, including patients at a local hospital, were either evacuated or sheltered-in-place. Area doctors had to give firefighters and residents atropine, an antidote to ward off the effects of the poisons. The shots had to be repeated every half an hour as long as exposure to the fumes continued. Property damage was extensive. Major roads were closed, and Mississippi River traffic was halted for nearly 12 hours. The fire took 2 weeks to extinguish.

EPA & OSHA Report
Approximately 2 years later, on April 29, 1999, the Environmental Protection Agency (EPA) and the Occupational Safety and Health Administration (OSHA) released a report on an investigation into the massive fire. The Joint Chemical Accident Investigation Team determined that the most likely cause of the explosion was the decomposition of a bulk sack of the pesticide Azinphos Methyl (AZM) 50W while in contact with a hot compressor discharge pipe.

The report indicated that root causes and contributing factors leading to the accident included 1) the lack of adequate information regarding AZM’s potential hazards in the AZM 50W Material Safety Data Sheet (MSDS) and 2) the BPS failure to recognize the hazards of a hot surface in a hazardous chemical storage area. The report identifies actions that should be taken by facilities that store, use, handle, manufacture or move hazardous materials to prevent future accidents.

NFPA Investigation
The NFPA Fire Investigation’s Department offers a play by play of the incident, as well as a list of factors that contributed to the loss of life and property. The full report is printed below.

“The building involved was approximately 2 years old and of unprotected, noncombustible construction. Most of the building’s area was used for storage of product. However, in one small production area where pesticides were repackaged, there were several offices in the building. The building was served by a wet-pipe sprinkler system.

“The Helena fire chief and his driver were just down the street when they heard the request for mutual aid, and they responded immediately. Upon arrival, both the chief and his driver observed yellow smoke coming from the facility. The Helena chief approached the West Helena chief, who was meeting with the facility personnel, for assignment. The West Helena chief handed him the MSDS sheets and asked him to evaluate the hazards being presented by the products.

“The Helena chief reviewed the MSDS sheets and, based on his evaluation, felt that it would be appropriate to pull back and develop a plan of attack prior to approaching the building. He was approaching the West Helena chief to relay this information to him when the explosion occurred.

“The explosion occurred as the West Helena firefighters approached the building to investigate the source of the smoke. The four firefighters were on the outside of the building and were struck and buried by debris.

“Immediate efforts were made to extricate the trapped firefighters by others on the scene. West Helena and Helena firefighters were able to rescue only one firefighter because of the severe fire. The other three were buried under debris that could not be removed quickly. The fire was rapidly growing, and the incident commander believed it involved chemicals that posed a high risk to all firefighters in the area.

“As a result, the incident commander ordered everyone withdrawn before the last firefighters could be removed and he kept all personnel at a safe distance until a hazardous materials response team from West Memphis, Ark., arrived.

“Since firefighters could not attack the fire and the smoke was considered to be extremely toxic, the focus of the fire department turned toward protecting the community from exposure. City, county and state law enforcement and emergency management agencies were notified. Evacuation of areas that could be exposed to the smoke was initiated. The local hospital was one of the many facilities in the evacuation zone.

“When the West Memphis hazardous materials (hazmat) response team arrived, they assessed the situation and planned a fire attack to determine whether they could extinguish the fire. Their attack had no effect on the fire, so the team decided that they could not extinguish the fire. Instead, they concentrated on recovering the three victims. This was successfully completed.

“The EPA dispatched a team to the incident, and they assumed command of the scene. Over the following days, an incident command structure was slowly created, incorporating the many agencies involved in the suppression and recovery operations.

“Several days into the incident, another private hazmat team arrived on the scene and began evaluating the situation. They conducted a more comprehensive evaluation of the scene. Based on this evaluation and their airborne monitoring, they established a new hot zone that was larger than the one that had originally been established.

“The fire gradually decreased as it consumed the fuel, and by noon on May 11, 1997, only smoldering spot fires remained.

“The building where the incident occurred was reportedly fully sprinklered. However, due to the damage, NFPA’s fire investigators were unable to approach the building to verify the details.
Furthermore, the plans to the building were destroyed in the explosion.

“The exact cause of the fire and explosion are unknown at the time of this report. Based on the NFPA’s investigation and analysis of this fire, the following significant factors were considered as having contributed to the loss of life and property in this incident:
• Inadequate size-up
• Delayed alarm
• Ignition of material
• Proximity of fire personnel to building containing identified hazardous materials
• Lack of a rapid intervention crew”