The fire service mourns the passing of Robert Barraclough, 70, who died at his home in Plano, Texas, on Friday, Jan. 21. A renowned expert on fire apparatus, Barraclough often referred to himself as “SOB—Sweet Ol’ Bob,” but he was also an amazing advocate for the fire service and a dear friend to all who knew him.

No services have been planned as yet, but a memorial in the spring reportedly is being considered.

Bob had been having difficulties with his health for the past few years, but not surprisingly, he dealt with those challenges with the positive spirit he exuded throughout his life. 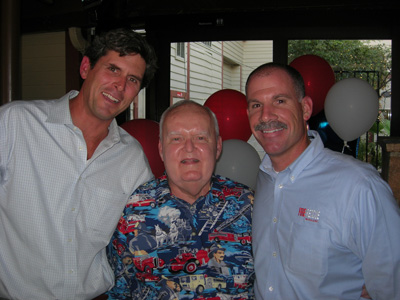 
Many came to know Bob through his many writings for most of the major fire service magazines—most recently his post as a columnist and editor for Fire Apparatus & Emergency Equipment magazine—and his speaking at national trade shows and conferences. Bob made such an impact on everyone he met—including me (I’ll share a specific anecdote from a tribute I wrote to Bob in a bit).

In addition to his writing and speaking, Bob’s fire service resume includes too many accomplishments to list, but here are a few:


A longtime resident of Texas, Bob was a native of Pennsylvania. He served in the Navy as a fire marshal on the USS Enterprise. He was a volunteer firefighter for much of his life, and his experience from the Navy and volunteer fire service stayed with him as he went on to serve with national organizations, associations, manufacturers and media.
When Bob spoke at trade shows and conferences, his wife Betts would often join him, and the pair would bring smiles to those they’d meet.

For me, what always stood out was how Bob had accomplished everything described above, and yet was so humble, and such a great listener—and questioner. Bob was always willing to help with a business question or idea, and he was great at telling simple truths.

In 2009, Bob celebrated his 50th year in the fire service with a great party in Dallas during the IAFC’s Fire-Rescue International. FireRescue Editor-in Chief Tim Sendelbach and I joined with so many of Bob’s friends, family and colleagues to acknowledge his many accomplishments and to thank him. I wrote the following tribute to Bob for the event. I know it’s only one story and there are likely hundreds of others out there in which Bob took a step and made a positive difference for the people involved. He made a real difference for me. Bob, you’ll be missed!


Bob Barraclough: 50 Years of Fire Service Leadership
August 27, 2009
Dear Bob,
It’s astounding to think of all you’ve done for the fire service. Improving apparatus safety, firefighter safety, making an impact in Washington, D.C., and so many other accomplishments you’ve made with your speaking, writing and networking. But more significant to me is the positive impact you’ve made personally on so many lives—through your kindness, and your uncanny talent for bringing people together.

It was at least 8 years ago, at the FAMA/FEMSA meeting in San Antonio. Toward the end of the day, Bob approached me. He was organizing a dinner that evening, to discuss how the fire service media could help the Congressional Fire Service Institute on a project. Would I be able to join, he asked? Of course I would....I arrived at the restaurant. Bob was with Bill Webb of CFSI, as well as Bruce Bowling of Firehouse, Henry Dineen from Fire Engineering, and Janet Wilmoth from Fire Chief. Bob made sure I had a seat right in the middle of the action and conversation. He asked for my input on the project, in which the media would help promote CFSI—which we all did. Bob was inspired in his rallying of the fire service media (which would otherwise often prefer not to acknowledge the other’s existence.) He got everyone on the same page.

Why is that dinner so significant? FireRescue had launched in 1997, combining Firefighter’s News and Rescue magazine. FireRescue was the new kid, and I was about as green to the fire service industry as I could be. Up to that point, FireRescue really wasn’t considered a player among the “majors.” That all seemed to change after that dinner. Suddenly FireRescue was on the radar screen, and we were able to continue that momentum without ever looking back.

The next year, at the CFSI dinner, MC Hal Bruno made reference to the fire service media, thanking them for their support and contributions. Sure enough, he singled out “Firehouse, Fire Chief, Fire Engineering and FireRescue magazine.”

I don’t know if you can fathom what kind of impact your kindness made on our business and on FireRescue magazine. And, of course, on me personally. What’s even more amazing is that knowing you, you’ve done this kind of thing hundreds of times over.

Bob, my deepest thanks to you and congratulations on your 50 years of fire service leadership.
Sincerely,
Jeff Berend