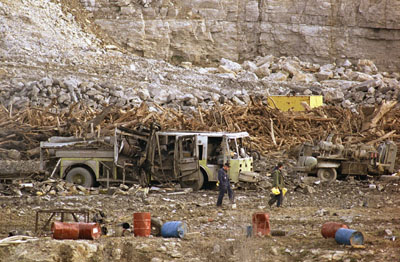 
On Nov. 29, 1988, at 0340 HRS, the Kansas City (Mo.) Fire Department received an alarm for a fire at a highway construction project. The caller reported fire on both sides of the highway—both in a small pickup truck and in an area a few hundred yards away, possibly containing explosives.

Pumper 41 was dispatched to the scene, and the dispatcher reportedly told them, “Use caution on your call. There’s information there may be explosives.” Pumper Company 41 arrived on scene 6 minutes later and found two separate fires, prompting them to send for a second pumper company, while they extinguished the truck fire.

The second company, Pumper 30, was advised of possible explosives and arrived on the scene of two trailers on fire at 0352 HRS.

Once Pumper 41 finished extinguishing the truck fire, the crew headed over to the other fire to assist Pumper 30. What neither company knew was that the burning trailers contained approximately 50,000 lbs. of a highly volatile ammonium nitrate/fuel oil mixture.

Then, at approximately 0407 HRS, a massive explosion occurred, instantly killing all six firefighters on scene. A battalion chief and driver who were about a quarter-mile away sustained minor injuries when the windshield in their vehicle was blown in. The explosion shattered windows within a 10-mile area and could be heard 40 miles away.

A second explosion occurred about 40 minutes later, although fire crews were staged at a safe distance at this time.

Indictments & Controversy
The tragedy set off a far-reaching investigation into who started the fires that ultimately led to the fatal explosion. However, it was not until 1996 that a grand jury issued indictments for five people: Darlene Edwards, Richard Brown, Earl Sheppard, Bryan Sheppard and George Frank Sheppard. All five were convicted of aiding and abetting the arson that caused the deaths of the firefighters, a capital offense. They were sentenced to life in prison without the possibility of parole.

In 2008, The Kansas City Star reported that 15 witnesses in the case were allegedly pressured to lie during the defendants’ trials, prompting the U.S. Department of Justice to open an investigation into the case.
Additionally, according to The Kansas City Star, in 2009, defense attorneys claimed they were never given a one-page police report that could have helped the defendants during their trial 12 years prior. They said the report could have been used to implicate other suspects in the case, namely two security guards who were on duty the night of the explosion.

The investigation is still underway.

Comment by JEFF REY WAYNE LAWSON on November 29, 2010 at 6:09pm
i know too well on the effects of these chemicals as i have had them on my truck in australia you have to been trained in carrying(hauling) these stuff because if you have a crash it could ignite and with so many cars having lpg gas it can cause a massive explosion