The 911 call—initially received at Police Department Communications and then directed to Phoenix Fire Dispatch—reported that a person had fallen on “the Praying Monk,” an 80' rock tower on Camelback Mountain that resembles a kneeling monk. The area is in the Camelback Mountain Echo Canyon Recreation Area between Phoenix’s Arcadia neighborhood and the town of Paradise Valley. It’s a popular recreation destination for hiking and rock climbing. 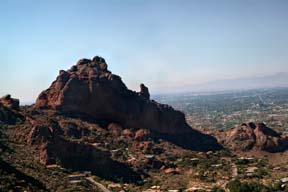 At 1625 HRS, the department dispatched Engine 12, Ladder 12, Engine 91, Battalion Chief 2 and Squad 29. Also dispatched was Squad 8, which was already on the mountain for familiarity training. Squad 8 heard the radio traffic but was not in the immediate area, so they began hiking to the incident site.

Engine 12 arrived at the parking lot and trail head at 1633 HRS and assumed command. The rescuers first on scene attached a fixed rope to anchors that were already fixed to rock, so that subsequent personnel could use their Purcell Prusiks to ascend the approximate 80 feet. About 10 rescuers used this system to reach the top of the plateau, then worked their way about a quarter mile around the top to the accident site.

Rescuers quickly found the fallen climber, a 26-year-old male, who had open fractures to both legs. He was lying on the ground and screaming in pain. He and three friends had been free climbing (climbing without ropes) when he lost his grip and fell approximately 25 feet.

The rescuers initiated patient treatment, including IVs with pain meds. They immobilized him and packaged him in a basket litter. They then placed the patient package in a Bauman bag, which encases the patient and protects him from helicopter rotor wash and other environmental concerns.

They then called in Firebird 10, an Agusta helicopter operated jointed by the Phoenix fire and police departments. The helo crew hoisted the patient into the ship for the short ride to a landing zone set up at the parking lot. He was then transferred to a Phoenix Fire Department Ambulance, Rescue 13, and was transported to Scottsville Osborn Trauma Center.

Sources: Phoenix Fire Department Captain Scott Walker provided information for this report. Some additional details from taken from accounts of the incident in The Arizona Republic and KTVK 3TV Phoenix.

LESSONS LEARNED/LESSONS REINFORCED:
Camelback Mountain, located in a major metropolitan area, attracts many recreationists throughout the year. Each year there are approximately 100 rescues on the mountain, ranging from simple ankle injuries to more serious injuries resulting from falls. Consequently, Phoenix Fire prepares its personnel with training and preplanning.

Preplanning and training played a huge role in the success of this rescue. Fire personnel had been out within the past 2 weeks in the same area, working on potential rescue scenarios. (Note: Training is scheduled every 3 weeks on all disciplines. Individual companies also train on their own as they see a need.)

The use of the helicopter hoist made the operation go faster and safer. Without it, the operation would have required several rope systems, ranging from steep-angle to high-angle, and it would have taken several hours to get the patient down.

Phoenix firefighters who are qualified rescuers are issued the following equipment:
• Class III harness;
• Assorted carabiners;
• Personal Purcell Prusik set consisting of three Prusik loops—two longer loops are used to attach two-loop foot Prusiks to the mainline, while a three-wrap Prusik hitch attaches the shorter harness Prusik to the rope. The set is used for personal ascending, for rescuer positioning and for self rescues.
• Personal Prusik;
• Rappel rack;
• Edge kit (20 feet of rope with a Prusik attached. Rescuers attach the rope to an anchor and the Prusik to their harness. This allows them to maneuver around a fall hazard area);
• Helmet with light;
• Gloves; and
• Hiking boots.
The department has placed permanent rock anchors in several locations in the parks in the valley. The anchors are female threaded rock anchors to which an eyebolt anchor can be attached as needed. All the department support trucks carry bolt kits.