Most firefighters and officers are familiar with the terms “strategy” and “tactics” as applied to firefighting operations. However, the true operational level of firefighting is not discussed much in firefighting literature nor overtly addressed in our practices. Because we traditionally use military terms to describe our work, including references to fire as the “enemy,” it’s useful to discuss “operational firefighting” using the military context as a reference. 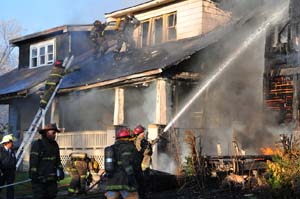 
Linking Tactics to Strategy
Generally, when the fire service discusses strategy, it involves three major goals: life safety, incident stabilization and property conservation. The desired end state is no lives lost, the incident doesn’t grow after our arrival and we conserve the property that hasn’t yet been affected upon our arrival. The tactics generally used to achieve those goals follow the mnemonic RECEO VS: rescue, exposures, confinement, extinguishment, overhaul, ventilation and salvage.

Again, the shortcoming in the fire service is our inability to articulate how we really link those tactics to the strategies. Part of that shortcoming can be attributed to the lack of emphasis we give on knowing the enemy, fire. The amount of time firefighters in the United States spend on fire behavior training is appalling. A total of 3 hours is required in the NFPA professional standards for Fire Fighter 1 and 2.1 I liken this to sending troops into battle without any knowledge at all about the enemy’s order of battle and capabilities. It is almost as bad as bringing a knife to a gunfight; somebody is sure to get hurt.

When the military prepares for the operational level of war, they consider criteria in two major areas:
1. Factors of space/time/force; and
2. Functions such as command and control, intelligence, fires (artillery, bombs, etc.), logistics, and protection and how these items affect employment of resources.2

Some of this should sound rather familiar to you, especially if you’re an officer. Let’s take a closer look at how military and firefighting operations compare on these factors.

Space/time/force: Think about the strategies and tactics mentioned above. Exposures are certainly affected by the amount of space between them and the fire building, travel time from the station to the scene is a function of space and time, delays in discovery and notification are time factors and the forces we can muster (and the time to assemble those forces) are also important considerations. If we throw in the speed at which lightweight construction is affected by fire, there’s a lot to consider here. All of this information will ultimately impact how the fire is to be fought (or not fought if it becomes totally defensive.)

Command and control: Command and control is self-explanatory, but as second nature as it is for many departments to employ a formal fireground command structure, some still do not think it’s necessary and are therefore creating an additional risk for their personnel. It’s difficult to share how the strategies are to be realized without a commander to oversee the development and sharing of a plan.

Intelligence: How does intelligence relate in this model? Preplanning is certainly an act of gathering intelligence about the battleground. Knowing the details about a building or an industrial site is great foreknowledge about the enemy’s order of battle. It’s essential to study fire behavior and possess an intimate understanding of how the fire develops, what affects its growth, how smoke burns and how air tracks can greatly influence the fire. Using this knowledge during reconnaissance or size-up will help immensely in determining where the fire is and where it’s going to be by the time forces can be deployed to fight it.

Fire is predictable; know thy enemy and his tendencies. As Sun Tsu said, “Therefore the clever combatant imposes his will on the enemy, but does not allow the enemy’s will to be imposed on him.”3

Fires: Fires is an easy comparison and somewhat ironic as our “fires” is actually water and not ordnance. We have master streams (water cannons) and our handlines are analogous to crew-served weapons, such as mortars and heavy machine guns. In any case, the problem is achieving effective application of the ammunition. Are we going to lob the water in from a distance, or can we get up close and personal? It depends on what our intelligence effort tells us about the disposition of the enemy and what resources we have available to employ and engage the enemy.

Logistics: We must ensure the troops have the material they need to take the fight to the enemy—“beans and bullets,” in the military vernacular. This would include air cylinder recharging (or spares), communications, food and water for rehabilitation, medical care and all the other support services. Logistics is often determined by whether the incident is a large-scale campaign, such as the huge wildfires experienced in the western United States or recently in Greece.

Protection: When considering protection, the military is considering how to keep their lines of communication and staging areas secure from attack. We’re more interested in the personal safety of our firefighters through the proper use of personal protective equipment, a thorough risk assessment and the employment of incident safety officers. Occasionally this may include the use of law enforcement personnel to keep angry citizens at bay, such as during periods of civil unrest.

Study Your Art
If we reflect on how we reach the desired end state described by our overarching strategies, one can see that the operational factors and functions play a key role in the proper selection of operational mode (offensive or defensive) and tactics. Your knowledge, skills, abilities and experience play an important role in how the art of operational firefighting is employed on an incident. Formalizing how you approach your study of fires and combating them and considering the operational factors and functions in a conscious manner will allow you to make the best risk assessment possible before sending your charges into harm’s way.
Remember: Learn as much as you can about fire behavior. On some fires, simply opening the front door may the biggest mistake possible. Don’t be your own worst enemy!

Warren Whitley is an assistant chief with the Prince William County (VA) Department of Fire & Rescue with 29 years of service. He has an MPA from VA Tech and an MA from the Naval War College and is a Commander in the Coast Guard Reserve.