No Blood Is Thicker

No Blood is Thicker 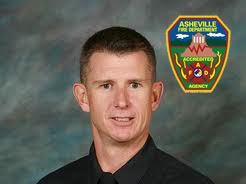 I was devastated to learn of the death of Captain Jeff Bowen of Asheville, NC's Rescue Company 3. He leaves a wife and three children without a husband and father. Any LODD is a terrible tragedy, but this one hits - literally - close to home for me.
You see, Asheville is my home town. I was born in Memorial Mission Hospital, less than a block down Biltmore Avenue from the fire that killed Captain Bowen. The funeral home that handled Captain Bowen's arrangements is virtually next door to the office that housed my father's physician practice before he retired. One of my earliest memories is a 3rd-grade field trip to the Asheville Fire Department's Pack Square headquarters station. I have many family and friends in Asheville, including members of the fire department.

I attended Captain Bowen's funeral last Tuesday. I was impressed by the strength shown by the Asheville firefighters and the regional solidarity shown by fire departments throughout North and South Carolina who were there to honor Jeff's memory. I was also impressed by the thousands of citizens who lined the processional route waving flags, hands placed over hearts, and many crying their eyes out. The citizens of Asheville "get it". They understand at a very basic level that the Asheville firefighters literally put their lives on the line for people that they don't even know. They understand how important the fire department is to protecting the public's lives, property, commerce, and the environment. They understand that even in a down economy that fire and rescue services are essential to us all. Most importantly, they understand that an Asheville firefighter gave his life so that others could live.

I did not know Captain Bowen personally, but Chief Burnette, Chaplain Baird, and especially Jeff's daughters made all of us at the funeral wish that we had known him. In addition to being the captain of Asheville's rescue company, he was an expert in technical rescue, a member of the department's hazardous materials team, and a member of the swiftwater rescue team. As I do, Jeff loved the water. He obviously had a great love for his family, too.

One of Jeff's daughters described being adopted and how Jeff helped her handle some of the cruel things other kids said to her about not being his biological child. While comforting her, Jeff told her something that only a father would say; "Blood is no thicker than water, but no blood is thicker than blood you would shed for another."

Jeff not only shed his blood for another, he died while making sure that 200 patients and medical staff made it safely away from the fire. Many of those patients were very sick and mobility-impaired. Every one of them made it out of the building. Captain Bowen and sixty other Asheville firefighters made sure of it.

Two days after the funeral, I was stunned to learn that the fire cause was arson. The contrast could not be more stark; someone with callous disregard for human life set fire to a five-story office building packed with people during the middle of the day. Another gave his life to ensure that the arsonist only murdered one person instead of hundreds. Not only did that arsonist kill a firefighter, he injured several other fireighters, some seriously. If not for the AFD, hundreds of doses of chemotherapy drugs in short supply would have been destroyed. Medical treatment for thousands of people has been disrupted, and over 20 million dollars of damage was done. There is truly evil in this world, personified by the arsonist. There is also much good in the world, personified by Captain Jeff Bowen.

Rescue 3's Oregon Avenue firehouse is a sadder place these days. but the rescue firefighters still show up every day. The heavy rescue that Jeff loved so much still rolls out the doors, staffed with firefighters who share his dedication to helping other people who are in need.

The Memorial Mission Hospital Foundation has started a memorial fund to assist Captain Bowen's family. The hospital will match contributions dollar-for-dollar up to $10,000. You can donate online by contacting the Fallen Firefighter Fund. I urge you do donate to help Jeff's family with the struggles that come with losing a husband, father, and provider.  You can also contact me for more information at the All Hazards Contemplations blog.

Jeff Bowen is - simply put - an American hero. So is every other one of the Asheville firefighters who responded to 445 Biltmore Avenue on July 28, 2011.