Recently, I finished reviewing the December 2008 National Incident Management System (NIMS) update. It wasn’t light reading so it took me a while to get through it, but it was a good review and an informative update. The 158-page document can be found at www.fema.gov/nims.

I’ve been reading and hearing about many who are less than happy about the latest revisions. Although I would agree that the online courses are problematic at times, or that the Typing needs to be finished, overall it’s an improved document.

The only constructive comment I would offer the debate: Don’t lean too heavily on the online self-study and testing. Studying NIMS and the Incident Command System (ICS) is best done as a team sport and small-group activity, similar to what we experience in the field.

Over the years I’ve been fortunate to have been taught by some of the best field trainers in command and management techniques, as well as disaster response, at California’s former Fire Command Education Center at Asilomar and the California Specialized Training Institute (CSTI) in San Luis Obispo. At the former Asilomar facility, Northern California fire commanders met Southern California commanders, creating a “learning laboratory” that was lost when classes were opened up across California, supporting regionalized inbreeding.

CSTI continues to be a great place to take courses on disaster preparedness and response. They were, and continue to be, leaders in the field of terrorism response long before it became popular and formed its own cottage industry.

Seeing It in Action
Similar to my experiences as a student, as an ICS instructor I witnessed firsthand the benefit that a classroom environment can bring to student learners, giving them a deeper understanding of terminology, command principals and operational concepts. But my true understanding of the value of NIMS and ICS has come from field Operations.

But my purest ICS moment came some years ago as we raced across California toward a community being devastated by winter flooding and levee breaks. As we neared the town with our state-sponsored 14-person Swift Water Urban Search and Rescue Team, we received the word that a levee had broken and four people were trapped on top of a vehicle.

Almost at the moment we entered the small rural town, an updated report advised that all four had been swept from the vehicle and disappeared under the fast-moving water. It was a moment I’ll never forget. 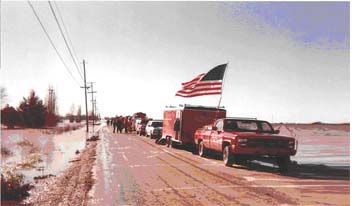 Becoming a Defender of the System
We were directed to the airport, where we found the local incident commander, a Deputy Sheriff outfitted in a dry suit who had obviously been engaged firsthand in field operations. My chief, seeing his struggle, assigned me as a liaison to the deputy, who clearly wasn’t comfortable with the arrangement but felt obligated to accept the offer. Needless to say, I wasn’t wild about missing out on field operations and getting stuck in what appeared to be a nonexistent and dysfunctional command post.

Before the chief left, he advised me that he expected two things: “Help this guy get organized and make sure to get us some valuable work.” I had no intention of letting my chief down nor wasting my time, so when the deputy advised me that he was resuming field operations as a helicopter landed on the tarmac at the airfield, I became an unwilling but nevertheless compelling salesman and advocate for the ICS.

We eventually came to a mutual understanding, and after locating a map of the town on the wall of the airport, we began to get organized by using the natural alphanumeric grid of the map to divide the 33-square-mile flooding event into manageable and trackable sections. From there we established organized unit assignments, established an air branch with a reconnaissance plan, started to track searches and documented homes searched and victims/animals found.

As we became comfortable with one another, I asked the deputy if he’d been trained in the ICS; he admitted that although he had some training, nothing he’d learned could have prepared him for a flood of these proportions. He turned out to be a great guy who was obviously used to working by himself to patrol a large rural area and town. We developed a mutual friendship created under adversity and challenged by circumstance. He learned to trust me and in return I showed him respect and loyalty—even during some difficult and tense moments that threatened to pit law enforcement against fire for control of the event.

Although I was disappointed that I wasn’t able to share in our team’s successes that first day as they rescued 18 people and hundreds of animals, I was proud of how well the deputy and I had worked together to organize and manage the event by using the ICS, truly proving how adaptable the system is.

The Verdict
NIMS/ICS is not perfect, but neither are most incident commanders or responders who try to instill calm in the face of fear and create organization out of chaos. NIMS/ICS is a good tool that has only gotten better over time and will continue to improve based upon the strength of its adaptability.

Harold Schapelhouman is a 27-year veteran firefighter with the Menlo Park (Calif.) Fire Protection District. At the start of 2007, he became the first internally selected fire chief in 21 years for his organization. Previously, he was the division chief in charge of special operations, which includes all district specialized preparedness efforts, the local and state water rescue program, and the local, state and national Urban Search and Rescue Program (USAR). Schapelhouman was the task force leader in charge of California Task Force 3, one of the eight California USAR teams and one of the 28 federal Department of Homeland Security (DHS/FEMA) teams.

Comment by Ed Cornish on September 1, 2009 at 2:14pm
I know of one county set of departments who have thrown out the NIMS sysytem and gone back to the old way of doing things. They're thought is if it ain't broke don't fix it. They also understand that it means no funding but no one in thier area has recieved one dime of the funding available. All the major municipalities in thier area with billion dollar budgets have sucked up the $$$. They rely on old donated fire equipment for thier small area and make do with what they can invent or build. People are being discliplined for not following the NIMS system or get it wrong when the ### hits the fan at the time. Thats just plain wrong. Did we save the structure and lives??? Nobody got hurt??? Then we did our job and all went home. You need a collage degree to understand some of what is writen in the NIMS, and some of those who don't understand just plainly say forget it. In my opinion, if your going to have a sysytem that needs to work, write it in plain english and not 158 pages.