The rescue company has just rigged the anchors for a rope-rescue pick-off. As the rescue safety officer, you ask yourself a series of questions about the anchor system: How much weight can the anchor points hold? How much weight will be applied to the various anchors? What is the Static System Safety Factor (SSSF) for the anchors? Have we created a system that will fail? In this article, I’ll address the amount of weight applied to the anchors and how to estimate this force with a reasonable degree of accuracy in the field.

Understand the Force
When a force is applied perpendicular to a stationary object, such as a rope attached between two anchors, that force will be transferred outward from the point of contact to the terminal ends. The magnitude will increase or decrease depending upon the angle between the anchors and the direction of force. This is referred to as a vector.

A very simple demonstration will show this effect. Have two rescuers pull a 20' piece of rope between them as if having a tug-o-war. Instruct the human anchors to keep tension on the rope while a third rescuer pushes the middle span of rope away from the centerline with one hand. The effect will be an increase in force magnitude, resulting in the movement of one (or both) of your anchors with little to no effort on the part of the third rescuer.
Now have the anchors stand shoulder to shoulder with the third rescuer pulling from the middle. Did the anchor move with this smaller angle? Nothing has changed other than the angle of the force; it’s still the same piece of rope with the same rescuers, yet the anchor doesn’t move.
Determine the Vector
The customary method taught in rope-rescue class requires the students to memorize an angle chart. This chart provides the multiplier factors for the most common angles found at the main attachment point of the anchor system, with the mantra, “Keep it less than 90 degrees.” This works fine for most operations provided that 1) you’re a decent judge of angles, 2) you can actually visualize the entire system, 3) the vector (fall line) is symmetrical to the anchor points and 4) you’re applying the angle to the anchor system only. 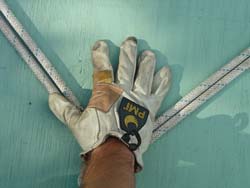 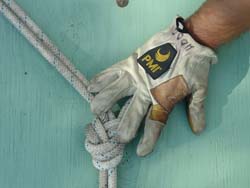 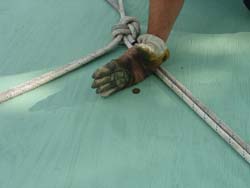 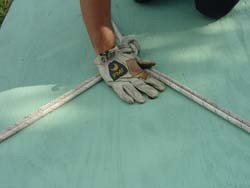 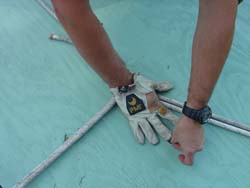 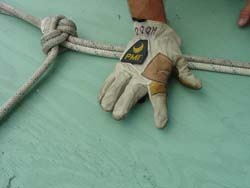 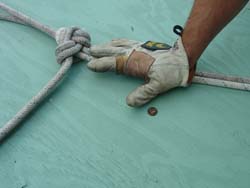 To apply the method, you must first determine the fall line. It matters little if the anchors are symmetrical or asymmetrical. Once the direction has been determined, place the heel of the hand against the attachment point of the load, aimed toward the anchor points with the middle finger, like a compass, showing the direction of the energy from the load.

Mark the location on the ground where the tip of the middle finger is located, this can be through the use of chalk, scratching the dirt or placing a coin. From this reference point, draw an imaginary line parallel to the attachment point and one anchor. It does not matter which side is chosen. With the hand, follow this line until you bisect the opposite anchor line. You will have determined the force vectored to the anchor of the line you have crossed.

If you bisect the anchor line at the joint of the middle finger, you have a 0.70 factor to the anchor you’re pointing toward. Simply multiply the estimated load by 0.70 and you’ve determined the static load applied to this anchor point.

Where you’ve bisected the anchor line, mark the location and reposition your hand with the heel of the hand placed at the bisection point. The middle finger should now point in the direction of the attachment point. The force vectored to the anchor line opposite the one you’re following can be determined by the position of your hand. Once again, if you bisect with the tip of the middle finger, you have a 1.00 factor on the other anchor point.

Application
The following three examples will demonstrate what occurs when a simple directional movement of load changes the system from symmetrical to asymmetrical.

Example 1: In photo 1, the angle from the attachment point to the anchors is 90 degrees with a symmetrical load. The hand is placed with the heel against the knot at the attachment point, and the middle finger is pointed in the direction of the force applied. A penny is placed where the fingertip touches the ground to provide a visual reference point.

In photo 3, pivot the hand on the right leg of the anchor system while maintaining the bisection point at the heel of the hand, and redirect the middle finger toward the anchor attachment point. Once again the mark is determined to be at the joint of the middle finger.

This system is balanced. If the load was determined to be a rescuer and a victim estimated to weigh 450 lbs., the load applied to each anchor would be 450 multiplied by 0.70 or 315 lbs. per anchor point. Depending upon the desired SSSF, the anchor selection will vary. At an 8:1 SSSF, the weight-carrying capability of the anchors would have to be 2,520 lbs. each. A 60-ton rooftop air handler with a curb weight of 2,500 lbs. will provide you with the 8:1 SSSF. If we use a 3-ton unit, which has a curb weight of 400 lbs., the SSSF would be 1.25:1—not much room for error or the increase in force seen during a fall.

Example 2: Compare what effect moving the force direction, making the system unbalanced, has upon the individual anchor points.

In photo 4, the heel of the hand is once again placed at the attachment point with the middle finger pointed in the direction of the force. The line does not evenly bisect the anchor points; notice it lies more to the left of the center line.

In photo 5, the hand is moved and placed to bisect the left leg while pointing the middle finger toward the marker penny, maintaining a parallel line with the right leg of the anchor system. As you can see, the reference is at the palm of the hand. Following the hand rule, this equals 50 percent for the left anchor.

In photo 6, rather than pivot the hand as in photo 3, the rescuer moved his hand to the right side of the anchor attachment and points at the reference point for the line of force. The fingertip reaches the penny exactly, signifying 100 percent of the load.

If we use the same rescue load and anchors from the previous example, we would see 450 lbs. multiplied by 0.5 on the left leg and 450 lbs. multiplied by 1 on the right leg for a total of 225 lbs. on the left anchor and 450 lbs. on the right anchor—not exactly the 337 lbs. for each anchor point we would have arrived at using the angle chart. Of greater significance, the 3-ton rooftop unit will be relying entirely upon the fasteners to the curb to hold the anchor in place since we’ve created a force that exceeds the weight of the anchor.

Example 3: You see in photo 7 that the system is out of balance. Looking at this photo, what would you estimate the angle to be for this anchor system? This example considers a 135-degree angle between the two anchor points with an asymmetrical fall line. In photos 8 and 9, you can estimate the forces found with the same rescue scenario at 250 lbs. for the right anchor point and 495 lbs. for the left anchor point. Remember that the entire hand is 100 percent plus a single finger width adding an additional 10 percent for a total of 110 percent. This can be reasonably estimated as seen in photo 9.

In Sum
As you can see from the various scenarios, the vectoring of force does not always allow for the application of a simple chart memorized in rope-rescue class. If you have the convenience of bomb-proof anchor points at every rope-rescue operation you turn out for, then the information I have relayed is really of no significance. If, however, your choices for anchor points are not so solid, it benefits the entire rescue operation to consider potential forces while rigging.

As with any new skill, the technique must be practiced. With the application of this simple technique, the rescue technician is better prepared to make informed decisions regarding selection of equipment, anchor points and manpower at the rope rescue incident.

William Burns has been in the fire service since 1990, having worked for career departments in New Hampshire, North Carolina and Florida, as well as for a volunteer fire department in New Hampshire. Burns currently works as a lieutenant in the Special Operations Division of Brevard County Fire Rescue in east-central Florida. His special operations work began in 1994 and, since then, he has worked for rescue and hazmat companies as well as the Florida Task Force-4 USAR team. Burns has an associate’s degree in fire science, an Instructor II certification and a Fire Officer II certification. He has developed compliant certificate programs for rope, confined space, trench, vehicle and machinery rescue as well as firefighter survival. Burns has instructor privileges in Florida for technical rescue, hazmat, firefighter survival and shipboard firefighting.