In my last article, I wrote about the three main criteria you should consider when choosing an exercise program for yourself and/or your department: safety, applicability/functionality and ease of use by people of varying ages and fitness levels. This article discusses the kettlebell, a piece of equipment that meets all three criteria and can actually be used for a wide variety of unique exercises.

Kettlebell History
For this information, I had to refer to our department’s kettlebell subject matter expert, Bob Ross, a 52-year-old firefighter/paramedic who’s been on the Phoenix Fire Department for 27 years. He’s also a Russian Kettlebell Challenge (RKC) certified instructor who rehabilitated himself from back surgery after sustaining an injury in 2003 that could have ended his career. He began using a kettlebell after reading an article about a new exercise program that involved using a “cannonball with a handle." After two short weeks, Ross’ back felt stronger and less painful. He also noticed that his cardiovascular strength was starting to increase. In 2005, he became certified by the RKC. The RKC was the first kettlebell instructor course offered in the United States, and continues to certify instructors today. I’ve worked with Ross and can attest to his excellent fitness level as well as the applicability and benefits of working out with kettlebells.

According to Ross, the kettlebell is more than 200 years old and was initially used by Russian meat butchers as a counter-weight for their meat scales. Although it’s not certain which butcher was the first to recognize the kettlebell’s potential as an exercise tool, it’s safe to say that the idea caught on and even became popular among Russian strongmen. Eventually, the kettlebell became a tool for training Soviet soldiers, and in particular, the Soviet Special Forces. Pavel Tsatsouline, a physical training instructor for the Soviet Special Forces, introduced the kettlebell to the United States in 2001. Tsatsouline remains one of the most experienced and knowledgeable kettlebell instructors to date.

Key Kettlebell Characteristics
The kettlebell’s functionality and applicability comes from its design and the exercises that can be done with it. The first thing you notice when hoisting a kettlebell is its comfort. The weight hangs in your hand and is easily balanced. This is because the weight of the kettlebell hangs below your grip. It’s this design that allows the kettlebell to be held loosely and rotated or “flipped” in your hand without dropping it when performing movements like the kettlebell swing. You can’t do that with a dumbbell. A dumbbell requires a stationary and firm grip; otherwise you run the risk of dropping it. 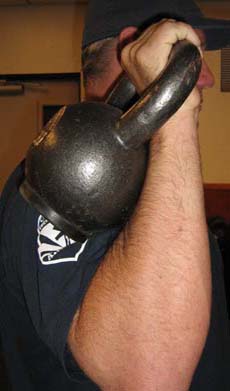 One unique benefit of the kettlebell design is that it can be held with a straight wrist, with the handle sitting on the “shelf” of the palm rather than in the palm itself. Photo Mike Ong 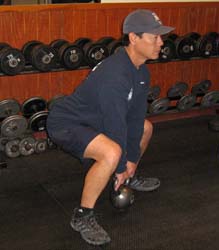 To perform the kettlebell swing, you must first get into the squat position while holding the kettlebell with both hands in between your legs. Photo Mike Ong Your intention is not to catch or resist the kettlebell as it descends. Rather, you should direct its weight to fall between your legs in order to repeat the hip snap movement once the kettlebell has bottomed out. Photo Mike Ong

Another unique benefit of the kettlebell design is that it can be held with a straight wrist, with the handle sitting on the “shelf” of the palm rather than in the palm itself. This is because the weighted or ball end of the kettlebell rests on the outside forearm while the handle sits on the “shelf.” The result is a diagonal force that moves down through the wrist, unlike a dumbbell where the force is to the sides of the wrist. This is especially noticeable when doing shoulder presses; you can feel the stability in your wrist when using a kettlebell as opposed to a dumbbell during this exercise. In addition to the stability, the kettlebell is great for developing grip and forearm strength.

Another key aspect of kettlebell exercises is that they’re designed to complement a joint rather than compromise it. They also tend to involve compound movements, which recruit more muscles, rather than isolation exercises that target individual muscles. Further, movements like the Turkish Get-Up increase strength and flexibility in tandem, an advantage you don’t find with traditional barbell or dumbbell lifts.

Note: Before you start throwing your dumbbells away, keep in mind that they are and will always be a great workout tool. In fact, dumbbells have replaced the barbell in all my free-weight lifts, with the exception of the squat and the dead lift. But for those with wrist problems, the kettlebell may be a better option for presses.

The Kettlebell Swing
One foundational exercise that’s truly unique to the kettlebell is the swing. This exercise has numerous benefits, especially for firefighters. First, it’s truly a total body workout—and not the infomercial kind, if you know what I mean. It employs lower- and upper-body muscles to lift, resist, stabilize and explode, all in a rhythmic, repetitious manner.

Second, the benefits to the lower back region in particular are substantial because it loads and unloads the lumbar through a squat-like range of motion. It is this tension and relaxation process that not only strengthens the back, but serves as an injury-prevention mechanism for the back. The development of a strong core has long been known to help prevent lower back injuries, and the swing does a phenomenal job in recruiting the abdominals.

Third, the swing builds your VO2 max. If there’s one thing that firefighters must have, it’s cardiovascular conditioning. It is of no benefit if a firefighter is able to squat 500 lbs. but lacks the cardiovascular capacity to make a difference on the fireground.

The reason the swing builds cardiovascular conditioning is because it takes the lower and upper body through a squat-like range of motion, initiated by an explosive hip snap. The hip thrust or “snap” has the benefit of a plyometric exercise without requiring you to leave the ground. It is also a continuous, rhythmic movement, so there's no pausing between repetitions; you either stop your set or you keep going until you hit your goal. Those who’ve done plyometrics know how taxing they are to the cardiovascular system.

You can view all kinds of kettlebell exercises, including the swing, on the Internet, so I’ll only cover a few of the finer points. The key to the swing isn’t your arms; it’s the hip snap, because it drives the kettlebell upward. In fact, you should think of your arms as ropes that connect the kettlebell to your shoulders. More hip snap equals more leg recruitment, which sends the kettlebell higher.

Also, knowing how to perform a good squat helps keep the spine in correct alignment and the glutes reaching back as you descend during the swing. Lastly, your intention is not to catch or resist the kettlebell as it descends. Rather, you should direct its weight to fall between your legs in order to repeat the hip snap movement once the kettlebell has bottomed out.

Practical Benefits
In addition to the kettlebell’s physical benefits, it has some practical benefits as well. Kettlebells are virtually indestructible and require no maintenance. Remember, they’re cast iron, so unless you drop them, they should last a very long time.

They’re also relatively cheap. The going rate for a decent kettlebell is about $2 per pound, not including shipping. I found a local merchant and purchased in bulk to reduce the overall cost. Every fire station in our department received a set of kettlebells, along with an instructional DVD.

What to Look For
If you’re looking to purchase a kettlebell, make sure that it has a relatively thick handle that’s free of defects. The handle will naturally be a bit rough since it’s cast iron, but what you don’t want are large protrusions or crevices in the handle, because it will be rotating in your hand.

Also, make sure that you can fit both of your hands inside the handle side-by-side, especially with the heavier weights. Lighter-weight kettlebells are usually used with a single hand, but as you start to do some heavier swings, you’ll need two hands on the grip.

Lastly, weigh the kettlebells. Because they’re cast iron, the weights may be off. It’s not a big deal if you’re using one kettlebell, but when you start using two at a time, it’s nice to have two that weigh the same.

Kettlebells originally weighed 1 pood, an old Russian unit of weight equaling 16 kilograms or about 35 lbs. Now you can get kettlebells in virtually any weight, but popular weights are 16, 20 and 24 kilograms.

Conclusion
It’s a bit ironic that one of today’s more progressive exercise programs uses equipment that’s more than 200 years old, without much change from its original form. The kettlebell is now a staple in mixed martial arts gyms, athletic training rooms and now, fire station gyms. I have both tortured myself and benefited from using kettlebells and believe that they add variety and a huge benefit to anyone’s exercise regimen.

Comment by joseph verneer on March 30, 2011 at 6:53pm
awesome I love free weights .lots of the guys here do px90 i get better results with free weight .I never saw kettlebells but it looks like a great workout.