There are over a million individuals who identify themselves as firefighters. Almost 350,000 make firefighting a career, 292,000 of them are members of a local chapter of the International Association of Fire Fighters.

Two-hatters are IAFF members who volunteer at another department that is represented by another IAFF local. The conflict is about the activity of a trade union member in another local's jurisdiction and the compliance with the rules and regulations of the International.

Former Kentland volunteer and Local 1619 President Tom McEachin introduced Resolution 43 at the 2000 IAFF convention. Two-hatters and their allies engaged in a campaign that gained national attention.

John A. Mutchler, a former member of the PG Fire Commission, created an excellent repository of information about this issue HERE.

Two-hatting is a polarizing and emotional issue. Phantom, a DCFD employee and PG volunteer, describes the start of TheWatchDesk (TWD):

The concept that underlies the operations of TWD had their start in late 2000 when International Association of Firefighter's Local 1619 attacked members of surrounding locals for volunteering in Prince George's County Volunteer Fire Stations.

... This board quickly became controversial and moved into private ownership with better software, it was then that Phantom registered the name "TheWatchDesk.com" and with the help of Zorro established the site.

NATIONAL CRISIS OVER A LOCAL ISSUE

As the issues were spun-up the nature of the discussion changed. Moving beyond TheWatchDesk forum, most of the posters on the fire service message boards were NOT an IAFF or PG volunteer member.

Fire service opinion leaders and pundits also weighed in. PG is a busy urban county that provides varsity-level firefighting. The editorials and articles had nothing to do with the PG issue but added to the angst, anger and static of volunteer-versus-paid debates.

After months of back-and-forth discussons on TheWatchDesk, "Brother vs. Brother" was published in the January 2003 issue of Fire Chief magazine (HERE)

This example was the driving force to write the article:

Former volunteer fire chief and Pennsylvania Congressman Curt Weldon made a statement on the floor of the House of Representatives on Feb. 27, 2002, asking, “Does this mean that those career firefighters from other departments that went to New York City would lose their union cards if this were enforced because they were volunteering to help their brother firefighters in a time of need?”

I continued participating in two-hatter message board discussions. There were other high-profile PGFD activities that kept firehouse.com forums hopping. 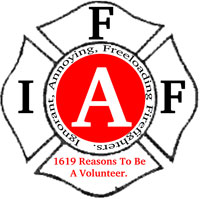 A 2007 issue became a public policy case study. The Battle Over Kentland Ambulance 339

The two-hatter issue became old. The Resolution 43 trial boards made it clear that DC Local 36 does not care about two-hatters.

The Illinois delegation submitted Resolution 2 at the 2008 convention.

Resolution 2 directs the IAFF to delete Article XV, Section 3 and insert a new subsection to the list of defined misconduct as “working a secondary job part-time, paid on call, volunteer or otherwise as a firefighter, emergency medical services worker, public safety or law enforcement officer, or as a worker in a related service, whether in the public or private sector, where such job is within the work jurisdiction of any affiliate or which adversely impacts the interests of any affiliate or the IAFF.

Upon a finding of guilt…it is recommended that the penalty include disqualification from holding office in any affiliate and/or expulsion from membership for the period that the misconduct persists. Charges filed for the misconduct described…shall be preferred by a member of the charged party’s local and/or member of an adversely affected affiliate.”

The expansion of the description of misconduct activity addresses a problem in Illinois with union members working as PART-TIME firefighters at another town with full-time IAFF members. The part-timers are working for an hourly rate that is 30-50% less than the hourly rate for full-time firefighters. More information in THIS blog item.

Title from the January 28, 2009, entry by FirefighterNation and IACOJ blogger Art "ChiefReason" Goodrich. Read it HERE. This post received 55 comments on FFN and 123 comments on the International Association of Crusty Old Jakes.

The post generated passion, heat and inaccurate assertions. Most of the posters are not IAFF members. A few remind me of "experts" who know that it was a US missle/truck bomb and not a hijacked 757 that hit the Pentagon.

Chief Goodrich provided 22 years of service to an Illinois volunteer department. He responsed on the IACOJ message board:

I belonged to a union, but it wasn't a firefighter union, but I don't think any union is so different from another in terms of purpose. They all seem to operate off of a similar set of core values and missions.

I have not been in the career fire service, but have had some collateral exposure to it in my mutual aid assistance.

And if anyone who read and understood my motivation for writing the blog, it was more from a "civil liberties" focus and in no way, do I buy in to the hysteria that the IAFF is going to drive volunteers from the service, because I know that it will never happen. At least, not in my life time.

I was an engine company commander working at a busy station where seven of the nine members of the shift were African-American. Some firehouse kitchen discussions ended with ... "It is a Black thing, you would not understand."

I appreciated that their experience, background, expectations and "hot button" issues are different than mine. Not better or worse, just different.

I had transformational experience that was different from Goodrich's collateral experience responding with career crews on mutual aid. My first assignment as a county firefighter was at the station where I started as a volunteer.

There was a dramatic change in perspective when I had to work at the place I volunteered at. Some of the features of the volunteer station I thought were "cool" when spending a weekend at the VFD became a problem when I worked 56 hours a week at the house.

Had a similar experience when I went from adjunct to full time as a university professor. In both cases I was not expecting such a change, since I had years of experience as a volunteer firefighter and a part-time professor. I had skill sets, but I did not "know the job."

I have been a member of other labor organizations. The IAFF is different.

The unique history of the fire service results in convoluted isues. One hundred years ago career firefighters worked continuous duty, getting just one to two days off a month. No other municipal employee worked that schedule.

I no longer entertain the fantasy that I can change anyone's mind, regardless of the research, examples or well-crafted message board postings. It is tiring to see the same innaccurate "facts" spewing from non-union firefighters when discussing two-hatters.

When the next event starts another barrage of message board posts by non-unionized firefighters, I will respond:

Comment by Joe Stoltz on February 8, 2009 at 12:39pm
If I understand all of the facts properly, the IAFF does NOT discourage its members from volunteering in departments that have no career members at all, thus no possible affiliation with the IAFF.

Such departments would be found in rural areas, where off-duty career members could be a huge asset during day time operations.

Am I correct in this interpretation?

Comment by Jeff Crow on February 8, 2009 at 12:30pm
Fascinating post. I am a dues-paying IAFF Member, but sometimes (often) my union's actions are a source of embarrassment. This is one of those occasions.

As I blogged in response to your piece,

"...I love when our union Lords and Masters try to run our lives away from work--like telling us to vote for far left-wing candidates, or better yet, donating our union dues to candidates and causes that most of us despise. We all know that, while the IAFF leadership tends to support radical left-wing candidates and causes, most rank-and-file firefighters are moderate to conservative in their personal beliefs. Likewise, most professional firefighters see no conflict of interest between their paid jobs in bigger cities and their volunteer or part time work in smaller communities nearby..."

The IAFC can establish any position it wishes, so can you, Art and I. If you read the"Brother vs. Brother" article, the IAFC leadership provided a different response in a November 2002 press release:

“While the IAFC disagrees with this particular IAFF membership rule, we must respect and defend each organization's ability to independently set its own rules and requirements through its own democratic governing process. We encourage the IAFF to internally engage in discussions to address this issue and work to find a solution that is acceptable to both the IAFF and the volunteer fire service."

Comment by Art "ChiefReason" Goodrich on February 7, 2009 at 7:34pm
Mike:
Great blog!
Believe it or not, I am not the enemy.
Because of guys like me, there are guys like you.
And that's a good thing!
But, for our own personal reasons, we respectfully disagree on some issues.
That's why I love this country, this fire service and the people who take the time to eloquently articulate their thoughts.
And that ain't just blowin' smoke, my friend.
TCSS.
Art

A lot of the anti-two-hatter IAFF members work side jobs as carpenters, electricians, plumbers, or in other trades, and they do it for personal financial gain, not voluntarily protecting their community. If I were one of the unionized carpenters, plumbers, or electricians that lost work to the union firefighters working their side jobs without a union card, I think I'd have a pretty good case that they were scabbing the trade job.

There are a lot of innacurate facts being publicized by both sides of the IAFF two-hatter issue, too.

I maintain that if the IAFC has chiefs that are affected by either side off the IAFF's position on two-hatters, they have an absolute right for their organization to determine and publish an opinion on the matter.

In fact, it's not just a "Labor Thing". It's a Volunteer Thing, it's a Management Thing, it's a Community Protection Thing, and it's a Personal Rights Thing as well.