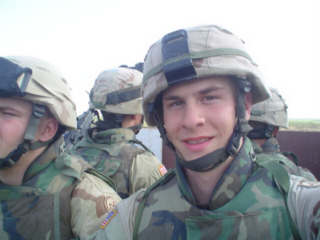 Today is April 6th, 2009. In another 5 days, it will have been 5 years since one of my best friends was killed in action in Sammara, Iraq. His name is Nathan P. Brown and he was one of the best men I've ever known. He was the type of friend that, though he may have not had much at the time, he woud give it all if you needed it. It's been hard for me and my circle of friends that were close to Nate. Every day I feel the loss of a brother that was taken away from me so early in his life, too early. Nate was loved by everyone who knew him and he still is. The love for him and the loss of him shook the lives of everyone that had the honor and privilege of knowing him. I was unable to come home for his funeral, as I was in the Army as well and could not take leave at that time. My family kept me up to date though, sending me all of the newspaper articles relating to him. I remember hearing about the procession leading him from Glens Falls to the Gerald Solomon National Cemetary in Saratoga being a couple miles long. I was told of kids coming out of class to stand on their school lawns, all waving American Flags and holding up signs, as the procession passed. Our best friends Rob and Joe unable to complete their speeches at the services held and having their picture taken, holding each other in tears. Just thinking about all of this and typing it has me a little choked up right now. Nate joined the Army after I did, though I always remember him wanting to join the Marines. Nate went to Iraq before I did, at the time I didn't know what to think. I didn't want anyone I knew going over there. To this day I've been haunted by the thought of "Why was it him, not me?" and feeling like if I was given the chance, I would gladly have taken his place. I have trouble with this. I saw some crazy things during my tour, but none of them have troubled me nearly as much as the loss of Nate. I wasn't there, I don't know exactly what happened, I wasn't able to be at his services. All I can do now is visit the place where many heroes have been layed to rest, spend time there in the company of our shared friends and family, leave something at the site and say a prayer for him. I know he is "up there" keeping protective watch over the ones he loves. I know that I'll see him again one day.
In Loving Memory of Nathan Patrick Brown

Sorry for your loss.

Comment by Britany Bristol on April 6, 2009 at 10:23pm
Eric,
it is very sad that out of the couple of years I have known you and being a friend that I have never said thank you, and that it takes this article for it to sink in to me. Thank you for your service and your sacrifices. No one can even think of understanding what you went through and what you are going through now, unless they have expirienced the same. I am sorry for your loss, may he rest in peace. Thank you Eric, and thank you to all of our soldiers.

Comment by Bill Claus on April 6, 2009 at 12:48pm
Eric,
I'm sorry to hear of your loss. It's never easy losing a friend or loved one. Keep the faith brother, you're in my prayers.