In a conference call from Port-au-Prince on Monday, specialists from the Fairfax and Los Angeles County Urban Search and Rescue (USAR) teams fielded questions related to their response and rescue efforts following the massive earthquake that struck Haiti on Jan. 12. Participants on the call—a special briefing for publications that serve the fire, EMS and emergency management communities—included four members of VA-TF1, two members of LA-TF2 as well as a government representative from FEMA.

In an opening statement, teams described their deployment as “textbook,” noting that Fairfax arrived first, followed by Los Angeles County, and immediately went to work conducting recon and search-and-rescue operations. Now, however, they’re preparing to move into the next phase of operations, recovery, but they must wait until the government of Haiti notifies them when to cease search-and-rescue activities. 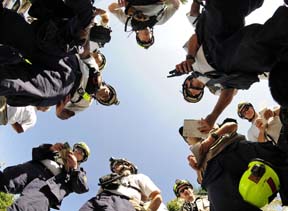 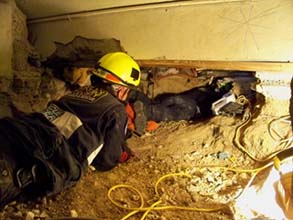 As for whether they expect to find additional survivors, one rescuer noted that, “hope always remains,” but at this point, it really depends on whether the trapped individuals have access to water. If not, “their chances aren’t good.”

A Fairfax rescuer added that the media tends to focus on 14 as the number of days someone can survive when entrapped. However, he clarified that this number is generous, as the vast majority of survivors are rescued within the first 7 or 8 days. Other important considerations: whether serious injuries have been sustained and whether ample void space exists. “That really drives our operations—trying to find the void spaces,” noted one rescuer. And unfortunately, the longer it takes rescuers to reach victims, the greater the likelihood that the injuries will be more severe.

As for the health of the rescuers themselves, they seem to be holding up well. “All injuries were minor and dealt with by our medical teams,” said one Fairfax rescuer. Dehydration was an issue they closely monitored, especially at first, but most rescuers climatized quickly.

One LA-TF2 rescuer explained that due to the nature of the construction in Haiti—mostly concrete and masonry structures—it takes extensive effort to search them all. In fact, when the teams first arrived, they spent the first couple days simply driving the streets, conducting recon by vehicle. They would look for people actively digging—people who would know the location of a trapped victim—and start there. Additionally, locals would approach the USAR teams, indicating that they knew the location of an individual or individuals, and lead them to the site. He added that it wasn’t until day 3 or 4 that teams really began more “traditional” forms of search and rescue, using the canines, as well as light detectors and other forms of technology they’re accustomed to.

As for communications, teams have been using multiple forms of communication devices, including satellite phones, in-country cell phones and portable radios. However, there is no shared communications system, making coordinating an international response even more challenging. Despite these issues, however, rescuers explained how nice it is to see teams from different countries working side by side every day.

Some of the most significant challenges include the language barrier and transportation issues. “We need to have interpreters out with us. Our drivers are locals—they know their way around and they can act as our interpreters,” noted one rescuer, who added that “the roads themselves are not in a condition that we’re used to, and traffic is a nightmare. The country did not have the infrastructure to clean those out, which made transportation difficult.” Also, most teams didn’t bring vehicles with them, so the vehicles they do have access to are hot commodities. “We’re all vying for the same vehicles. Once teams go out, we’re keeping them out.”

An added challenge: Some businesses have reopened, creating additional traffic in heavily damaged areas. One rescuer noted that although teams are extremely happy to see commerce return to the area—“it’s a sign that recovery has begun”—they are concerned with the potential for secondary collapse and additional entrapment.

Teams also noted that they will be leaving behind as much of their caches as possible. “Everything we think they can use, we’re going to leave behind for them—a standard humanitarian thing we do,” explained one rescuer.

Part of the cache that will be left behind includes three large tents and one small tent that teams set up at a children’s hospital in Port-au-Prince. Specifically, a rescue team checking in on the hospital, a large compound-like facility, was looking for survivors and found an active section of the hospital where surgeries were being conducted in the open. “After we determined that there were no survivors in the collapsed portion of the hospital, we set up three large tents and one small tent, and then went through the hospital and collected medical beds and cribs and hundreds of thousands of dollars worth of medicine.” He continued: “This made a significant impact on what they’re doing—a really positive thing outside of our USAR duties. Humanitarian work is a big part of what we do.”

What’s next for teams? “As soon as the government of Haiti say that are resources are no longer needed, we’re going to get home to our families,” noted one rescuer. Teams will also need to rest up and rebuild their caches as soon as possible, so they can be prepared for future deployments—a several-week-long process.