Get the Most Out of Every Acquired Structure

When was the last time your department conducted hands-on training at an acquired structure? Was the training worthwhile? 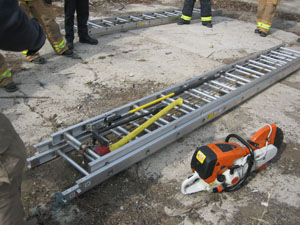 Some of the items we were able to train on using one of our acquired structures were tool packaging (above) and roof ventilation (below). 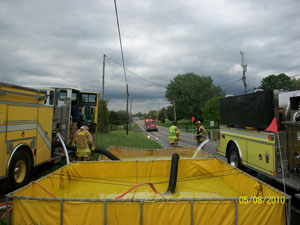 During our exterior attack training, our main objectives was to provide extensive pump operations, drafting operations and water shuttle operations to our members and members of surrounding departments. 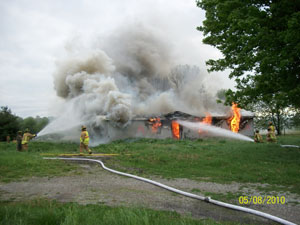 On burn day during our exterior attack training, we had five tankers dumping water into portable ponds, which were pumped to one master stream and three handlines. Without the full complement of mutual-aid tankers, we were still able to flow 750 gpm for 1½ hours. 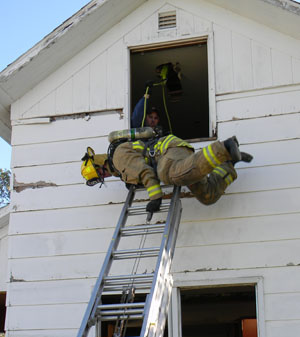 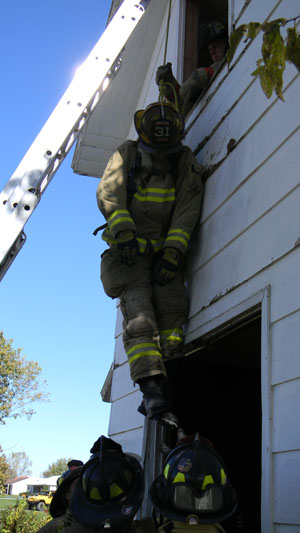 During our firefighter survival class, we covered a high anchor lowering drill. 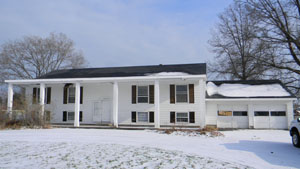 For our search-and-rescue training, we were fortunate to have a two-story “mini-mansion” (above) with a full basement and large 50' x 30' room in the rear (below). 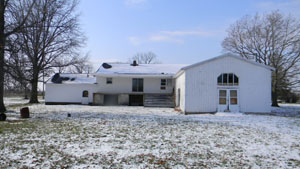 Although my department wasn’t able to conduct an interior-attack class due to issues with the structural integrity of the buildings, we were able to provide great opportunities for training on pump operations, water supply issues, truck operations, firefighter survival, mayday operations and search and rescue techniques. Through this training, we took great strides toward improving teamwork and efficiency, all by pushing each other through realistic and hardcore training evolutions.

Following are some tips for acquiring a structure to use in training:
• Make it known publically that your department is looking for structures to use in training.
• Know your jurisdiction. Some property owners are looking for a way to demolish an abandoned structure. You can provide the means, creating a win-win situation for both your department and the property owner.
• Ask your local building official to keep you informed of potential demolitions.

How to Use an Acquired Structure
Once you acquire a structure, you need to know what to do with it. Following are examples of how my department used acquired structures for training last year. I hope it fuels some ideas for your own departments.

March 2010: Truck Company Operations
The structure we used for our truck company operations training was a single-story ranch-style house that had been abandoned by its owner. It created many challenges due to its condition and the fact that the property owner lived out of state. My best advice if you can’t meet face to face with a property owner: Determine a solid method of communication, whether it be e-mail or phone; ensure that required permission to train, deeds and insurance cancellation forms are notarized; and consult your legal advisors if questions arise.

After an initial walk-through, we determined that an interior-attack class could not be performed because parts of the floor were in total disrepair. However, all of the owner’s belongings were still in place. Following some difficult planning, we emptied the structure into a 40-yard roll-off dumpster.

It took some serious brainstorming, but we ended up being able to use this abandoned house for more than 2 days of training. Jamie Morlock of the Toledo Fire and Rescue Department came to town to give us a day of truck company “tricks of the trade.” Some of the topics covered: deploying ladders, tool packaging (photo 1), saw usage, vertical ventilation (photo 2) and forcible entry. Although some of these are common skills that our members have trained on before, this training allowed us the opportunity to practice them repeatedly and hear some pointers from an outside voice. For example, Morlock’s tips on tool packaging really showed that our small-town department faces some of the same decreased staffing levels as big cities that require firefighters to work smarter to remain efficient. By the end of training, we had thoroughly destroyed the structure’s roof, doors and interior. And when we were done with that, the structure was secured and weatherproofed.
May 2010: Exterior Attack with a Water Shuttle
The property owner of the ranch structure wanted it demolished by the cheapest means. We knew that we would ultimately burn the structure, hence the importance of securing and weatherproofing it 2 months earlier. This structure was in a hydranted area; however, because it was not structurally sound for interior attack, we decided to do an exterior attack class with a water shuttle.

Even with this type of burn, you must comply with NFPA 1403: Standard on Live Fire Training Evolutions, and seek a burn permit from the EPA. Our main objectives for this training: Provide extensive pump operations, drafting operations and water shuttle operations to our members and members of surrounding departments (photo 3).

Prior to burn day, we established a 2.1-mile water shuttle loop that would make for a realistic gauge of our capabilities. Then on burn day, we had five tankers dumping water into portable ponds, which were pumped to one master stream and three handlines. Without the full complement of mutual-aid tankers, we were still able to flow 750 gpm for 1½ hours (photo 4).

This training gave new firefighters the opportunity to run apparatus in a simulated but realistic scenario that plays out regularly in our non-hydranted areas. Each firefighter was required to lose a draft, switch to tank water and then regain a draft when more water arrived. We were also able to put officers in positions that required critical decision-making and communications in a rural fire scene scenario. Plus, the water supply officer had to monitor the roundtrip times of the tankers and communicate with command about the maximum capacity of the shuttle.

October 2010: Firefighter Survival
A two-story duplex was donated to our department for training purposes. The structure’s owner wanted it burned down, but just like the small ranch structure, we ran into some obstacles. There were high-voltage power lines in close proximity to side A of the structure (within 15 feet). I met with representatives from the local electric company, and they sternly advised us that there would be no way to protect the wires. We took their advice and decided not to conduct an interior attack class here; however, we did have an inspection completed and obtained an EPA burn permit that specified a burn location 200 feet from the power lines.

It had been about 2 years since our last firefighter survival class, and several new firefighters had never done any of the related drills, so we made that the training of choice for that structure. Instructors prepped the structure for a full-day firefighter survival class that included the following drills: the Denver drill, the John Nance drill, a basement rescue drill, a rope bailout drill (photo 5), a ladder bailout drill (photo 6), a high anchor lowering drill (photo 7) and a search maze drill. We rounded out the training by conducting simulated fireground operations that involved a mayday event.

I believe that every firefighter should be instructed on firefighter survival techniques. In addition, every fire officer should practice managing high-intensity mayday training scenarios. This training is some of the most valuable information your members will hopefully never need.

Immediately following the firefighter survival training, the firefighters removed the structure’s shingles in preparation for the burn—a task that provided additional training in throwing and climbing ladders and working from roofers. The owner of the structure supplied an operator, a bulldozer and an excavator to demolish the structure into a pile situated away from the power lines. Once the demolition was complete, several firefighters received several more hours of pump operations and master-stream deployment training.

December 2010: Search & Rescue
Another structure was donated to us with direction to have it burned by the end of 2011. This structure is a two-story mini-mansion with a full basement and large 50' x 30' room in the rear (photos 8 and 9). The property owner has been more than gracious to let us use this structure for the next year.

In early December, we conducted a 2-hour search and rescue training drill at this structure. First, we reviewed the basics of searching residential structures, while increasing speed and teamwork. Also of note, we conducted this training at night during below-freezing temperatures—something that produced more challenging but realistic conditions. We realized afterward that a basic scenario can still get the blood flowing and remind even the most seasoned veterans the importance of passing experience on to newer firefighters.

Since being given permission to train in the structure, we’ve also allowed the EHOVE Fire Academy to use this structure for search and rescue training, as we did the Erie County SWAT for tactical operations.

In the coming year, we will host the following trainings at this site: roof ventilation and structural collapse of the large room in the rear, firefighter survival training as well as interior fire attack on the remaining parts of the structure.

Conclusion
Hands-on training is what most firefighters desire and what every fire department should strive for when providing instruction. When training is both regular and realistic, it helps firefighters work as a powerful force on any fireground or emergency scene.

Don’t forget to keep costs in mind. In our training, our major expenses were in the form of personnel costs—paying part-time firefighters and overtime for off-duty full-time members. This expense was worth it because firefighters become better prepared, more efficient as individuals and as a team, and officers have a chance to see the firefighters’ capabilities. The actual set-up and instruction expenses were creatively kept to a minimum.

Fortunately, we still have the mini-mansion, and we have two additional structures to train on this year—and there may even be a fourth coming soon.

The bottom line for any department: Look for and use every acquired structure possible. Your operations will improve with each opportunity. And, of course, be safe!

Lieutenant Paul Hasenmeier has been a firefighter for the City of Huron (Ohio) Fire Division since 2000. He’s a paramedic, fire inspector, SCUBA diver and an instructor. He has an associate’s degree in fire science, is knowledgeable and experienced in numerous technical rescue disciplines, and is a member of Ohio’s Region 1 USAR team. Hasenmeier is a contributing author to multiple trade publications, and he has presented at FDIC, the New York Fire Chiefs Conference, the Ohio Fire Chiefs Conference, the Ohio Association for Pupil Transportation Conference, the Ohio State Firefighters Association Conference, Fire Rescue Canada, the Fire Department Safety Officers Conference and other regional and national training events. He can be reached at phas@bex.net.

Comment by Lt. R. Scott Goodwin on February 23, 2011 at 1:58pm
great opportunity for your area departments, thanks for sharing the tips and ideas!