The incident took place in Hollywood, Fla., located on the state’s east coast, between Fort Lauderdale and Miami. 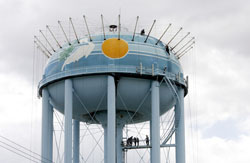 On Oct. 8, Florida firefighters responded to a water tank in which two workers had fallen and become injured.
Photo Sarah Dussault/Sun Sentinel 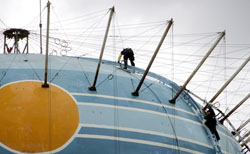 To reach the workers, the rescue team would have to climb a narrow
ladder approximately 120 feet up the tower to the gangway, walk across
the gangway and then scale another ladder that traveled approximately
165 feet around the curve of the bowl, which is 4½ stories tall and 78
feet wide.
Photo Carline Jean/Sun Sentinel 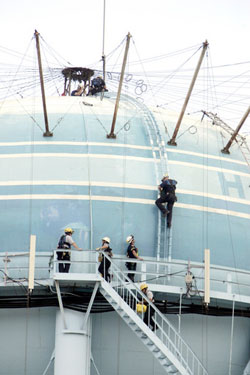 While climbing the tank, all rescuers wore Class III harnesses. The
first rescuer carried 200 feet of rope with an anchor strap and
carabiners. He anchored the strap and rope to the top of the gangway
rail as a safety.
Photo Sarah Dussault/Sun Sentinel 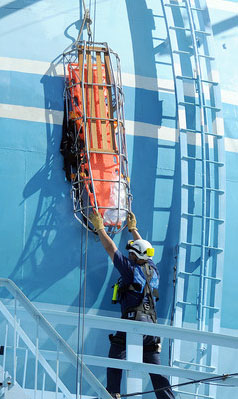 The first call to the Hollywood Police Department 911 Center reported a worker who had fallen inside a large water tower. At 1047 HRS, the City of Hollywood Fire and Rescue dispatched Rescue 40 and Engine 10. Shortly afterward, it dispatched Engine 31, Rescue 3, Rescue 231, Hazmat 231 and Technical Rescue Team 31.

When the first units arrived on scene, they met a worker standing outside the 160-foot-tall water tower. The worker said he didn’t know anything about any emergency, which puzzled the fire crews. They wondered if the accident was actually at the city water plant, so the Rescue 40 crew contacted the water department. The water department confirmed that the firefighters were at the correct location.

Crews soon learned that there were actually two workers inside the structure. The two workers, a 22-year-old and a 43-year-old, had finished sandblasting the tower’s interior and had started to paint it when one end of the swing-stage scaffold they were standing on apparently gave way, sending the men to the bottom of the tank.

As they started to fall, one of the men was able to quickly grab his cell phone. The men fell approximately 30 feet to the bottom of the tank. The worker with his cell phone managed to call a supervisor for the contractor, who was not at the site at the time. The supervisor called the water department, and a water department representative then called 911.

To reach the workers, the rescue team would have to climb a narrow ladder approximately 120 feet up the tower to the gangway, walk across the gangway and then scale another ladder that traveled approximately 165 feet around the curve of the bowl, which is 4½ stories tall and 78 feet wide. This second stage of the ascent would be particularly intimidating because the ladder begins as vertical, then curves into near horizontal orientation, with exposure on all sides.

The Hollywood firefighters immediately set up a recon team, donned gear and started their ascent. All rescuers wore Class III harnesses. The first rescuer carried 200 feet of rope with an anchor strap and carabiners. He anchored the strap and rope to the top of the gangway rail as a safety.

Once they made their way onto the gangway, rescuers opened an access port. They noticed that the tank’s interior was hot and smelled of chemical fumes, possibly paint vapors.

They made verbal contact with the 43-year-old worker. The workers were approximately 45 feet below the top of the tower. Patient #1 was lying in the center of the tank. Patient #2 was lying against a tank wall.

Rescuers had brought a gas monitor with them. Although the monitor indicated oxygen at normal limits, carbon monoxide at zero and no apparent explosive gases, the photoionization detector (PID) indicated a toxic atmosphere of 80 to 90 ppm, so firefighters began positive pressure ventilation at the opening of the gangway.

To access the workers, rescuers would have to initiate the rescue from the top of the tank, which had an 18-inch-wide opening in the center. They would then have to lower rescuers into the tank using a brake-bar rack with a Munter hitch safety. For hauling, they rigged a 5:1 mechanical advantage (MA) haul system with a change-of-direction pulley, along with a tandem Prusik belay.

It is important to note that during this rescue, the three departments—Hollywood, Broward County and Fort Lauderdale—established a unified command. The major positions for the rescue command system included command, forward ops, accountability, safety, rehabilitation and public information.

As the rescue proceeded, news of the operation made its way to the local media and eventually the cable news networks. Soon four helicopters were orbiting the area, creating a vibration in the tank. This, combined with winds sometimes gusting to 23 mph, added stress to an already complex scene. In one of the media videos of the rescue, one of the responders can be seen motioning to the helicopters to leave the area.

Rescuers knew that they would not be able to wear SCBA because of the tight spaces, so they needed supplied air. However, the supplied air hoses were a maximum of 300 feet long—not long enough to reach from the ground to the top of the tower and down inside. So rescuers put the air cart on a tower ladder and raised it more than 80 feet so the cables would be able to extend as needed.

During the operation, the toxic atmosphere reading fell to 15. This drop was likely due to the ventilation work at the gangway, but it also could have been related to the paint drying. Whatever the cause, it greatly simplified the operation, because it meant that rescuers no longer needed the supplied air.

The first rescuer lowered into the tank carried medical gear, including a LSP Half Back and a C-collar. Because of the small opening at the top, and the fact that the rigging high point was only 3½ feet above the tank, the patient would have to be brought to the top of the tank before being placed in a litter.

Patient #1, the more severely injured, was placed in the Half Back along with a C-collar, and then hauled out of the tank using the 5:1 MA haul system. Rescuers placed him on a Miller Board and then in a metal Stokes basket. They attached the litter to the rope with a pre-manufactured spider. A litter tender attached himself to the D-ring of the spider. The litter with patient and tender were lowered using the brake-bar rack with a with tandem Prusik belay. It was a challenge going over the edge of the tank because the litter tender had to maneuver the litter though the complex maze of poles and rigging that the workers had installed on the outside of the tank.

The second patient, with possible ankle and tibia/fibula fractures, was hauled to the top of the tank, where he was back-boarded and secured to a litter.

The first patient was out of the tank at 1508 HRS, and the second was out at 1554 HRS. Hollywood’s Rescue 74 and Rescue 40 transported the men to Hollywood Memorial Regional Hospital, a Level 1 trauma center.

Sources: City of Hollywood (Fla.) Fire and Rescue Captain Jeff Davidson, Lt. Brian White and Division Chief Mark Steele provided information for this report. Some additional details were taken from accounts of the incident by the Miami Herald and the South Florida Sun-Sentinel.

LESSONS LEARNED/LESSONS REINFORCED:
The operation was as about as challenging as it gets for a technical rescue. Not only was there a confined-space rescue, but also a high-angle rescue with rather intimidating exposure. In addition, there were the complications of darkness inside the tank, along with a persistent echo and layers of grit from the sandblasting.

The operation would have been even more complex had the rescuers needed to work on supplied air. This would have meant possibly four air hoses—for rescues and patients—in additional to ropes running through the 18" entry opening. This would of course create hose management problems in addition to rope management issues.

Despite all the challenges, rescuers from three jurisdictions were working together in a seamless operation. This was a result of the three departments having trained together for many hours, and having the same procedures and protocols.

One possible improvement: to better standardize equipment bags among the various departments. Although this was not a major problem, there was some variation in how the departments pack their equipment bags, and standardization could have streamlined things.

Although the media helicopters caused some difficulties for the operation, they could be useful in future operations. A video link to the command post could help provide a better view of the operation.

Also, make certain that hospitals know how to remove rescue gear, such as the Half Back, from patients without cutting it up.

Despite the tank having all the elements of a confined space, the injured workers had no ventilation, no monitoring, no attendant and no direct communication. The workers had harnesses, but they may not have properly anchored. OSHA is investigating.

Comment by Karsten Nelson on December 2, 2010 at 8:32am
Sounds like a rescue under less than ideal circumstances, with a response that was the result of excellent training. Is there any chance that someone took pictures of the anchoring systems and the high point change of direction? My service area has almost the exact same tower, and if pictures were available I would like to incorperate them into our pre-planning and training.