Like all large metropolitan fire departments, the New York City Fire Department (FDNY) has its share of career families—sons and daughters following their fathers into the department, brothers and cousins serving together, etc. But even so, Dec. 30, 2009, marked a first in the FDNY’s 145-year-history when it promoted a father and son on the same day, in the same class of 23 officers. 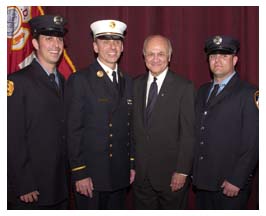 
Heavily Promoted Promotions
John (“Jack”) Mooney and his son Shane made history, although reluctantly. The FDNY press office had alerted the media of their joint promotion, and news outlets were in the audience that day. “It was definitely embarrassing,” Shane admits. “In the commissioner’s opening remarks, he said, ‘Welcome to the Jack and Shane Mooney show.’ It was embarrassing, but they did a nice job.”

Despite the attention, Shane says, “It was a great day. I mean, that’s a special day for everyone. We were promoted with a group of 23 guys, all based on merit.”

Jack agrees that the ceremony was a terrific experience. “It was my fifth promotion, so I’ve been through it before. But it was cool to be promoted with my son. I was very proud of him. He’s taken a big step—he’s gone from one of the men to lieutenant.”

As a new officer, Shane will go through 5 weeks of training before being assigned to a new division. Although he says he has no specific career goals, Shane adds, “I’m happy I got promoted. Not that my father ever put pressure on us [to get promoted], but you gotta go up.”

Jack was promoted to deputy assistant chief, working at the FDNY Fire Academy on Randall’s Island. “This is an awesome responsibility,” Jack says of his new position. “All the training for all the [FDNY firefighters] goes through here.”

All in the Family
The Mooney family connection to the FDNY is deeper than a father and son: Shane’s brother Scott is a firefighter at Truck 58 in the Bronx. Their maternal grandfather and uncle also worked for the FDNY. “I don’t think my mother has been alive a day in her life without a member of her immediate family going to work in the FDNY,” Shane says.

Shane says he always knew he would join that brotherhood. “I wanted to be a firefighter from the time I was probably 5 or 6,” he recalls. “You just grow up knowing it. And it’s not like [my dad, grandfather and uncle] were big talkers—I almost didn’t know the difference between a truck or an engine when I first started.”

Asked how he felt about his sons becoming firefighters, Jack says he “had no reservations,” explaining, “They both went to college, and they were both schoolteachers before they [joined the FDNY]. My father-in-law, who was a deputy chief [with the department] when he retired, used to encourage all the kids in the neighborhood to take the civil service exam, just in case. So both [Shane and Scott] did, and eventually they got the call.”

Jack adds, “It’s a good job” working for the FDNY. “It has its dangerous side, but it’s an excellent job. I’m glad they did it.”

Jane Jerrard lives in Chicago and writes regularly for FireRescue.

Comment by vernon e. sankbeil on January 31, 2010 at 7:56pm
THE COOLEST IS TO HAVE FATHER AND SON OR DAUGHTER ON THE JOB TOGETHER ALSOME STORY, I WORK WITH A FATHER AND SON