If so how do you know? We already know the overall economic impact of work-related injuries and illness are high in the fire service and is ranked as one of the most hazardous occupation. Unfortunately many programs have not been around long enough to provide any evidence. Worse yet, some programs are unable to collect any data due to limited resources.

A few years ago I was asked to break down the worker compensation numbers of an Fire Dept consisting of 800 firefighters. Risk management wanted to justify not only the cost of hiring a full time strength and conditioning specialist but also to discover if the program actually worked. During that time we discovered the following:

• We averaged 91 injuries per year prior to my arrival, then in the first 5 years working full time we averaged 90. Let’s be honest this is not a huge savings but again firefighting is a difficult job and injuries will happen.

• Average claim per injury did not change before hiring a full time coach, but over the 1st 5 years we did see a reduction of $629 per claim per year. This was an average savings of roughly $57,000 per year (not including increase medical costs).

Fast forward today, recently I had to analyze our numbers again to ensure our program was heading in the right direction. Here is what we discovered.

• Total injury costs have been steadily declining: From $1.2 million down to $740,000 in the past 5 years.
• Average Injury Rate is currently 84 - down from 91 the previous time we analyzed our numbers. The last two fiscal periods have been averaging 72 (peak at 104)

Now the big question! According to research exercise causes the most injuries in the fire service, but the researchers did a follow up and discovered that although “1/3 of injuries are due to exercise, they still reduced the severity of the injuries on the fire ground”(1). Our numbers actually show this as well but with a few differences

• Over the past 5 years: the average injury rate per year was 17. The highest being 23 and the lowest being 10 (and everyone does exercise in some manner).

• The average claim due to exercise is still lower ($4,716) than an injury occurring while performing job specific tasks ($10,000). Our lowest year per claim based on exercise was $647!!!! Of course there were some outliers that increased the cost but overall we can still see the benefits.

If we were to compare the research to our current numbers within our organization exercise equaled about 20%. With that being said, “Having no exercise would make it worse due to the severity of injuries that would occur without a health & wellness program.”

The next question to answer was “what type of exercise cost the most?” Within our organization, RUNNING cost the most per injury; more specifically running on a treadmill. We broke up our analysis to include: Basic Weightlifting, High Intensity power training / Circuits, Cardio

Although, basic lifting had a high injury rate the overall cost was significantly lower than the other two categories. According to our numbers for every injury associated with High Intensity Power Training was equal to 3 injuries during basic lifting. In other words the severity associated with this type of training is much greater.

Finally, we looked at total injuries by body part, and of course back injuries were the highest. We average about 30 Low Back Injuries per year, Ave Cost per year is roughly $400,000 and average claim per year is rough $10,000

Third were knees, then foot, and finally ankle.

BUT we did see a decrease in low back injuries, total cost and average per claim each year. 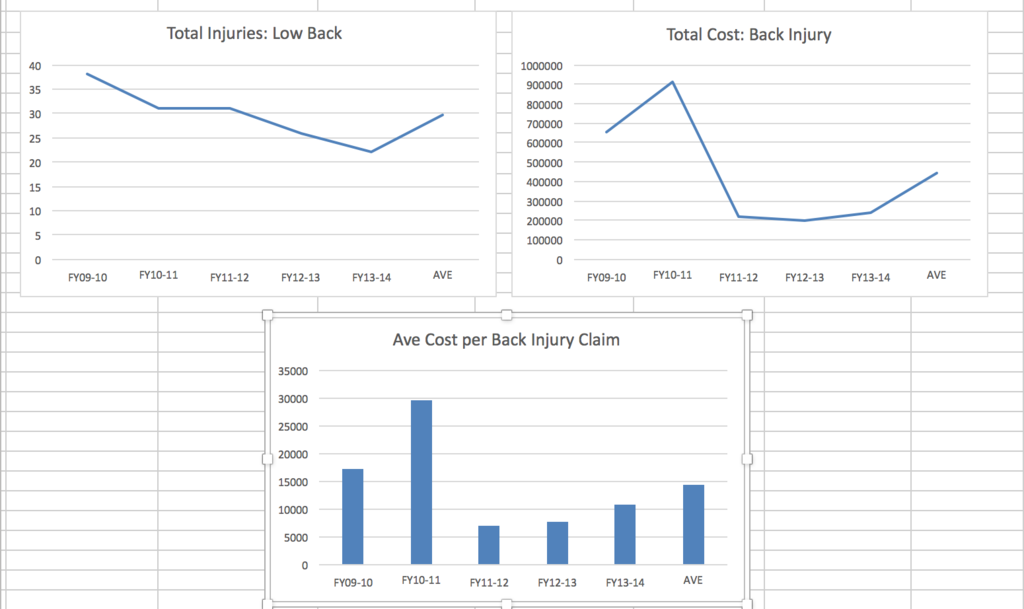 Again, injuries will happen within the fire service, but it is very clear that exercise does provide savings. As you can tell from these numbers the benefit of hiring a full time strength & conditioning professional is worth its weight in gold and will pay for itself.

Why? according to Dr McGill a program should focus on improving movement quality (aka coaching) vs just fitness based. In his study (unpublished yet as of this writing) he took two groups of firefighters: Coaching group & fitness based group. The fitness group were told to do whatever they wanted - whether that be a workout from the internet or some other means and perform it as they see fit, the other group (coaching) were provided specific exercises to help them perform better on the job as well as how to perform the exercise properly. What he discovered was that the coaching group were able to perform better on the fire ground due to better movement patterns and muscle memory, the other group did not - this could be attributed to bad movement + bad fitness = bad stuff!

In other words, the idea of having a professional to help develop and implement a health, wellness, and injury prevention program has merit and could be very beneficial to both the firefighter and department. In my honest opinion this concept should be taken seriously, especially with cost saving associated with it. Let’s take care of our greatest asset - the firefighters!

If you are interested in knowing about our program or how to develop your own health & wellness program check out our webpage Southern California University Health Systems - Tactical Sports Med...