Taken from my response to Asbestos incidents on the forums. The firefighter safety section isn't viewed nor responded to enough so I figured the exposure on the blogs would assist in more people reading the information.

Asbestos, the almighty cancer causing bad crap. They have asbestos insulation, siding and a variety of other nasty stuff. Asbestos is a nasty creation that has caused numerous cases of Mesothelioma in people who have had very little exposure as well as those who have had a lot of exposure. Asbestos (when viewed under a microscope) is unlike fiberglass. Fiberglass strands are straight. They do some damage to tissue and the lungs if proper protection isn't used. Asbestos is shaped more like a fishing hook and it embeds into the soft tissue of your lungs and thorax systems.

Here is a website which shows exposure routes (most common)

Asbestos pipe insulation. Note that it is wrapped in fiberglass. (without resin) The elbows will have a look that appears more like plaster used on walls.

Note the cooregated material. This is used on roofing applications and is asbestos.

In this picture you will note the house has asbestos siding. Note the missing tile. These tiles are generally around 2 feet wide and to Hellen Keller would appear as wood shingles. These shingles can be flat on bottom OR could appear as though they have a wave type pattern on bottom. These shatter easily with little impact.

My grandfather died from Mesothelioma. (lung cancer) His was caused by working in a textile mill which was riddled with Asbestos. No matter how much of it was covered with the fiberglass, he was exposed to the general break down and bumping of the pipes with lifts, towing trucks (for the boxes of fabris) the roof leaking (causing degeneration of the insulation barrier) and working on the sprinkler system. (yes some of it was insulated with asbestos)

Rule number 1. If it doesn't appear to have a broken barrier, LEAVE IT ALONE!!! DON'T direct hose streams onto asbestos wrapped pipes if you can do so.
Rule number 2. Treat it like a hazardous material that it is. Don't be next to it, don't disrupt it, and don't stand in it if it has fallen.
Rule number 3. If you have been contaminated, a automatic gross decon should be done WITH a brush down to hopefully grab as many of the particulates as possible. This should only be done by personnel in a minimum of a tyvek suit with SCBA (taped off) and boots and gloves on. (all rubber) The tyvek suit would get thrown away and the rest (being rubber) would be easily cleaned. I would NOT wear the other PPE that was grossly deconned until it was given a chance to be bagged and sent to be fully cleaned by a professional gear company. (the particles are bad stuff and will embed in your turnout until fully cleaned)

Asbestos siding, and asbestos on roofing applications is also something which is common to find on the fire scene. If at all possible before starting the saw to make a cut, use a flathead ax OR a sledgehammer end and break the siding/roofing material up. This will cause a lot less fibers to go airborn. Using the saw you will create a fine powder and it will go airborn much more readily.

All is not lost but always ensure you CYA. (cover your ass!!) Fill out exposure reports for ANY and ALL personnel involved at ANY incident involving asbestos. This will make sure that ANY of the firefighters on scene exposed to asbestos would be covered by their insurance should Mesothelioma start showing up down the road.

Comment by Engineco913 on November 2, 2008 at 9:55pm
Thats pretty much standard form. Most contractors will cover them with fiberglass and then plastic with a good dose of Duct Tape. Before you know it your 1 and 1/2" pipe is about 12" in diameter with all the insulation.

Comment by Kimberly A Bownas on November 2, 2008 at 3:25pm
You are right Lutan. The first thing we do is just through our gear in the back of our vehicle and don't even think about what is on that gear. This is scary stuff and we sometimes get lacks about what we are dealing with when it isn't obvious to us. Education, education, education, we have to keep learning. Nice post Mike.... 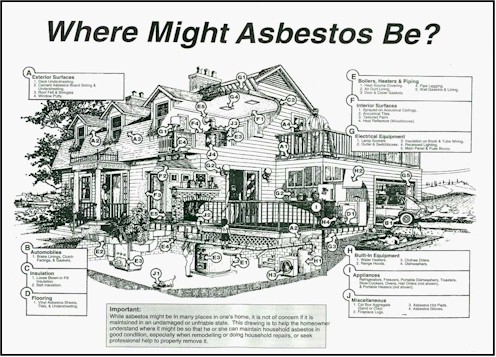 Copy the picture above and open it up and enlarge it- it's a good indication of common areas around your house where asbestos could be found.

Asbestos is one of those hidden hazards as you often don't realise you're exposed to it. It scares me even more to see the kids wearing our PPE or seeing members finish at a scene and throw the contaminated gear in the back of the family car, etc.