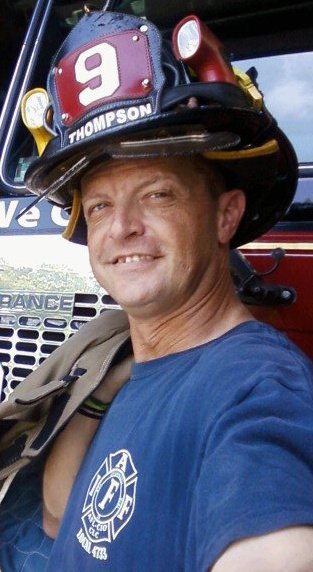 Years in Fire/EMS:
over 8 years

Years With Department/Agency
Since April 2011....

About Me:
I'm just a layed back dude. I have 2 boys and a baby girl who are my LIFE. Heidi (my fiencee) makes it all come togetehr-. My crew has always come first , and I love the guys on the job. My life is devoted to my family , and to the greatest job on the planet.
" Suck it up!! "

Why I Joined Fire/EMS
I joined to make a difference. I've always been about helping people (I know it sounds like a canned answer , but it's true). And I've formed many friendships on the job along the way. It's the greatest job on Earth.

Why I Love Fire/EMS
I feel like I'm making a difference..you don't just go to work , punch the clock , and go home...in THIS job , you TRULY make a difference.

Top Issues Facing Responders:
Obviously blood borne pathogens is a major issue , but I think the way things are going in today's world , we need to be more aware and ready for biological type responses.

I just wanted to take a second and wish everyone a safe and Very Merry Christmas , and a Happy New Year!!

-Let's be careful out there ;)

Firefighters battle a blaze - at their own firehouse in Harlem.

A blaze broke out inside a Manhattanville firehouse Friday, injuring eight firefighters, including a chief.


The two-alarm fire, which began around 8 p.m., sparked on a landing between the second and third floors of Engine 80 and… Continue

Rick K. said…
well thats bad enough!!! could of been a lot worse! stay safe and enjoy your time off till monday!

Tony Tricarico said…
Retired life is good, it's not the job, but it's good. Still doing training and traveling. Glad the knee is holding out. Hope all else is well, looking forward to doing some training with you guys. Talk to you soon

CW said…
Hey Whts goin On??? Seen tht Ur Blazers Beat Up on Detroit!!! Also Keep Us posted on the crew/ news frm N.Y.C. if U hear n e thing else about them

Tony Tricarico said…
Thank you again for your thoughts and prayers.

Paul said…
Hey Troy,
Thanks. Its always comforting to know that our extended family is there to support us. Stay Safe!

Micheal Dorsey said…
thanks for the add, go carolina! funny thing, im on the list for charlotte fire

Tony Tricarico said…
Thank you for your thoughts and prayers. We will be there in support of his family.
Stay safe
Tony