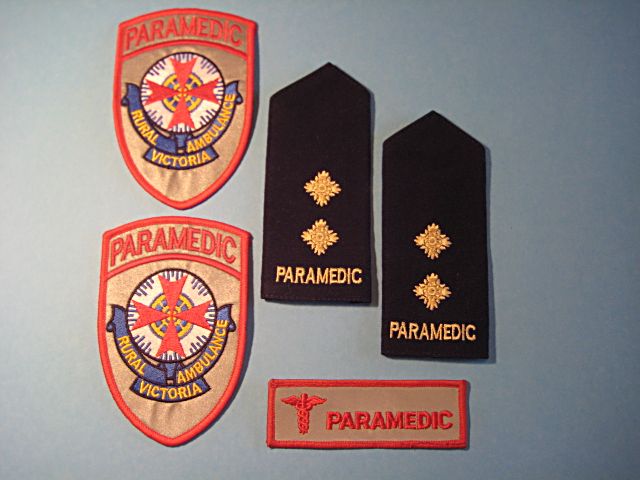 Welcome from Down Under

Other Past or Current Departments and Organizations
The SES as mentioned is locally responsible for Road Crash Rescue; Land Search; Boating Search; Flood and Storm damage and recovery.
Very few Fire Services out side Metropolitan Melbourne carry out Road Crash Rescues in this state.
Its different over here where Fire Services are not combined in all rescues as it is in the USA. The Fire Service; Ambulance Services; Police and State Emergency Service are separate identities, but at the end of the day they work well together.

My Training:
Good Heavens where do I start: I have always had the sight to help as a young boy of 17 I joined St John Ambulance, (a well known volunteer organisation around the world) There I have given some 27yrs broken service to them and the community. At 18 I was a volunteer FireFighter with the Noble Park Fire Brigade. So both of these took up most of my time as a youth; Not Boring U yet??
At 25 I joined the Ambulance Service Victoria (Peninsula) and the rest is history.
This work became to involved and I gave the FireFighting away, but there will aways be a Light there for every FireFighter no matter where. 911 was a good example of where FireFighters past and present felt the sadness and related to the senseless of it it all.

About Me:
Yes I am married still to my first wife, ( I hope I do not have to explain that) I am a Justice of the Peace for the State of Victoria. I Like to collect shoulder Patches/Service Badges from all over the world, so feel free to contact me and send as many as U like.
I Became O.I.C. of the Traralgon Ambulance Station 1989. Involved in Paramedic challenges Vs other Paramedics. Lectured at Monash University for Paramedic Students. Involved in Training of new students paramedics. Managed a First Aid department for the Ambulance Service where FA courses were taught to the general public and Companies. Return to on the Road work, injured my back severally and now work full time in our 000 (911) Communication Centre.
I am a World accredited Medical Assessor for Road Crash Rescue. In July 2008 traveled to Wales (UK) and assessed 30 teams in 3 days.
I don't seam to have much time for the outdoors anymore, anyway the days of lying on the ground staring at the stars are over thanks to my back injury.

Why I Joined Fire/EMS
Was a volunteer firefighter, then had an inkling to join the emergency services. I then joined Ambulance Service Victoria. I was stationed at Dandenong outside of Melbourne then moved to my present address in regional country Victoria in 1986.
From there on the story grows bigger and bigger, It a life I wouldn't change for the world.

Why I Love Fire/EMS
self satifaction, The spark it puts in my life.

Top Issues Facing Responders:
Like most emergency services; We the Worker are our own worst enemy when it comes to recognition of of our work in the public eye.
Non recognition of staff by non operational senior management.
Wages will always be an issue, never enough.

A woman has died after being stabbed and then set alight at a Melbourne petrol station where her alleged attacker told frantic bystanders to "let her burn".

The 42-year-old Bayswater North woman had been airlifted to The Alfred hospital on Tuesday morning in a critical condition with burns to almost 100 per cent of her body, as well as stab wounds.

She died early on Tuesday evening.

After attacking the woman at the service…

Firefighters called to a blaze inside a Melbourne jail say they have been confronted by the chaotic scene of prisoners, who should have been locked down, wandering about the burning prison wing.

Eight prisoners and one prison officer suffered injuries ranging from smoke inhalation to burnt windpipes from the fire inside the Charlotte wing of the Port Phillip Prison at Truganina about 10pm (AEST) on Saturday.

The wife of an Australia Capital Territory (ACT) [Canberra] firefighter who died in Victoria on Tuesday says he was repaying a debt to those who helped fight the 2003 Canberra bushfires.
David Balfour, 47, from Gilmore in the ACT, was killed by a large tree branch while connecting a hose to his strike team's tanker in the Victoria Fire at Yarra Ranges National Park.
A professional firefighter of 10 years' service with the ACT Fire Brigade, Mr Balfour was part of a team of 120 Canberra… Continue

While I was in England touring the UK, my squad on July 24, 2008 attended a Bus Vs Truck incident on the Princes Highway just before 11:00am. Where a bus ran into the back of a heavy haulage truck,
The BUS driver and one of his passengers were fighting for their lives after their bus collided with a semi-trailer on a major Victorian highway west of Traralgon.
The force of the crash obliterated the front of the bus,… Continue

Hi Leo,,,,sorry I didn't get back to you earlier,,,I will a set of DuPont Fire Rescue and Munford Fire Dept patches to you in the mail tomorrow!

Good day! I am a collector from Ukraine. I suggest you to exchange patches.

Rosemary Nord said…
Hi, I have to confess, that I haven't really been involved with this FFN website at all since I joined almost a year ago! I just signed in again, and see that I told you that I would send you some patches. WOW! some 'friend' I am. I haven't shown to be very good at follow through here! I am actually about to have surgery on my right big toe. I am off duty now and will be back to duty after the surgery and some physical therapy! Stay safe!

johnnie w. specht said…
hey leo i dont have any emergency patches yet.

Izzy ( J. Bade) said…
hey Leo, its been ages since I've been on here. too much going on around here. was thinking about you while seeing all the devastation down there. how ya been? hopefully it hasn't been too bad for ya. be safe out there, and when you get a moment, drop a note.

john holtan said…
Thanks Leo for the message. I don't have any patches at this time. I am just getting my new business up and running. I am the inventor of the Gas Monitor Simulator. If you have an iPod touch iPhone or iPad please download the app at http://itunes.apple.com/us/app/gas-monitor-simulator/id362628351?mt=8 and I will then unlock your device so you can try it out.

Hope to talk to you soon.
John Holtan
Be safe!

Elijah Davis said…
did you get the patch I sent

Andrew(Skinny) Lingard said…
Leo, our Donkey is still AWOL, have you seen him about Vic or walkabout creek

Are you interested in swapping patches. Email me at kentheg@yahoo.com if you want to trade.

Edmund Ford Power 3rd said…
I don't know anything about Australia, but does it get snow or aything? and how is it over there?

Arron said…
Same goes Leo, Looks like im not the only one who has been getting stuffed around. If you didnt want the one I sent you, then send it back. Just so you know Im going to add a few comments to the patch trading groups to warn other traders about this, its not fair, its stealing. If there is a legitimate reason you havent kept to your end ot the trade all you had to do was let us know. The fact that you dont get back to us and when you do you make empty promises, thats what looks bad. Come on, keep to your end ot the trade.

RON aka "LUCKY" said…
what’s the deal here, summers almost over ! ! ,, I sent you my stuff months ago and haven't received the 1 (ONE) thing I asked for and you said you were gonna send in return ,,,, Am I getting stiffed or are your really just a slack-ass ? ? You’ve put a sad twist on a time honored firefighter hobby, trading patches ,,,, I will never with anyone on this site again ,,,, If you don’t want or appreciate what I sent, feel free to return them ,,,,

That's excellent! I am slightly busy this upcoming week between class and duty, However, I will get the patch out to you as soon as possible!!!

Arron said…
Hey Leo,
Whats going on mate, I havent heard from you for ages. Its now been two and a half months since I sent you those patches and now your not getting back to me???
Come on mate, be fair about it - I have given you the benefit of the doubt until now.
Arron

Dont mean to be a pest, have you sent that patch yet. Just havent heard from you in a while.
Hope all is good mate,
Arron

Ashley said…
Hello Leo, would you be interested in trading patches...I'm from North Carolina..USA...

carlitos said…
hi Leo!!! well, thanks for your words of welcome pal... and regarding to your request for patches, let me tell you that I've been training in mountain rescue at Italy and France last year, and have patches from them That I'm gonna try to send you, and of course, my own unit's patch!!
Look forward of being able to visit Australia someday.... and let's share some beers and a lot of stories!!

Otakar Lukac said…
Thanks Leo, we do have in my fire station the largest Fire Patch collection in the country, from all over the world, feel free to send us yours also to:
Comandante Otakar Lukac
Cia. Bomberos Salvadora Lima 10
Jr. Belen 1027
Lima 1
PeruThanks and best regards
Otakar