A SOCIAL afternoon for a group of Bendigo work colleagues ended with four women airlifted to hospital after their bus crashed and rolled at Maiden Gully.

Thirteen people were on board the 26-seater Bendigo Bus Co coach when it was involved in a collision with a black car on the Calder Highway just outside Bendigo shortly after 5pm.

Two women were pinned under the bus while other passengers were trapped inside.

Fourteen patients were transferred to Bendigo but two were airlifted to the Austin Hospital later in the night, one woman with multiple leg fractures and another with leg and back injuries.

Read the full article at: http://www.bendigoadvertiser.com.au/news/local/news/general/horror-... 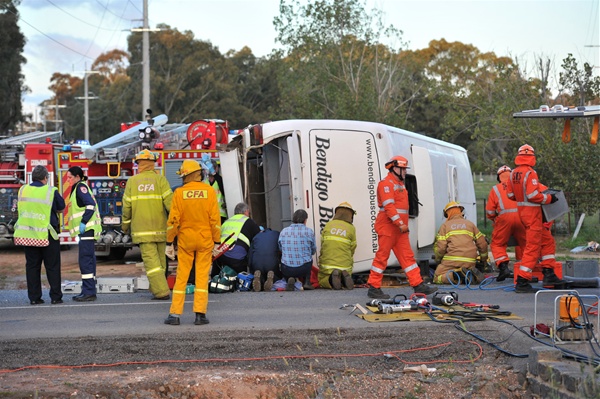 Two women aged 33 and 57 were flown from the scene and two Bendigo Health staff were later flown to Melbourne.

The hospital’s director of emergency medicine, Salomon Zolstein, said staff who responded to the emergency would be debriefed and offered ongoing support.

“Many of the passengers on the bus were staff at our hospital, our friends and colleagues,” he said.

Read the full article at: http://www.bendigoadvertiser.com.au/news/local/news/general/health-...

A SERIOUS bus crash at Maiden Gully on Saturday has renewed calls for seat belts to be mandatory on buses.

It’s unclear whether 13 women on board the bus that rolled on Saturday were wearing seat belts or whether the bus was fitted with restraints.

Leon Hain has been involved in seat belt campaigns for more than 25 years and said it was hypocritical for the government to celebrate  40 years of mandatory seat belts in cars when buses were still missing out. “The law says everyone shall have and wear a seat belt where available... but all buses have them,” he said.

“In Victoria 75,000 schoolchildren travel on country buses travelling up to 100kmh – for goodness sake, make them mandatory.”

Mr Hain said legislation introduced in December 1992 made it compulsory for buses built from 1995 to be fitted with seat belt restraints.

Read the full article at: http://www.bendigoadvertiser.com.au/news/local/news/general/change-...