For now, I will list using photographs, the various drugs used by Fire Department Toxmedics. As time permits, I will add what each drug does and help justify why every fire department in the USA should have their paramedics trained to do Advanced Hazmat Life Support.
Please feel free to comment on any of the drugs, and if possible, help me label these drugs and any pertinent information about them.
Stay safe,
CBz
Toxmedic Drug Box

Use of these numbered tags enables a time savings regarding inventorying. 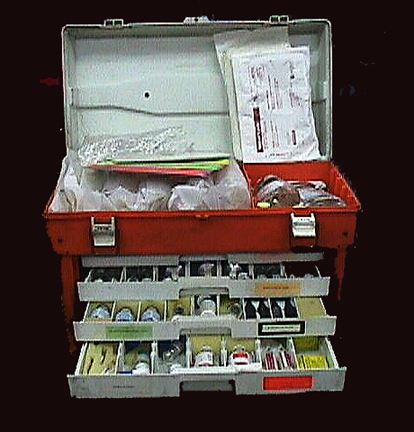 What I thought was cool about the setup was the color coding. Each color stands for a specific 'functional' group.

The cards are set up to enable the Fire Paramedics in the field to clearly communicate with the emergency room what they are dealing with. The corresponding drugs are all color coded as well.

Both description and treatment protocols are provided on the card.

Permalink Reply by Ben Waller on April 3, 2010 at 12:45am
CBz, no Duodote (Atropine/Protopam autoinjector) or Calgonate (Calcium Gluconate gel)?

Permalink Reply by Mike Schlags (Captain Busy) Retd on April 3, 2010 at 1:55am
I know we have discussed this before, but seeing the numbers of people who joined this group gives me hope for some changes regarding toxmedics and AHLS for fire departments nationally. Not having this even being close to a reality in the state of California, one has to go to one of the more progressive states... I'm hoping that this is a good place to make a national call to get everyone this level of pre-hospital care. It's cool to do the hazmat thing, but it's not cool to get exposed and not have the right antidote on hand in conjunction with your fire department paramedics AND emergency room folks working hand in hand. Your life may and probably will depend on it if you are exposed.

These photos are old, admittedly, and what was used at this time was calcium gluconate and ky jelly. Sounds like now, they combined the two... and the duodote, I understand the concept but was not familiar with a combi drug. More great stuff Ben. Thanks.

Permalink Reply by Ben Waller on April 3, 2010 at 9:10pm
CBz, we have both of the above - 100 doses of DuoDote in our HazTox box, along with four 25-gram tubes of Calgonate. We also carry Calgonate on our ambulances and in our HazCat kit in case we are working an unknown and get splattered with what turns out to be hydroflouric acid (HF).

Another new drug we're working on at the state level is Hydroycobalamine (Cyanokit) to replace our old Lilly Cyanide kits. This drug is a two-dose IV and doesn't require all of the setup and the Sodium Nitrite perls that the Lilly kit has. More importantly, Cyanokits can be administered for cyanide toxicity secondary to firefighting. The Lilly kits are contraindicated for smoke inhalation because it works by creating methemeglobin. When you have a patient who is already hypoxemic from smoke inhalation and add methemeglobin, you make the patient even more hypoxemic.

As you might expect, Cyanokits are expensive, and will remain so until they go off-patent and generic versions are available.

One other thing - we don't carry Inderal, because it is no longer on our state EMS Formulary due to the long half-life. Pure beta blockers like Inderal with long half lives can equal paramedic-induced deaths. Inderal is one of those drugs where the cure may be worse than the disease.

The DuoDote™ Auto-Injector (atropine 2.1 mg/0.7 mL and pralidoxime chloride 600 mg/2 mL) is indicated for the treatment of poisoning by organophosphorus nerve agents as well as organophosphorus insecticides.

The DuoDote Auto-Injector is intended as an initial treatment of the symptoms of organophosphorus insecticide or nerve agent poisonings; definitive medical care should be sought immediately. The DuoDote Auto-Injector should be administered by Emergency Medical Services personnel who have had adequate training in the recognition and treatment of nerve agent or insecticide intoxication.

Individuals should not rely solely upon agents such as atropine and pralidoxime to provide complete protection from chemical nerve agents and insecticide poisoning. Primary protection against exposure to chemical nerve agents and insecticide poisoning is the wearing of protective garments including masks designed specifically for this use. Evacuation and decontamination procedures should be undertaken as soon as possible. Medical Personnel assisting evacuated victims of nerve agent poisoning should avoid contaminating themselves by exposure to the victim's clothing.

In the presence of life-threatening poisoning by organophosphorus nerve agents or insecticides, there are no absolute contraindications to the use of the DuoDote Auto-Injector. When symptoms of poisoning are not severe, DuoDote Auto-Injector should be used with extreme caution in people with heart disease, arrhythmias, recent myocardial infarction, severe narrow angle glaucoma, pyloric stenosis, prostatic hypertrophy, significant renal insufficiency, chronic pulmonary disease, or hypersensitivity to any component of the product.

Cyanide poisoning must be seriously considered in victims of smoke inhalation from enclosed space fires; it is also a credible terrorism threat agent. The treatment of cyanide poisoning is empiric because laboratory confirmation can take hours or days. Empiric treatment requires a safe and effective antidote that can be rapidly administered by either out-of-hospital or emergency department personnel. Among several cyanide antidotes available, sodium thiosulfate and hydroxocobalamin have been proposed for use in these circumstances.

The evidence available to assess either sodium thiosulfate or hydroxocobalamin is incomplete. According to recent safety and efficacy studies in animals and human safety and uncontrolled efficacy studies, hydroxocobalamin seems to be an appropriate antidote for empiric treatment of smoke inhalation and other suspected cyanide poisoning victims in the out-of-hospital setting. Sodium thiosulfate can also be administered in the out-of-hospital setting. The efficacy of sodium thiosulfate is based on individual case studies, and there are contradictory conclusions about efficacy in animal models. The onset of antidotal action of sodium thiosulfate may be too slow for it to be the only cyanide antidote for emergency use.

Hydroxocobalamin is being developed for potential introduction in the United States and may represent a new option for emergency personnel in cases of suspected or confirmed cyanide poisoning in the out-of-hospital setting.

Prior to administration of CYANOKIT® Antidote, smoke-inhalation victims should be assessed for: exposure to fire or smoke in an enclosed area; presence of soot around the mouth, nose or oropharynx; altered mental status. Use caution in the management of patients with known anaphylactic reactions to hydroxocobalamin or cyanocobalamin. Allergic reactions may include: anaphylaxis, chest tightness, edema, urticaria, pruritus, dyspnea, and rash. Most common adverse reactions (>5%) are transient and include chromaturia (red-colored urine), erythema (skin redness), rash, increased blood pressure, nausea, headache, decreased lymphocyte percent, and injection site reactions. Usage may interfere with some clinical laboratory evaluations. If the decision is made to administer another antidote with CYANOKITÂ®, these drugs should not be administered in the same IV line. The safety of simultaneous administration has not been established.

Permalink Reply by Eric Dotten REMT-P,NCEE on October 4, 2010 at 6:58pm
Mike, the cyanokit is expensive but if you go cyanokit.com website there grant information available. The Cyanokit is the only approved FDA drug for Cyanide suspected and confirmed cases. The reason for the expense is the cost of the production of the drug and besides it like narcan for cyanide.

Permalink Reply by Ben Waller on June 5, 2011 at 10:57am
Actually, the Lilly kits (and similar kits from other vendors) still have FDA approval for cyanide cases.

Cyanokit is the only FDA-approved drug for cyanide cases due to smoke inhalation. Cyanokit acknowledges that the Lilly kits are still approved for non-smoke inhalation cyanide exposures.