Good day fellow photographers,
I have been asked to teach a class at our Annual Fire School on Fire Scene Photography. I would like to ask you the folks out in the field, your best ideas or thoughts that a "newbie" should know or think about while taking pictures.
I want to be able to show them that they can get good shots of various activities going on, not just the "doom and gloom" that seems to go on. Any ideas and thoughts would be appreciated and credit will be given to all that contribute.

Permalink Reply by WARD on May 12, 2010 at 2:00pm
Bill - I am kind of new at this Fire Fighting Photography. It would depend I guess if you are taking photos for pleasure or for official business/investigation purposes. I do it mostly for pleasure and to give the fire companies photos for their web sites.

However, I have learned that most firefighters like to see more than just a bunch of photos of fire trucks. I try to combine both. A lot of times during training or calls I will try to combine a truck with the firefighters in action within a photo. Even if it's just the cab or door of a truck, mostly to show the name of the fire company. This is good if the photos are for pleasure where outsiders see your photos. They can identify who is who. In the attached photo I added the command vehicle to the photo rather than just a photo of the house burning. Just seems to add something to the photo. (photo attached as sample) But yes, I also have photos of just trucks or burning buildings.

And if the photos are for pleasure or fire company web sites, don't let the firefighters kid you, they like to see photos of themselves in action. Which is nice to pass on a photo or two to the firefighters when you get a great shot of them in action.

I've also been on rescue calls where the chief will ask me to take certain photos of the door or roof cuts to use for training purpose. To show the cuts, where they were made on the vehicle or the wires in the door post and so on.

If you are taking photos for investigative or official photos, then you would have to think like a police officer doing an investigation, which leads to a completely different type of photo shooting. That can lead to photos of the flames and smoke, crowd, area of fire, and after fire photos.

I have found night photos to be tough, with all the flashing lights, spot lights, scene lights, and so forth. They tend to blur the photos with the glare.

Again, I am kind of new at the fire photo taking. I kind of learn as I go, and look at other fire photos to see what kind or the shots others take, to maybe give me a new idea for photos. 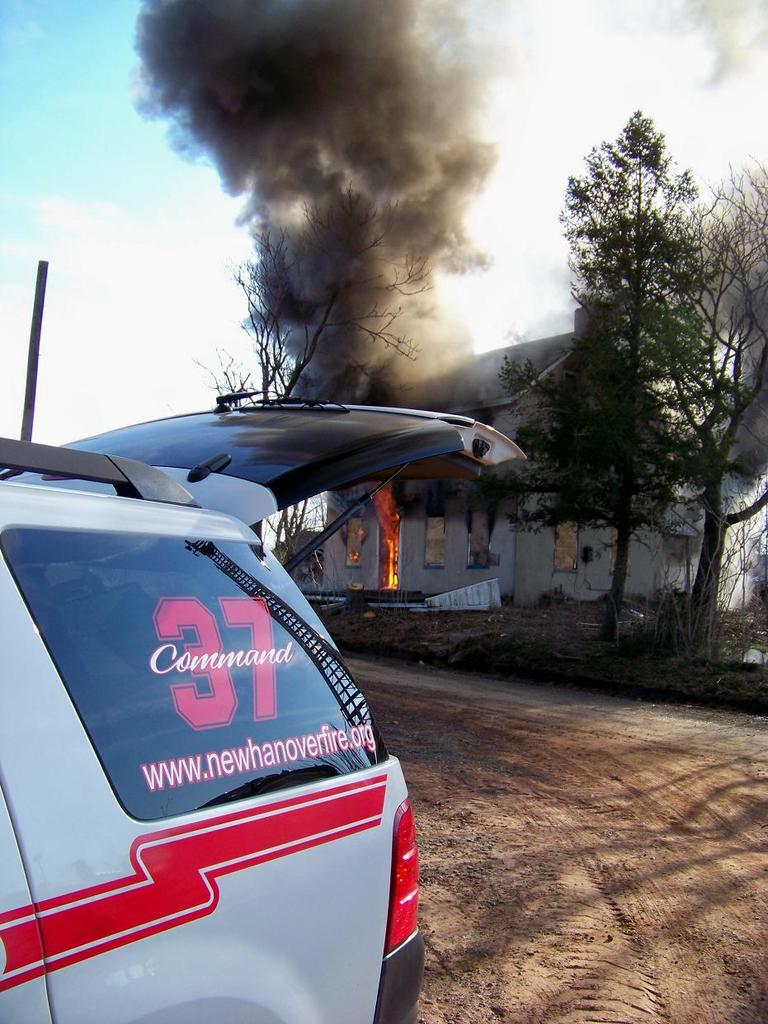 Permalink Reply by Steve Marshall on May 13, 2010 at 1:50am
The biggest thing for me to learn when I started to shoot for a "fire " aspect as opposed to strictly for news use, is to shoot the firefighters themselves...not just the fire, or the fire trucks....shoot candid shots of the firefighters in action. It wont take long for them to start to pick out what looks good and what doesnt. I got one to share...It was at a house fire and a firefighter was getting his tank changed...not something that I would normally have shot for news use...but the look on his face was one of "I went in there and kicked that fires ass!". 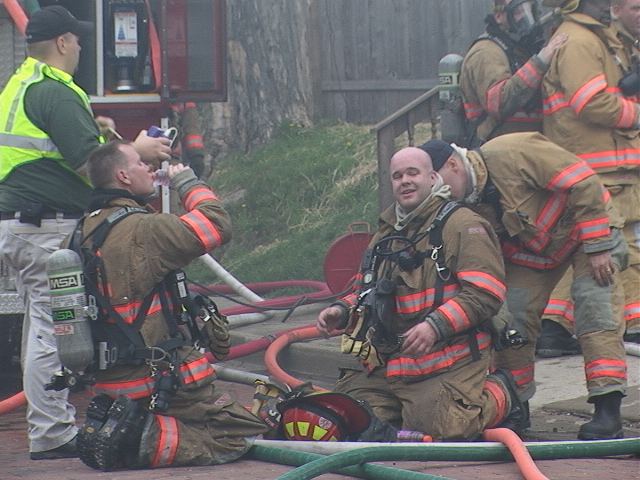 Permalink Reply by Bill Rosemeier on May 13, 2010 at 1:41pm
Steve,
Love it. With your permission, can I use this and your statement in my class?

Permalink Reply by Steve Marshall on May 15, 2010 at 8:45pm
Bill, you're welcome to use it. Sorry to take so long to reply,, Im out in Oklahoma doing some storm chasing.

Permalink Reply by Steve Marshall on May 15, 2010 at 9:07pm
I try to take a shot that tells a story...not just some unconnected happening on scene, but something that is self explanatory...like this shot. I had parked well away from the scene...and was headed back to my car (the silver Honda Element on right side of road) when I heard that familiar sound on LDH being laid out and knew I was about to spend several more hours on scene since I had now been "laid in".

Permalink Reply by Steve Marshall on May 15, 2010 at 9:19pm
And last one...this says "WTF????".
This was a 1500 pound wrecking ball that broke lose and rolled downhill for nearly a mile...hitting 9 cars along the way, damaging curbs and then ending up in the trunk of a car, and shoving it into 2 other cars at the light. 2 injuries. This video made the rounds internationally because it was such a weird story.

Permalink Reply by Katie Witters on July 6, 2010 at 11:33pm
I am the firehall photographer and firefighter. I mainly take pictures though. I try to get some of us just fooling around the trucks and gear then I get some while on secne like gearing up. I try to take a lot of different pictures. We do a end of the year video and I try to get all kinds if you need more ideas let me know.
Attachments:

Permalink Reply by Ron Briggs on October 24, 2011 at 2:45am
Bill, I am the the photographer for my local dept.  I have a brother in the fire service currently and my father was formerly. That is where I received some of my knowledge when I was younger and now put it to use.    The best way to instruct in my opinion is have everyone start on the outside (do a 360 of the scene if possible) and then work the way inside. Are you going to be instructing this on an investigator standpoint or the overall picture (whole scene action and all)?  Good Luck

I am a photographer for my fire department, as well as assistant to the PIO (FINALLY got a paying job doing this! AWESOME!); and I echo what most here have said - the excitement comes from the people involved in doing the job. A fire without the people is not nearly as dramatic.

If I were to pass on any other advise to aspiring photographers, I'd share these thoughts:

- Shoot from different angles. My current camera has a flip-out LCD monitor, which I absolutely love; it enables me to shoot higher up or lower to the ground without having to contort myself into all kinds of funky positions.

- Network with people. Get to know your customers (in this case, firefighters). Ask them what they want to see, and if it fits with your vision, then incorporate their feedback into your style of shooting.

- Pay it forwards. Pass on what you learn. Knowledge not shared is wasted.