I am writing this to ask everyone whats your opinion on civilians taking pictures at a fire scene. I ask this because i am a civilian and I do take pictures in my town of fires scenes when they happen which is rare. i have never had any problems with anyone and lots of the emergency workers know who i am. if you can please tell me your opinion i would appreciate it

Permalink Reply by Steve Marshall on January 4, 2010 at 9:22am
I have no problems with them and you are within your rights as long as you obey the orders of firefighters and police AND NEVER CROSS THE YELLOW TAPE! There are many many "fire buffs" who just chase fire calls to take pictures and many of them turn out to be excellent photographers and can be sources of great information for us news types. Read the threads here on building trust among the firefighters and then live that life. As long as they trust you, you should have little problem on the fire grounds...unless its from some uppity policeman. The only advice I would like to pass on to you is that if you see a news camera person shooting, try not to step into their shots. Be aware of whats going on around you so that you dont accidently step in front of their camera shot. Sometimes its unavoidable, others times it is. Its just professional courtesy. You might find that as time goes on, your local tv station or newspaper starts to seek you out for pics of things they missed.

Permalink Reply by Janine on January 4, 2010 at 5:15pm
I agree with Steve Marshall. He has made many fine points about scene safety and not overstepping your bounds (yellow bounds to be exact). Even if there is no yellow tape to be found, please stay a safe distance away. The fireground is a busy place with plenty of things to trip over or have fall on you. I would love to pick on Steve for his advice on staying out of the news photogs shots, but I can't. The news crew has a limited amount of time on scene to get the story, edit, prep, then present for the next news run. I would only add that you respect the privacy of the victims in any scene. And, maybe the most important rule, firefighters and EMS people LOVE to see pics of them in action. Try dropping off some prints at the departments that were at the incident, along with a business card. Good luck and look through all the fire photography forums for more advice. - Janine Eastman WTES IFPA

Permalink Reply by Nicholas Relich on January 4, 2010 at 8:46pm
Thanks I dont have a business card but i will drop the copys off at the station

Permalink Reply by PJ on January 5, 2010 at 3:18pm
Nicolas,
I am 17 years old and have been shooting pictures at fire scenes since I was about 12. At first it was a way for me to watch what was going on because I wanted to become a firefighter. Now I am in college majoring in Fire Science and also attending fire rookie school. I still shoot incidents involving about seven different departments and I concur with all of the advice given so far. I can't tell you how important it is to drop off pictures or discs. All the departments around here use my pictures for training and the guys love them. I just finished doing slide shows for five different FD christmas parties. Now if I don't show up I get asked why. I have even been given pagers from a couple departments to use in case my scanner is off. I find I still get the eye from a few police but most of them in the area know me and make sure I find somewhere close by to park. My biggest suggestion is RESPECT. Learn what the guys and gals are really all about, what they go through and when you shoot photos incorporate that in them. Group pictures for the wall, rehab shots, even embarrasing moments that ONLY go to them make you popular. Stay safe, PJ www.pjk815.com

Permalink Reply by Steve Marshall on April 4, 2010 at 4:13pm
Business cards....Vista print.com is fast cheap and reasonable quality. I think i paid $7.00 for my last order of 500, and their on-line design widget has lots of fire and photography logos etc. Also, I offer nearly all of my stills and some video to the local FDs for training, PR or website use. It makes it really easy on you and the firefighters if you get a free account on photobucket or another free pic site and simply upload the ones you are willing to share. Then the firefighters can go there at their leasure and pick which ones they want to use. I do this with some basic requirements. If they use it in print or web use, I want photo credit, same goes for newspapers, magazine or fire website.

Permalink Reply by Steve Marshall on April 4, 2010 at 4:20pm
Yeah I have to agree, respect the privacy of any victims, and dont get caught trying to get that shot of the sheet-covered DOAs either. Stepping in front of a news photog is not the end of the world...I will say that Ive had a few great shots ruined by rubberneckers and other photogs who were either completely oblivious to what was happening behind them (ME) or didnt care. Also, you might run into the situation where friends of the victims of fires or crashes may deliberately stand in front on you to block your shot. It happens. Not worth an assault or even an argument if you are just fire buffing. Its an entirely different matter if you are shooting for news. I WILL get in their face then if I know Im in the right. Read some of the other postings here about photog rights and restrictions on the fire grounds. In general, if you are on public property, you can shoot pretty much whatever you can see....as long as the object of your attention is not entitled to a "reasonable expectation of privacy" and there are no homeland security restriction.

Permalink Reply by Doug Walton on April 15, 2010 at 2:55pm
Hafensteiner, I'm curious about your statement that the civilian photographer would have been arrested if they didn't comply with the orders (to remove the pictures of a patient). As far as I'm aware, if it's in public view, it can be shot. If you, as an authority figure, don't like it, then either 1) have the fire line moved back, or 2) move the situation (if possible, such as moving the patient). I'm not a lawyer, but I'm not sure that would be considered a lawful order.

That having been said, I'm not condoning revealing a patient's identity. However, I also think your statement may have been extreme. Sometimes a patient being cared for can be a powerful message. For example, look at this picture I shot years ago. You can't identify the patient (who, unfortunately, is deceased), but the look on the provider's face carries a message. 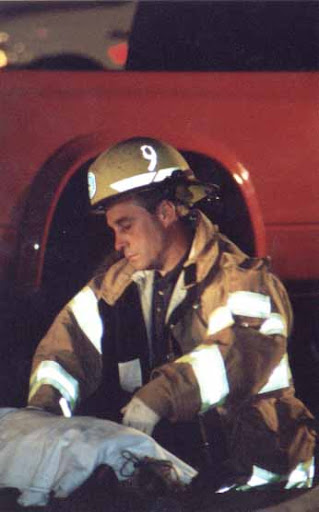 Permalink Reply by Doug Walton on April 15, 2010 at 3:24pm
I agree with your concept of respecting a patient's privacy, especially in a very sensitive time. As such, I tend to not shoot anything that would identify the patient (face, tattoos, amputation, etc); however, you seem to take a harder line (which is perfectly fine).

Thank you for your comment about the picture. I agree.

Permalink Reply by Doug Walton on April 15, 2010 at 3:34pm
It certainly could cause problems, and it's always best to make an informed decision - know any repercussions for your actions ahead of time.