a car and a deer 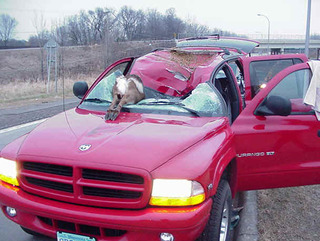 the picture is not of the actual wreck, just to give you an idea of what we were dealing with.
A call rings out,
the message is clear,
an unsuspecting driver has hit a deer,
the units roll and call for the helicopter to get ready for flight,
As we roll up onscene,
we see the impact was hard and fast,
we find a drunk man in the driver seat and hope he hasn't past,
a call goes into dispatch "FLY THE BIRD! FLY THE BIRD DISPATCH!"
officers aching to write their citations,
having to be removed from the area,
as we begin to cut the remnants of the car from around the driver,
three firefighter grab rope off the rescue truck and begin trying to pull the deer off the driver,
as the roof folds back, the deer comes free,
the driver now ready to be packaged and secured,
then the bird comes in for a rapid transport,
Paramedics running lines,
basics securing airway,
first reponders strapping the patient down,
and officers asking where he is going.
he's loaded into the bird and flown away,
now for clean-up and the end to another dreary day,
a friend for the bird calls the station that night,
say, "the patients doing well, good thing you called for the flight,
He had a punctured lung, several broken ribs,
his left arm was broken in three places,
but he's awake in a room talking to his kids,
He asked for the copter crew to come to the room,
he wanted us to contact you,
He's signed up for AA and wants to thank everyone from the firehouse,
especially the rescue crew.