A fire alarm box is an outdoor device used for notifying a fire department of a fire. Early boxes used the telegraph system and were the main method of calling the fire department to a neighborhood in the days before people had telephones. When the box is triggered, a spring-loaded wheel spins and taps out a signal onto the telegraph wire, indicating the box number. The receiver at a fire station then can match the number to the neighborhood. The boxes are still in service in many places, though many towns and cities are now questioning whether they are worth the cost to maintain.

"Note: a "Master Box" is designed to be tied into a sprinkler system, or other interiorinternal alarms typically at large factory, nursing homes, schools etc , where if an internal detector, internal pull station, or water flow alarm would trip the Telegraph box sending the alarm.. within either a standard street or Master Box is a mechanical clockwork that drives a character wheel, with a specific number sequence, each time the box was activated required the box to be rewound to make it ready again. There was also a telegraph KEY which was used in the pre radio days especially in the larger cities to notify "communications" of status on scene using codes /sequences of digets ...
Box number 1121 was a specific location if on arrival The chief needed an additional alarm, the box would be opened and 2- 2- 1121 would be tapped out, In smaller areas this would signal the bells in each firehouse, the watchman would record all bells and check the run card which would show the responses on 1st, 2nd 3rd, 4th, 5th , 6th alarms so the watchman had much responsability especially if there were a couple of boxes out nearby... administrative bells also were used in many departments, such as when paychecks were available to be picked up BY the Battalion chiefs to be distributed , or in the case of NYC, 5-5-5-5 which was they're manner of transmitting a firefighters death ( lots of of folks wonder why they use 5555) because if the potential for "stray taps" in windy conditions and thunderstorms each signal would be transmitted 2 times recall for instance would be 2-1121 while a second alarm might be 2-2-1121,
3rd 3-3-1121, 4th 4-4-1121..etc.. some smaller departments would have a punch tape that would show the punched number in the more complex systems
the circuts came into the Alarm room on these tapes and were retransmitted "quicktime" to each division station on the bells an example
of which is shown below" Jim


History
The first practical fire alarm system utilizing the telegraph system was developed by Dr. William Channing and Moses Farmer in 1852. Two years later, they applied for a patent for their "Electromagnetic Fire Alarm Telegraph for Cities". In 1855, John Gamewell purchased regional rights to market the fire alarm telegraph, later obtaining full rights to the system in 1859. John F. Kennard bought the patents from the government after they were seized after the Civil War, returned them to Gamewell, and formed a partnership, Kennard and Co., in 1867 to manufacture the alarm systems. The Gamewell Fire Alarm Telegraph Co. was later formed in 1879. Gamewell systems were installed in 250 cities by 1886 and 500 cities in 1890. By 1910, Gamewell had a 95% market share.


Advantages and disadvantages
The systems can be expensive to maintain. Some consider the systems to be outdated and that they have outlived their usefulness, given that almost every household has telephone service. More recently, many people carry cell phones that could also be used to call for help in the case of fire. However, others maintain that the systems can provide a necessary lifeline in the case of power and telephone outages or disasters. For example, the September 11, 2001 attacks knocked out cell phone service for a large part of New York City. If the power is out, people will not be able to charge batteries in portable phones, and VoIP telephony typically will not work without power. The telegraph alarm boxes, on the other hand, will continue to work in the face of outages of both electrical and telephone systems.

Permalink Reply by SMOKEnPipesJim on September 26, 2008 at 3:44pm
some more cool links ..
http://plaws.net/fire/box.html
below is a large city type of repeater system.. to transmittboxes over multiple circuts
http://www.gamewellrepeater.com/

Permalink Reply by Chief 29 on January 22, 2009 at 11:29am
There is a working system set up at the Pennsylvania Fire Museum in Harrisburg PA. It is really interesting to see how the system actually worked from the time some one activates the box till the call comes across at the engine house. They have done a real nice job of preserving that system. I try to visit the museum once a year or so. I enjoy anything to do with the history of firefighting.

Permalink Reply by SMOKEnPipesJim on January 22, 2009 at 3:22pm
But lets face it, a working a working Gamewell system isa lot more exciting then say a firemark or leather bucket, anyday...lol

Boston Fire alarm's system (as far as I know) continues to operate on a system based upon a Gamewell repeater system adding aspects of it and removing aspects, Its rather complex because as I understand it they still "tap boxes" out audibly on they're primary channel/frequency In MY department which was one of the 1st talk alarm sytems in the country flushed the idea responding to a "box location" in lue of a map grid? its weird that many places get stuck in a rut.... Even FDNY transmits Telephone alarms for box 1234 1234 east broadway between 1st and 2nd for the reported apartment on the 6 th floor apartment 4-C.... is transmitted .. if you think about it it sound slike someone called on a phone to say the street box is on fire at first , but the box locations are what they are... even ifthey dont have those boxes anymore 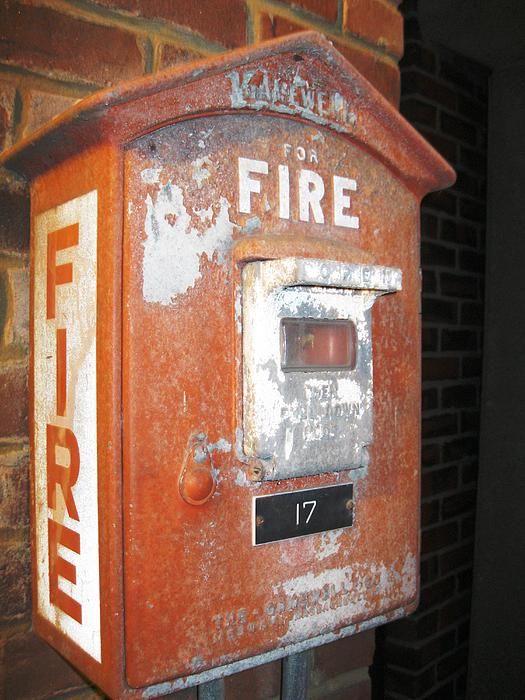