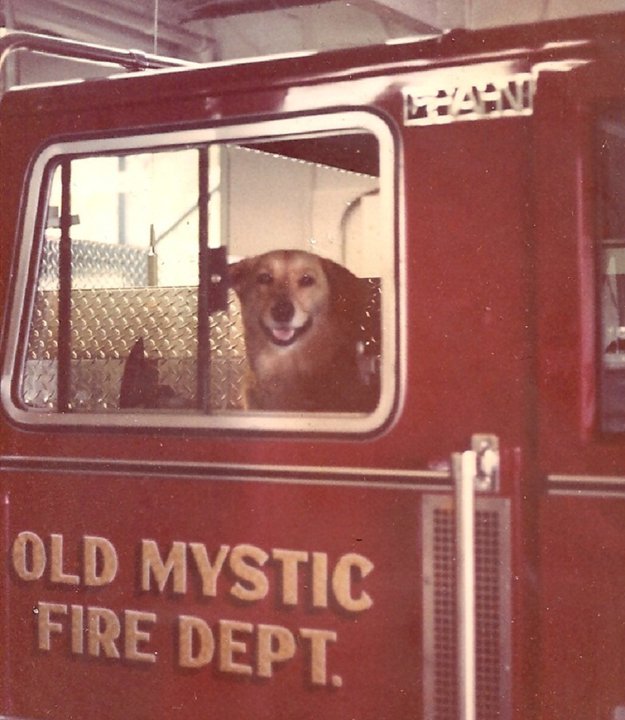 It had been a typical summer day, hot and humid clear, and by the time the sun set the regular guys were at the firehouse , the bay doors open and we were watching something on the tube when before we realized it a thunderstorm rolled our way, I was sitting closest to the apparatus floor door and noticed something out of the corner of my eye go past the open door, as the storm got stronger, we hadn't even thought about it much, BUT I said what the heck? Getting the other guys attention I told him I saw something move past the door so we got up and walked out on the floor checking out if one of the guys was gonna jump out of somewhere or other typical firehouse goofing around , but there were no new cars in the lot and no one looking for directions as usual, I went into the workroom, nothing and to the radio room where I found, cowering under the actual radio a german shepard mix scared to death from the now loud thunder .... with some talking and eventual petting I talked her out away from the radio, which of course was connected directly to the antena....which is grounded but... anyway I gently coaxed her into the day room, tryed to make her as comfortable as possible, gave her some water and a left over slice of pizza..

It was about 6 months before we learned her name was Tasha for one of the kids in the neighborhood and in fact his freinds dog.... after the storm, Tasha regularly popped in and over time became a regular.. at the vollie house and it wasnt for several years that the owner of the dog made contact with me, and asked about a picture I'd taken of Tasha sitting on the engine, That the kids had mentioned to him. I had a copy made for him and was astounded when he published it along with his editorial in the local newspaper, because he had recieved his umpteenth citation from the dog catcher for catching Tasha roaming....The story was about how no matter what they tryed she would eventually find a way to escape she did her rounds of the village daily, the gas station when they opened , then the general store an hour later, to the bus stop with the kids , over to one of three or four k9 pals around and finally to the firehouse and at the end of the day, When I left to go home, I'd drive down River road , she'd walk down behind me to her street stop to watch me go out of sight and turn up the hill and home.. many of the guys told me of times when she'd stop by ,and If I wasnt around, she'd greet everyone get a pet, and usually go on her way, But If I was there she'd stay till I left sometimes early mornings.... I drove a truck so my schedual varied a lot, But the guys always said she came to see "Me".. more then anyone else... almost 6 years her visits went on, sadly the family was moving and they offered me the dog, and asked if anyone else could take her, I could not both due to the living situation as well as where my job took me.. I am sure it broke her heart, I know It really broke mine... she was so sweet and mellow and well behaved, we even took her on the engine a couple times one time she even had to ride to a call, The now Chief of the same company then had a dalmation, the dog was a hyper physco .. if the rigs started it barked if anyone walked in it freaked out, if you hit the siren it would climb the walls , Tasha fell asleep on the engine box while at an accident scene ..night and day .. Gimme a mutt anyday
I have "the photo" from the newspaper, I will have to try to get it scanned

Permalink Reply by Dale on January 13, 2009 at 11:34pm
this is my dog, they rots are supposed to be really smart, but mine seems to be dumb... he locks himself in the bathroom alot
Attachments:

Permalink Reply by SMOKEnPipesJim on January 14, 2009 at 12:33am
It could be, Dale that your dog just wants privacy ..lol I know One rottie who also plays with Rocks in the stream , But with Him , You throw the rock under the water , and he goes in , and brings back the same rock all the time, he gets your scent and will do the same thing for you.. the more people in turn the better for him... lol Nice picture too ...lol

Tasha did get a home, and was loved, in some respect she ended up outside of the village so as much as her whole life changed which was most likey best under the circumstances, she lived her days out well taken care of..

Permalink Reply by Dale on January 28, 2009 at 1:10pm
hey who knows he may like privacy, but he usualy is in everyones business

i took this pic today, its off my other rot
Attachments:

Permalink Reply by SMOKEnPipesJim on January 29, 2009 at 1:00am
Dale I love that pic of your "snow bear" hehe I didnt think rotties liked the snow "that" much.. Smokey on the otherhand always loves to roll around in the snow, she takes whatI call a "snow bath" afterone, and when her fur drys it sooooooooo soft and fluffy.. she also like me to"bury" her in snow, you'll only see her eyes in fact she loves to jump into a pile of leaves in autum too and get buried