I would like to start a section about the incidents that we (Can state) respond to. I know we can't state all of them, But if they hit the news or can be released I hope you can share.

Here is a incident that Subase New London responded to off base. The event happened on Nov 2. See info below

Around 10:30 Flanders and Oswegatchie fire departments responded to I-95 in the area of Exit 80 to 75 for a rollover. First due companies found two TT-units with four cars shredded over about 1000' on the south bound lane at Exit-75. Several occupants still in their vehicles. The tanker of diesel was leaking heavily from the bottom rear. Crew searched the area for victims, They found 3 DOA, walking wounded and at least one still in the vehicle. A request for M/A for the Dep Foam trailers, Pfizer foam truck, Subase Haz-mat, Multiple companies from Niantic, Jordan,Cohanzie , Chesterfield. Tankers from various departments. L&M Medics and ambulance crews handled the injured and transport them to L&M and Backus. Haz-mat & Fire crews foamed and diked the leaking liquids as other crews were setting up booms in the near by waterways in case diesel makes its way into the river near by. Command requested The IMT team for scene support. Other known agencies were CSP, DEP,DOT, Coast Guard. At this time I-95 & the lower end of I-395 will be closed for at least 8-24 hours. Major backups on the side roads will be continuing, for hours.

SBFD Haz-mat operated on scene for over 6 hrs, They ran the Haz-mat division along with CT DEP and Coast guard. Crews controlled the run off, metering and sampling near by water ways. After they aided with pumping off the trailer. 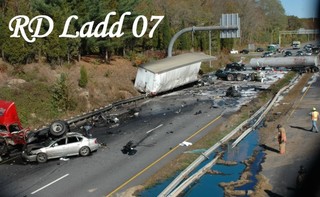 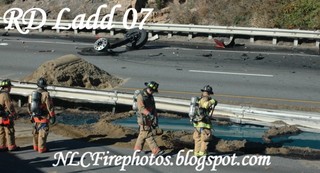 Permalink Reply by Rob on January 12, 2008 at 11:18pm
City of Groton, 3rd alarm 01-09-08
Around 12:30 the City of Groton responded for a reported fire at 213 Thames St. Kens Tackle shop (a 2 story brick shop and apartments with a 3/4 exposed basement). Before arrival a Box plus was transmitted, the 2nd alarm was transmitted with mins of arrival. Companies found heavy smoke conditions on all floors, with a active fire in the basement. Groton firefighter were hampered by a heavy reinforced metal door to the basement, they used the Hurst tool to gain entry to the basement. Then along with CGFD attempted repeatedly to gain access to the main body of fire. During this time PGFD members search the 2nd floor apartment as smoke push through the floor boards. Subase FD and others vented the plate glass store windows to release heavy brown smoke from the 1st floor with mins Heavy fire took hold of the tackle shop. OMFD, EDFD with help set up Blitz fires and 2.5s to knock down heavy fire condition venting and spreading to the upper floors. For the next few hours firefighters from many companies worked to keep the fire from spreading to adjacent buildings. Some units operated on scene for about 20hrs. Units operating on scene were from City of Groton, Poquonnock Bridge, Noank, Mystic, Old Mystic, Center Groton, Electric Boat, Subase, Gales Ferry, New London, Mohegan Tribe FAST, Groton Ambulance, L&M Medics, Canteen 1 & Providence Canteen, W-41, W-55, W-94 were in staging and/or covering the City district. Permalink Reply by Allen Wahlstrom on January 19, 2008 at 7:16pm
From the Caller Times

A former Marine, he said “It’s been a long time since I heard that sound.”

He walked outside and saw what he thinks was the helicopter’s rotor lights through the night sky. He smelled burnt fuel.

“It was kind of smell you get when a bad exhaust system passes you on the highway,” the 34-year-old photographer and former Marine said. “At that point, I said, " ‘It has to be low.’”

Then he saw the lights dip down. And he heard and saw an explosion, about a mile and a half from his house.

He watched the flames shoot up. Then he saw flares - two of them, he thinks about 30 seconds apart.

He called 911, but someone else in the vicinity beat him to it.

There has been speculation that the helicopter hit a television tower, but Navy officials are still investigating the cause of the crash. Herrera said he didn’t hear anything like a loud bang before the helicopter passed over his home, and didn’t hear a sound that indicated to him that the aircraft hit the tower. But he can’t, he said, rule out an impact with the tower as a part of the crash. 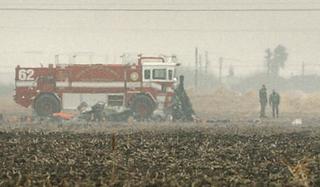