Does anyone else have problems with their pagers receiving tones and or voice.  My department is in a rural valley and does not have the best line of sight to the repeaters that send out the pages from our dispatch.  Some of our pagers do not get the pages at all when next to other pagers that receive voice and text clearly.  At times the same pager will drop the voice portion of the page and only get tones.  I have read that if you increase the delay on the pagers it can help with the voice, but what if the pager isn't even receiving tones at all?   Are the Minitor V pagers just faulty.  We have sent multiple pagers back to Motorola for repair, but as they are out of warranty this is becoming very expensive for our small department.  Any advice is greatly appreciated.

Permalink Reply by Bekks on November 3, 2010 at 4:41pm
I don't know what the geography of your area is like - just going on your second sentence.

Sounds like there is a need for another tower down in the valley, or have an additional antenna added to the existing tower so you can get the signal down into it. Something like a wide-angle "beam" antenna angled down into the valley. (see picture below)

The term "omnidirectional" in antenna language means all around but still in the same plane that the antenna is mounted in. If you need coverage DOWN, then you need to point a wide angle antenna DOWN.

Pagers are generally good at getting signals despite the polarization (horizontal sitting on table/vertical clipped on your belt) but if the tower is shooting signal out from it's location and you are under it... you are not going to get reliable reception.

It's like when you are in the basement watching the game on TV...
Your wife is talking to you from upstairs... you are not going to hear her as good as if you were on the same floor. (The game represents interference in recieving the message from buildings, other radio systems, power transformers, etc). If she had a bullhorn (a beam antenna) in her hand pointed at the basement door... you would hear her (get your pages).

So you see it's not the pagers fault, it's the tower and antenna selection.
For some reason the pager is off the hook in the blame game easier than you watching the game though! 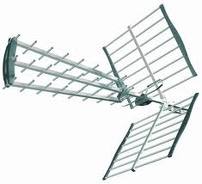 Permalink Reply by Sam Safier on November 4, 2010 at 12:18am
ok thanks, unfortunately we are a small volunteer department and putting in an independent antenna or reaiming the existing antenna is not an option as we are dispatched from our county dispatch. It is their antennas and they serve other departments. I am trying to work on the financing for a repeater and antenna setup in the top of our valley that can pick up the dispatch signal and then repeat it to our pagers. I think this will also help with both our internal radio communications and our radio communications with county dispatch.

Permalink Reply by Bekks on November 4, 2010 at 12:51pm
Well the county (or whoever is providing your dispatch service) SHOULD be the ones taking care of it then.
If they are providing a service they should make sure it is delivered... not just say "meh, good enough."

Have the Chief (and mayor, councillors, etc) bug them to fix it.
They don't want an inquest or lawsuit to be the motivator for improving signal reception.