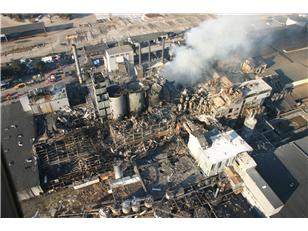 The report said the company had not conducted evacuation drills for its employees and that the explosions and fires disabled most of the emergency lighting, making it difficult for workers to escape from the labyrinth of explosion-damaged buildings as the fires continued to spread.

The final report proposed a series of safety recommendations for Board consideration. Imperial Sugar was urged to comply with National Fire Protection Association (NFPA) recommended practices for preventing dust fires and explosions, develop dust training and housekeeping programs, and improve its evacuation procedures.

A 2006 CSB study identified 281 combustible dust fires and explosions between 1980 and 2005 that killed 119 workers and injured 718, and extensively damaged industrial facilities. The CSB recommended in November 2006 to the U.S. Occupational Safety and Health Administration (OSHA) to develop a comprehensive regulatory standard for combustible dust, based on existing NFPA consensus standards, and improve requirements for dust hazard communication to workers. In April 2009, OSHA announced it would commence the development of a standard.