So what's everyone's favorite brew? You can list more than one of course, because it's just so damn hard to pick just one. I myself enjoy Yuengling Lager(America's oldest brewery), Ahrn City(That's Iron City for those of you that don't speak Pittsburghese), Straub(Brewed in St. Mary's, PA), Killian's Irish Red, Blue Moon(Made by Coors), Purple Haze(made by Abita Brewing Co), and I did like Rolling Rock before they went bankrupt and sold out to Budweiser....it's no longer that good of a beer.

Permalink Reply by Heather Langston on February 10, 2008 at 12:10am
Ahhhh, another kindred spirit!! I too enjoy Iron City Beer, though its hard to get in Florida. In recent years, I've added Guiness, Mississippee Mud, Blue Moon, and Yngling to my favorites. I tried Heinekein at Universal Studios the other day and it wasn't half bad.

Permalink Reply by Doug on February 12, 2008 at 8:35pm
Just found this pic and had to post it. You might appreciate it Heather. Primanti's and Iron side by side. 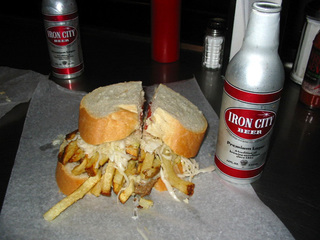 Permalink Reply by Bubba53 on April 29, 2008 at 8:53pm
What I drink depends on where I'm at, But Mostly I drink Guinness and Smithwick's but I have been known to drink Rolling Rock, Numerous Sam Adams Beers, Iron City, Hop Devil, and Harpoon has come out with Hibernian Ale, which I drink at my AOH.

Permalink Reply by MLF on May 13, 2008 at 7:49am
I Would Also Have To Pick Bluemoon As A Favorite Beer, But My Favorite Of The Bunch Is Yazoo Hefewiezen Made Right Here In Nasville Tennessee. I Mostly Just Drank Beer For Its Usual Mellowing Effects, But This Yazoo Wheat Beer, (And Also Including The Bluemoon) Are The First Beers I have Ever Drank Where You Want To Swirl The Beer Around In Your Mouth To Just Enjoy The Flavors. But I Can Also Enjoy A Killians Red Or A Nice Amberbock.

Permalink Reply by John Waltenbaugh on June 2, 2008 at 12:00am
Give me a Gennese or a Iron City I can get them both here in Colorado but they taste so much better fresh back in PA oh an dif I have to I will drink a Straub but only if it has been kept ina dark room and comes from a green bottle . Its been a long time but Istill remember how to drink it

Permalink Reply by Malin on June 7, 2008 at 4:33pm
Millers is my favorite, but it's very expensive here in Finland
Carlsberg is good
Lapin Kulta (means The gold from Lapland, it's a Finnish brand), and it's ok
Pripps blå (a swedish brand)
Saku (estonian brand)
That's my 5 favorites

Permalink Reply by wayne on June 9, 2008 at 6:23pm
I like Smithwicks also and Hoffbrauhaus

Permalink Reply by Donald Canterbury on June 12, 2008 at 11:11pm
My favorite is Bud Light. That's my overall favorite. Every now in then, I will have a Coors Light. Just depends on the occasion also and what's available to drink. I will try some others every now and then, but usually refer back to the usual (Bud Light).

Permalink Reply by Jeff Borra on June 15, 2008 at 2:45pm
Also use to like Dixie Beer made down in the Big Easy New Orleans. But can't find any more.

Permalink Reply by kel229 on September 7, 2008 at 6:20pm
I like Guiness, Sam Adams, just recently discovered Smithwick, Blvd Wheat with a lemon wedge on a hot day. I'll drink bud if I just looking to drink something.