PHILADELPHIA - Massive steel remnants of the fallen World Trade Center towers are being returned to the Pennsylvania city where they were made more than four decades ago, in a solemn homecoming that was never meant to be. 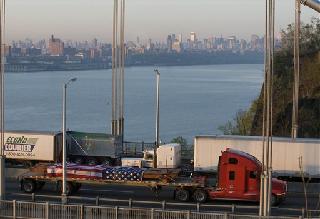 A steel beam salvaged from the World Trade Center is transported across the George Washington Bridge in New York on its way to Coatesville, Penn., Wednesday April 14, 2010. A mile-long convoy of 28 tractor trailers carried 500 tons of steel from the twin towers to become the centerpiece of a planned National Iron and Steel Museum in Coatsville, Penn., where the steel was created 41 years ago. (AP Photo/David Goldman) 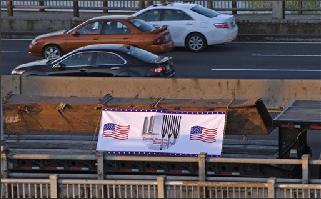 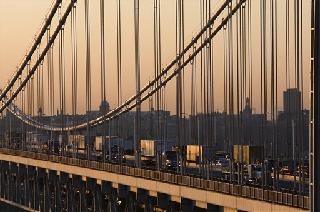 
A mile-long procession of 28 flatbed trucks is expected to arrive in Coatesville on Wednesday afternoon carrying 500 tons of structural supports, referred to as "steel trees" because of their upward branching shape.

Forged in 1969 by Lukens Steel Co., the supports framed the perimeter of the twin towers' first nine floors and massive lobbies before the Sept. 11 terrorist attacks reduced both skyscrapers to rubble.

"It's our goal to honor those who lost their lives on 9/11, as well as the steelworkers who created the steel for these monumental buildings during the 1960s," said Scott Huston, a descendent of the Lukens family and president of the Graystone Society, a local historic preservation group.

The ten "steel trees," at 50 tons apiece, will be greeted in Coatesville with a procession through the city and a ceremony hosted by local civic leaders who want to open a proposed National Iron and Steel Heritage Museum.

The World Trade Center's twisted steel supports, among the few remaining pieces of the 110-story skyscrapers still standing in the aftermath of the 2001 attacks, became an iconic image of defiance and strength for a mourning nation.

"We feel that it is only fitting that these trees become the keystone of The National Iron and Steel Heritage Museum, especially as the 10th anniversary of 9/11 draws near," Huston said.

Though the event will be somber in tone, the arrival of the World Trade Center artifacts is also seen as an element of the rebirth of Coatesville, a city of 11,000 about 35 miles west of Philadelphia.

The city grew alongside the steel industry and it has also declined with it. In 2008 and 2009, Coatesville made national headlines amid a plague of dozens of arsons that caused millions in damage and left one person dead.

The Graystone Society is forming a committee to oversee the design for a memorial that will incorporate the structures. The group is named for the Graystone Mansion, part of The Lukens National Historic District that also includes the 35,000-square foot former industrial building that will be museum's home.

An opening date for the museum has not been announced.

The Port Authority of New York and New Jersey donated the steel supports. Fundraising efforts are under way to recoup the $180,000 in shipping costs paid by the Graystone Society.
___