What type of pumper do you have?

I'm just interested in seeing who uses what for a pumper.

Anyone using Pierce, Seagrave, Hahn, American LaFrance or others who uses what?   Just curious?

Permalink Reply by Ben Waller on October 23, 2011 at 8:00pm
What's next, Hay Bleves, Overhaul Thongs, or Reiki and Orbs? 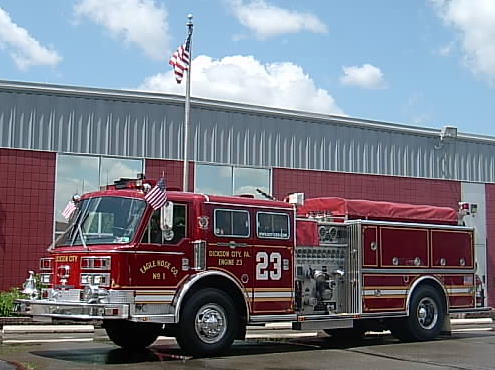 Permalink Reply by Don Catenacci on October 24, 2011 at 12:16pm
I always thought those Century 2000 Pumpers from ALF were cool looking!

You haven't been around here long enough, some of us are just tired of the what-make, what-color 'discussions'.  There's a chat room (now), seems to me that would be the best place to ask about such things or, perhaps start a 'group' where people can discuss it.  But in the general forums it is tiresome to see people wanting to know what color POV lights, what type/color engine or turn out gear is best.  It in no way facilitates the exchange of practical information and, as I pointed out previously, seems only to satisfy the hobbyist firefighters who are more comfortable 'collecting' and 'exchanging' whose engine is what color.  Yet, when there are topics on tactics and strategy they (may be viewed but) are mostly ignored.  Funny thing, it takes some level of skill and experience to discuss tactics and strategy and little more than a tee shirt to debate which brand apparatus/turn out gear is best and what color they should be.

So even though you like to breeze into these 'discussions' and decree that some of us are 'crabby' it's really more just feeling fed up to see what was a vibrant site slowly spiral down the drain while people exchange their thoughts on morning pride, cairns, E-1 or how many blue lights on a POV while not (or hardly) interested in actually being a firefighter.  In other words, rather than focusing on the skills of the trade, far too many focus on the trappings of the trade.

And not to put too a fine a point on it but, with 0 years in the fire service, don't you think you would be better served asking questions/starting discussions (maybe using the search function first, hell even revive an older discussion (after having read all of the responses to see if your question may have already been asked)) and LEARNING the trade rather than simply wanting to know about helmet colors who who uses which manufacturer of apparatus (really, shouldn't you be all about knowing how YOUR department apparti work and where everything is located, I mean, how does knowing what other departments use improve YOU as a firefighters?)

And one complaint you'll hear from the 'crabby' is that this is turning into facebook (and sadly this site itself doesn't seem to have a problem with that) but...I'm sure people can go TO facebook and start some kind of similar group (and subsequent, similar discussions).  But you aren't going to find the talent and the knowledge that a large number of people in here have, are willing to share and often do share.  Funny thing (again) how often those that actually know the job (and have attained the rank of Lt, Capt. OR Chief, on paid departments mind you) are often berated by the very ones they're actually trying to help (or to answer their question(s)).

So long-windedly your rather breezy, can't-we-all-just-get-along demeanor, while greatly appreciated by the warm-and-fuzzy-hugs-all-around-let's-sing-kumbaya folk in here, tends to come off as something somewhat less...practical.  But that's just my opinion.

I don't have any reason to "berate" anyone. It's not professional.   My questions were asked mostly because there are inconsistencies between departments as not everyone is subscribing to the NIMS system yet. My Red Helmet for example would be viewed as an officer's helmet in an adjacent county of perhaps a Captain or a LT.  It could cause confusion on a mutual aid call where several Depts. had to respond.  We are sitting on top of the East Coast Earthquake Capitol and our Southernmost Counties of Louisa, Caroline and Hanover use different systems than we do for personnel recognition. Should there be a need, all of our mutual aid agreements would be in full force.

We think about Earthquakes often now whereas now we still continue to receive aftershocks. USGS installed a shock monitor at our station.  Gratefully the Nuclear Plant is still offline for now, but having another "Fukushima" disaster this close to the nation's Capital is a constant thought.

It needs to be understood that I "took the hint" about the search function.  As far as knowing what other Depts. use for equipment and apparatus goes toward improving me as a firefighter because if they are using a different "technique" or even a different tool" and they successfully get a job done  better than what we could have done with our tools and things, then certainly, I would follow up on that.

My area is not just served by Fire Depts. as the sole emergency providers. We have many other agencies outside the Fire Service who provide emergency services to our state, such as military units from the Coast Guard, (Dept. of Homeland Security)  Air Force Auxiliaries, the Virginia Defense Force (VA National Guard) , USMC (Quantico) and Army( A.P. Hill)  units from the surrounding bases.   We have memorandums of understanding with them that allow the Air Force / CAP and Army  to participate with us without violating the statutes of "Posse Commitatus"    My area is very military and our communities here "share" resources back and forth between military and civilian units in the event of a disaster depending on the specifics of the incident. Our jurisdiction has 10 different bordering jurisdictions, overseen by State and Federal agencies such as the VA Dept. of Emergency Management, but not limited to agencies such as Amtrak and the National Park Service.  So knowing how to recognize an asset  ( a firefighter or other person) from a distance would be critical.

Do I expect the exact "rundown on who does what in my area here on this discussion board?"   No I don't. I should be able to get that from my Dept. but if they don't have it, then I will compile it.  But it is a "Social Networking " site here and sometimes people will just open up and share something out of the blue that could be of benefit to an audience like this.

I am always amazed, on so many forums, how someone will post a seemingly innocent topic and others jump on them about it.  Almost like they are forced to read and comment on every topic.

Look, it is really simple.  Look at the title of the topic.  If you don't want to participate because you have seen it a million times, or you find it innocuous, or repetitive, then pass the topic by.  Heck Dudes, I pass by far more topics here than I comment on.

I find this kind of topic very interesting and the chance to read about or look at other FDs rig is something I enjoy very much.

they serve as structure and interface engines

Nicely said, and it gives us a good idea of your CV.  That being said, I failed to see how knowing what brand of apparatus a department has is of any benefit, other than to the hobbyist/stamp collectors.

Based on what you wrote, all departments need to be in 'compliance' with NIMS by all designating the same color helmet for the same rank.  Of course, that presumes that all departments have all the same ranks.  In any event, don't really see how everyone wearing the same helmet is going to make everyone NIMS compliant.  I mean, in my department, command staff has vests to wear with identification (and enough vests for MA depts. on a larger incident.)  As I've been on large incidents with many MA departments on scene, the command post was clearly marked, all command staff had vests on identifying their position.  Helmet color had NOTHING to do with how the incident was run other than to let each engine crew know where THEIR officer was.  But then, if you haven't been on a large, involved fire ground incident you may not be familiar with how they're run.

And the NIMS argument pretty much falls apart when it comes to apparatus.  Departments are price point shoppers mostly and color is equally a departmental option.  I don't think NIMS mandates any apparatus color scheme.

Again, with 0 years in the fire service you seem less interested in learning the job than you do in lecturing and presupposing, but then, with your CV, maybe you're just in your department to liaise with surrounding departments and agencies.

I never suggested you would get a rundown on who does what in your area, that's your conclusion.  I suggested you'd be better served learning your 'trade'.  Discussions on helmet and apparatus color are the stuff of juniors/cadets/explorers and those who are more into the 'appearance' of being a firefighter.

Nothing says professional hobbyist more than posts about nonsense and useless discussions.

Were you to follow your own advice you would have just moved on, instead you too chose to editorialize.  Me to point out that I think these discussions are useless and make this site seem like a haven for posers and whackers; you to encourage them and find them 'entertaining.'  How is it that you would be right and I would be wrong?

Neither NIMS, the NFPA, or any other national-level fire service program or group mandates any specific helmet color or apparatus color for any reason.

I agree that we need to focus on substance, not appearances.

One of the components of being a profession is having a specific, discrete body of knowledge.  It does not include "what color is your ____" trivia.

You don't see lawyers having "what color is your briefcase?" discussions, or see doctors asking "what is your favorite scalpel brand".  If we want our profession to get professional respect, we should take the same kind of approach.