TUCSON, Ariz. - A veteran firefighter refused to respond to last month's deadly shooting spree that left Rep. Gabrielle Giffords wounded because he had different political views than his colleagues and "did not want to be part of it," according to internal city memos. 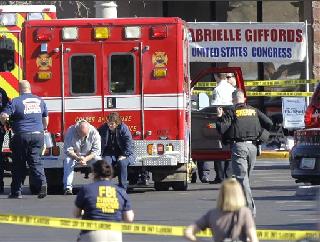 In this Jan. 8, 2011 file photo, emergency personnel work at the scene where Rep. Gabrielle Giffords, D-Ariz., and others were shot outside a Safeway grocery store in Tucson, Ariz. Veteran firefighter Mark Ekstrum refused to respond to the deadly shooting spree because of "political bantering," and it may have delayed his unit's assignment to help, according to internal city memos. (AP Photo/Matt York, File)

Mark Ekstrum's insubordination may have delayed his unit's response because firefighters had to stop at another station to pick up a replacement for him, the Arizona Daily Star reported.

While the crew was not among the first called to the supermarket where six people were killed and 13 others wounded, a memo from Ekstrum's supervisor said his actions caused "confusion and delay" during the emergency.

Ekstrum's team, which is specially trained to handle large medical emergencies, was dispatched to assist 90 minutes after the Jan. 8 shooting.

The 28-year veteran of the Tucson Fire Department retired two days later while his supervisors were still considering how to discipline him, according to the Star, which obtained the memos about the incident through a public records request.

Capt. Ben Williams wrote in a report that when Ekstrum first said he would not go on the call, "he mentioned something about `political bantering' and he did not want to be part of it."

Williams said in the report that he told the 56-year-old firefighter that he could not refuse a call for that reason and then talked to the firefighter privately in his office. He said Ekstrum "started to say something about how he had a much different political viewpoint than the rest of the crew and he was concerned."

Despite being told that was not acceptable, Williams said Ekstrum informed him he was going home "sick," so they answered the call without him.

Ekstrum's crew had been dispatched at 12:03 p.m., seven minutes after the last patient arrived at the hospital, said Joe Gulotta, an assistant fire chief. The team was responding as a support crew with a large delivery truck with tents, medical supplies, water and cots used to assist those who were not seriously injured.

Ekstrum declined to comment on the Star's story and refused to elaborate on any details of the memos when reached at his home Thursday by The Associated Press.

"I have nothing else to say about it," Ekstrum said.

But the Star said Ekstrum gave a statement Wednesday to the Fire Department saying he was distraught over the shootings and was "distracted to the point of not being able to perform my routine station duties to such an extent that I seriously doubted my ability to focus on an emergency call."

Ekstrum also said in the statement that he had no problem with Giffords and even voted for her in the last election.

Based solely on what I've read here on FFN (admittedly not enough to know for sure what really happened) the only thing I actually respect about this individual is his decision to retire.

First, there was no "enemy" and the unit in question wasn't on the scene, so there was no "face", either. The perp was in custody, the patients had all been transported, and they were just taking a support unit to the scene for the aftermath.

Second, ANYONE can have a bad day, realize that they are not prepared to respond, and tell their supervisor that the best choice is to not risk their co-worker's safety because their mind isn't on the job.

Third, it actually takes a great deal of courage to admit that you are not emotionally prepared to respond to a call and to realize that not going on the call is a better choice than going on it.

Your last statement is completely bogus. Projecting one person's refusal to go on a single, specific call onto other people simply because they can understand why the firefighter took that action has zero validity.

It would take a great deal of courage for me to ever work with this guy. (I know he retired, but he could unretire tomorrow - or not retire at all and decide to come back to work when he "felt better").

Maybe I'm not as enlightened, progressive, or magnanimous as I should be, but I doubt I could ever trust anyone who decided he wasn't "emotionally prepared to respond to a call". I'm just sayin....

Permalink Reply by Ray Purcell on February 25, 2011 at 12:45am
I have to agree in part with some of the recent replies. There would be a trust issue, but how many times has another fellow firefighter done something questionable, and we just accepted it? As I said previously, since we were not there at the time, we will never know all of the circumstances of what led to Mr. Ekstrums decision. It's easy to sit back after the fact and rehash it all, but hindsight is always 20/20. I'm quite sure even Mr. Ekstrum is questioning whether or not he made the right call. Yes, he made a bad decision as far as his duties went, and he does deserve some kind of punitive action, but that is for his superiors to decide.
Personally I do not agree with what he did, but without being around around the man, and without working with him and the rest of his fellow firefighters, we are discussing from a position of ignorance. We can only use our own past experiences and our own judgement. Would I have made the same decision as Mr. Ekstrum? No, definitely not, but then I am a completely different person. We have all faced challenges in our careers, and we have all made bad decisions in the past (Any man who says he hasn't is only fooling himself), but we have to learn from all of our experiences and move on.
Do we shun the man forever, and make him an outcast? No, we should be trying to find out what caused his decision, and even during and after any punitive actions, be trying to learn from the incident, to foresee and prevent it from happening again. We debrief and use each call as a learning tool, and we should be doing the same thing here. There are lessons to be learned from this incident, and we should all take part of this and apply it to our own careers.

Permalink Reply by Ben Waller on February 26, 2011 at 1:15am
That wasn't what Al Williams said. He said that he would have a problem working with anyone that didn't have a problem with what FF Ekstrum did, not just with FF Ekstrum himself because they might do the same thing. (emphasis supplied)

Based on the responses here, that's a lot larger group than just FF Ekstrum himself.

I prefer to avoid going on calls with people who are that distraught but who might try to B.S. their way through the situation. That's a lot more dangerous to the rest of that FF's crew than someone who is honest enough to realize that he needs to go home because he's not ready to go on calls right now.

Ignorance is not always bliss, sometimes it's just a false sense of security.

Permalink Reply by WestPhilly on February 26, 2011 at 9:23am
I know what Al said. I wasn't commenting one way or another on Al's take on this issue.

Yes, I agree. Far better to not go on call at all, than to go and then fall to pieces. But not as good as going - despite your fear - (or whatever it was) and doing your job.

I'm not willing to throw this guy under a bus, I just hope that since he decided he needed to go home, he stays home.

Permalink Reply by Ben Waller on February 26, 2011 at 10:29am
Got it - since my comment was in response to Al, I wasn't sure if you were commenting on exactly the same thing.

I agree that the retired FF in question should stay retired, but he's earned that retirement.

It's over and it should stay over.

I agree, but he sure did take the shine off that earned retirement.