CHARLESTON, S.C. - Attorneys for the furniture store where nine Charleston firefighters perished two years ago want the city of Charleston added as a defendant in a wrongful death lawsuit. 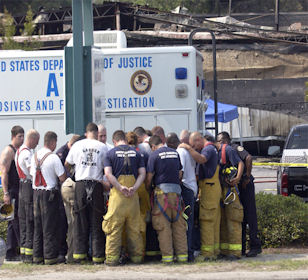 Firefighters from Charleston and surrounding areas pause for a moment of prayer in front of the rubble of the Sofa Super Store and warehouse, June 19, 2007, in Charleston, S.C., after a fire in the store claimed the lives of nine firefighters. (AP / Stephen Morton)


Attorneys for the Sofa Super Store, already a defendant in the suit by families of eight of the nine victims, allege the city was "grossly negligent, reckless and/or willful and wanton" about the safety of the firefighters who died at the store on June 18, 2007.

An attorney for the city said it can't be a defendant in part because wrongful death claims have already been settled under workers' compensation claims, and the families of the eight firefighters also oppose bringing in the city. A hearing is set for Monday.

The families of the nine who perished have received from about $640,000 to $775,000 each from workers' compensation and from a public fund, city spokeswoman Barbara Vaughn said Friday. Last year, 12 of the 30 original lawsuit defendants settled for an additional $5.6 million divided among eight families who sued.

The lawsuits named the furniture store as well as various contractors and furniture companies as defendants. Best Chairs, Inc., another defendant, also wants the city added as a defendant.

"Information obtained relevant to this case reveals that the city contributed to all or a major portion of the damages asserted in this case," according to a motion by the store. "The defendants seek equitable allocation of fault to the city as will be supported by the evidence presented at trial."

Inadequate training, outdated tactics and aging equipment lead to the firefighters', according to a report last year by a panel of experts appointed by the city. That report also said the firefighters did not follow standard safety practices and had obsolete equipment.

But it also said the blaze, likely caused by discarded cigarettes, would have been confined to a loading dock where it started had sprinklers been installed in the building, a former grocery store.

The city said workers' compensation settlements exclude other remedies for plaintiffs, including going to court.

She noted that for two years the city has been responding to "various legal threats" as well as Freedom of Information Act requests and subpoenas by parties in the case.

The city provided 9,600 pages of documents and 8,900 photographs and was notified of a motion to bring it in as defendant two days before the statute of limitations expired, she wrote.

Permalink Reply by Kenneth Holley on August 2, 2009 at 7:17pm
If i were to write what i feel right now i would probably be banned from this site!

Permalink Reply by scott stribling on August 3, 2009 at 10:58am
We are such a litigious society!