What is the best way to get rid of toxic chemicals including: 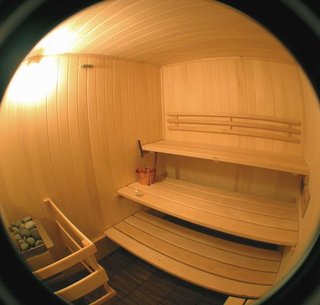 Sweat therapy using saunas has been extensively researched and shown to be effective at lowering levels of fat soluble chemicals. One study observed an average reduction of 21.3% of 16 different chemicals in adipose tissue samples following sauna therapy. Interestingly, a follow up measurement four months after completion of the sauna program detected an average reduction of 42.4% for the same 16 chemicals.

This post-treatment reduction has led some physicians to speculate that the program was rehabilitating for the body’s natural mechanisms of elimination.

Many physicians concluded that sauna therapy certainly does provide this rehabilitating effect. The Bio-Toxic Reduction Program reported that dozens of patients experienced significant reductions in body toxin levels and improvements in a wide array of medical conditions.

(Measuring for chemicals such as DDE, xylene and toluene, he detected blood toxin reductions between 70 and 99%)

The vast array of chemicals to which we are exposed can be categorized as either water or fat soluble (dissolving in either water or oil). While our bodies are reasonably competent at metabolizing and excreting water soluble chemicals, we are far less capable of eliminating fat soluble compounds from our system. As a result, fat soluble toxins (which account for the majority of environmental toxins) are deposited in the fat components of our bodies. This is something that should concern ALL firefighters because if you can still smell smoke coming out of your pores after the fire then you have been exposed with long term concerns with the development of health related issues.

Given that the membrane of each of our trillions of cells is comprised of fat, these toxins can reside in most organs and systems of the body including the brain and nervous system. This process of toxin retention is known as ‘bio-accumulation’.

Toxins, however, are not permanently bound within our fatty tissues but instead tend to recirculate in our bodies creating an endogenous exposure; which is a ‘poisoning from within’ effect.

This re-circulation occurs in response to everyday events such as:

As firefighters, we routinely experience any or all of the above during the normal course of our duties. Couple this with active firefighting and you enhance the problem(s).

These circulating toxins can produce a variety of symptoms including:

Have you ever experienced any of the above?
The purpose of this post is to let you all know that as firefighters, we do run the potential of getting exposed to things that burned up in a fire. This process of burning something or hydrolysis enables things to breakdown to their smallest molecular level, combining with other things that were consumed by fire. It's the smoke from things burning that combines to formed unburned radicals. Chemical compounds that contain heavy metals, pesticides, organic vapors & mists, hydrocarbons, arsenic, formaldehyde and on and on.
I first heard about sauna therapy for firefighters at the National Fire Academy years ago. It seemed that the Shreveport Fire Department responded to an above ground electrical vault fire that involved PCB's. Several firefighters were exposed and were sent to a detoxification clinic in Beverly Hills. Here's the rundown for those not familiar with this landmark case history of firefighters getting exposed to hazardous materials.

In April, 1987, dozens of Shreveport firemen were exposed to PCBs when they responded to an early morning transformer explosion at the Louisiana State University Medical Center. In the aftermath, some began to complain of headaches, dizziness, skin rashes, memory loss and other symptoms that they attributed to the exposure.

Blood and tissue tests by the university medical center showed no abnormal levels of PCBs in their systems. But the firemen wondered if the university was trying to protect itself from liability because the explosion had occured there.

Searching for alternatives, one of the firemen came across an article in Fire Engineering magazine. Headlined "Chemical Exposure in Firefighting: The Enemy Within," it was written by Gerald T. Lionelli, "senior research associate for the Foundation for Advancements in Science and Education."

Lionelli discussed the frightening consequences of chemical exposure and then got to the point. He said the foundation had found an effective detoxification technique developed by "the late American researcher L. Ron Hubbard" and delivered by HealthMed Clinic. (1)

The treatment purports to purge drugs and toxins from a person's system through a rigorous regimen of exercise, saunas and vitamins -- a combination intended to dislodge the poisons from fatty tissues and sweat them out, using both aerobic exercise and saunas. (1)

Physicians affiliated with this detoxification regimen have touted it as a major breakthrough, and a number of patients who have undergone the treatment say their health improved. But some health authorities dismiss Hubbard's program as a medical fraud that preys upon public fear of toxins. (Full Story)

Not wanting to get into whether or not L. Ron Hubbard was on to something or not, the outcome, again, from what I recall being taught when at the National Fire Academy was that the majority of the health issues if not all went away after the firefighters went through the detoxification program. I should also note for the record that I am a Lutheran... just sayin'
From what I can remember, the regiment for the program included (and not in this order):
A study about the program years ago talked about the first time they conducted the testing, using men from various fields, all having in common chemical exposure. Some of the participants included:
All of these men went through the regime, which included the sauna. The first time all the men sat in the sauna, in less than 15-minutes, the sauna smelled like chemicals and had to temporarily evacuated because of the off gassing occurring inside the sauna. It worked. Over time, and under the care and supervision of a doctor, the saunas produced actual metal chips coming out of the pores of the metal plating worker and chemicals were reported to have leached out of the skin of the plant worker. The firefighter from LAFD that had been exposed to chemicals and slated to be medically retired was able to return to work full duty with 100% of the chemicals rid from his body.
Like any post, my point here is to educated and stimulate discussion about the things one can do to detoxify his or her body from the consequences of doing this job... I personally have experienced a hot shower after a fire and smelling the soot coming out of my pores. I've tried it in a hot wet sauna and the experience minimizes the number of days you actually can smell the smoke coming out of your pores and hair.
Hopefully, I've convinced some of you to at least consider using a sauna after a big fire, or any fire for that matter. Why not try to get rid of something that over time can bioaccumulate and cause cancer(s)? 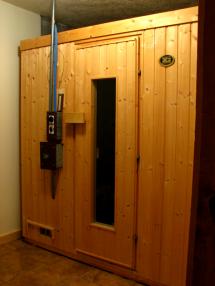 Assuming you are now on board and support the concept, my key point here is that for firefighters, we have no business using a sauna that is made of wood. The wood can absorb the off-gassed toxins, possibly exposing others... The correct thing to do is to use and if you have the resources, construct your own using tile to enable a thorough decontamination of the sauna. 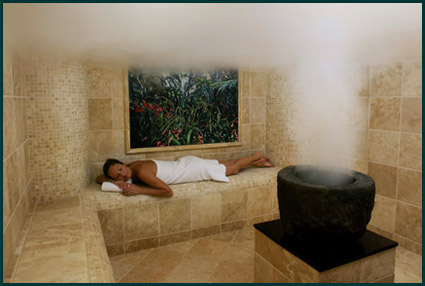 You also want to ensure that their is adequate ventilation through the use of both passive and engineered ventilation. 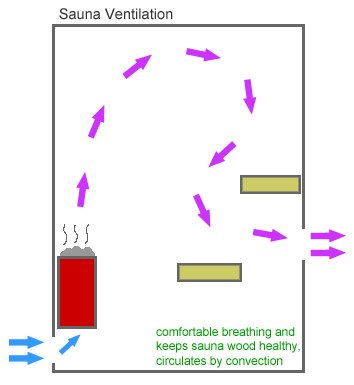 Mechanical ventilation should be no less than the standards for a H-Occupancy, which is a hazardous occupancy by definition of the Uniform Fire Code and Uniform Building Code. This standard for H-Occupancies calls for 1 cubic foot of air to be moved for every cubic foot of floor surface area. 100 cubic foot room requires a minimum of a 100 cubic foot ventilation fan.
Should the off-gassing become too much, just opening the door to ventilate the sauna isn't enough... This includes clean out of the sauna where you are going to want to ensure all smells (vapors) go away. This is also beneficial when using a strong bleach to clean the room. Exhausting the fumes into the atmosphere is a lot nicer than the inside of your fire station.
References:
World Trade Center rescuers undergo the detoxification discussed in this post. Very detailed explanation of what is actually involved in the doctor supervised program. You may be able to take this information alone and show it to your personal physician.
http://www.bodyhealthsolutions.com/sauna-detoxground-zero/
Note:
On the surface, it appears to me that L. Ron Hubbard came across something pretty cool as far as detoxifying the human body. The problems started occurring because he charged outrageous amounts of money to do something so very simple. Connection with the Church of Scientology didn't do much to lend to the credibility factor...
Still, I challenge anyone to try and spend time in a sauna post structure / wildland fire. You just might feel better and get rid of any uncomfortable signs and symptoms of toxic exposure.
Important: Hydrate, hydrate, hydrate...
Stay safe and healthy,
CBz

Permalink Reply by Paul Spencer on June 23, 2011 at 9:23pm
Thanks for the post. I too have been amazed with what comes out of my skin many days after a big fire. I hope we are getting better as an industry at staying out of the smoke, now that the smoke is so much more toxic than when I started years ago.

Permalink Reply by Mike Schlags (Captain Busy) Retd on June 23, 2011 at 10:52pm
Don't think it's possible. The most dangerous time to get exposed is during mop up when there is no smoke. Just invisible clusters of recombined unburned radical compounds that we inhale, absorb through our skin or ingest orally during mop up. Don't be lulled into complacency just because you can't see smoke...

Permalink Reply by Paul Spencer on June 23, 2011 at 11:22pm
Thanks Brother, we're on air now in mop up mostly for that very reason. Where I've gotten caught is at the pump panel and smoke rolls over me as I am not paying attention. I have had my worst smoke inhalation problems while on the attack engine pump panel. Go figure. That's one of the reasons I like for engineers to pack up. Thanks for your Tons of awesome input on firefighter nation!

Permalink Reply by Mike Schlags (Captain Busy) Retd on June 24, 2011 at 11:01am
Now I'm feeling that warm fuzzy feeling described by Jack and John last week on another of my posts. Your a sweety Bee.