Rules of Engagement for Structural Firefighting 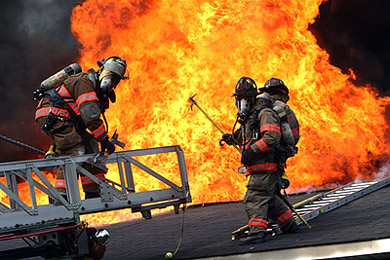 The International Association of Fire Chiefs (IAFC) is committed to reducing firefighter fatalities and injuries. As part of that effort, the IAFC Safety, Health and Survival (SHS) Section has developed DRAFT “Rules of Engagement for Structural Firefighting” to provide guidance to individual firefighters and incident commanders regarding risk and safety issues when operating on the fireground.

The intent is to provide a set of model procedures to be made available by the IAFC to fire departments as a guide for their own standard operating procedures development.

Early in development the rules of engagement, it was recognized that two separate rules were needed –one set for the firefighter, and another set for the incident commander. Thus, the two sets of rules of engagement described in this document. Each set has several commonly stated bullets, but the explanations are described somewhat differently based on the level of responsibility (i.e., firefighter vs. incident commanders).

The draft documents are currently open for public comment until the FRI conference in Dallas (August 25‐29, 2009).

The reader may direct comments to Chief Gary Morris, the project lead, at
mercurymorris@hotmail.com.

Permalink Reply by Art "ChiefReason" Goodrich on August 5, 2009 at 12:02pm
BLPS:
I will only add to what Ben said with: Paul Grimwood has proven time and time again that you and your hose will NOT put more fire out than a stretched 2-1/2 or more.
Because, if you are not putting enough water on the fire to suppress it, then the fire is growing, which takes more water; more than you have in your hose.
You have to apply enough water.
And you should know that I am from the Safe Extinguishment Culture.
TCSS.
Art

Permalink Reply by B.L.P.S. 13 on August 5, 2009 at 12:40pm
Well, herein lies the problem. The time it takes for a 2 1/2" to be properly stretched and the excessive amount if manpower it takes to lug it around completely defeats the purpose of a fast and aggressive interior attack. I would feel confident saying that 3-4, 1 1/2" handlines could be stretched to the 3rd floor of an apartment building before any 2 1/2" line could be placed into operation. The less time a fire is allowed to burn, the less it grows and ultimately, the less damage it does. The only thing 2 1/2" lines are good for is bailing large amounts of water through windows from a safe distance. At that point you have already surrendered and let the fire control your operation. You have lost the initiative and the battle.

Permalink Reply by Ben Waller on August 5, 2009 at 1:36pm
Once again, I'm sure that the FDNY and many other departments who use 2.5 inch lines offensively - and with great success - would disagree with you.

Using small-caliber lines when large-caliber lines are indicated for interior attacks can contribute to very grim consequences...June 18, 2007 is an example. Using room-and-contents hoselines and tactics for large, enclosed structures tends to have equally grim outcomes.

Stretching a 2.5 inch line dry isn't much more difficult than stretching a smaller line dry. Trained crews can do it essentially as fast. Try combining two engine crews on a single 2/5 inch line and see how much faster they can stretch it than they can get two 1.5 inch lines into operation, even on the 3rd floor of an apartment building. If you are stretching a 1.5 inch line up three flights of stairs wet, you're giving your crews an unnecessary beating before they get near the fire.

Stating "The only thing 2 1/2" lines are good for is bailing large amounts of water through windows from a safe distance." is a oft-debunked fallacy.

Permalink Reply by B.L.P.S. 13 on August 5, 2009 at 2:43pm
I'm not sure of how your jurisdiction compiles its assignments for a structure fire, but ours uses 5 engine companies, 2 truck companies, a rescue squad and two chiefs. The 5th engine is committed as part the RIT company. So within a matter of minutes these companies can deploy 2 lines to a fire floor and 2 more wherever else they are needed. There is no way you can tell me, with complete confidence, that any 4 engine companies deploying 2 1/2" hose could do the same. Furthermore, if you need to redeploy your resources to advance the fire attack, a 2 1/2" hose basically cripples that effort because it requires so much manpower to move it. We all know manpower is a critical resource that should not be wasted. If it us wasted in large diameter hand lines, it allows the chance that other critical tasks are not being completed in a timely manner.

Same manpower, more water, more firefighting power, and equal or better mobility because the six firefighters can spread out more along a single 1-1/2 than they can on two 1-1/2's.

Either way, the same amount of manpower is involved in the hose stretch, so there's no "wasted" manpower.

My department uses no structural line smaller than 1-3/4 and our smallest structural nozzle is a 50 PSI, 150 GPM fixed gallonage combination tip. We use those lines situationally, but we also use 2-1/2, with a 50 PSI, 250 GPM combination or 50 PSI, 265 GPM smooth bore tip when it's called for. The 2nd engine assists the 1st engine with the hose stretch when it's appropriate and situationally called for by command. When you have working fires in strip malls, apartments-over-commercial, churches, or the local big box store, the bigger lines will generally get the fire knocked down prior to needing to reposition the lines.

Permalink Reply by B.L.P.S. 13 on August 5, 2009 at 5:41pm
No, no six man wagons here. The engine company has a compliment of 4 men. Officer, technician and two firemen. We run all types of construction and configuration from the 1 story detached to the commercial warehouse and everything in between. All I'm trying to say is, the 1 1/2" line is far superior in ease of deployment as well as manuverability which more than makes up for it's GPM delivery. If it can't be done from the inside with an 1 1/2" then by all means, dump all you have through a window while positioned a safe distance from the ultra hazardous life of real firemen.

Permalink Reply by B.L.P.S. 13 on August 5, 2009 at 6:01pm
Maybe I gave a misleading statement. Anyone can stretch dry hose, regardless of its diameter. However, the ability to manuver after the initial knock down is severely hampered when using 2 1/2" lines. 1 1/2" lines can rapidly redeploy at will while the larger, more cubbersome counterparts get stuck and extra manpower is wasted attempting to reposition them.

Permalink Reply by Ben Waller on August 5, 2009 at 7:44pm
The trade-off of the quicker knockdown with better stand-off distance that 2-1/2 gives you gives you the option of extending the line with a smaller-caliber line for mop-up if you need the maneuverability later on.

Two officers and four firefighters from two different engine companies, and voila, six firefighters advancing the 2-1/2 line. Or, are "real firemen" so dogmatic that they can't join another company on the line when the situation calls for it?

Permalink Reply by B.L.P.S. 13 on August 5, 2009 at 8:30pm
Each company has seperate tasks that need to be accomplished. No where in our general orders does it allow room to waste two engine companies to stretch one line. It's just counter-productive and a foolish waste of valueable resources.

Permalink Reply by Ben Waller on August 5, 2009 at 8:53pm
BLPS, Applying more GPM per firefighter is most definately not "counter-productive and a foolish waste of valuable resources"????

It's a lot more "counter-productive and wasteful of resources" to have two seperate engine companies competing for the same hallway or stairwell with two small lines so they can let the fire advance farther and apply fewer GPM per firefighter with more risk.

"Each seperate company has tasks that need to be accomplished"???

Both engines are assigned to fire extinguishment when they're advancing lines on the interior. Whether they do it with two small lines or one big one, they're still performing the same task. We're not talking task specialization here, we're talking how we extinguish the fire. I suppose that next you'll tell me that the building must be "far gone" before we should use 2-1/2 lines or something like that.